Univision’s anchors, perpetually on the hunt for “news” to fit their political agendas, have now painted a bullseye on Florida Governor Ron DeSantis. Case in point: its sympathetic coverage of a lawsuit filed by Florida's largest teacher’s union against DeSantis. Only one point of view was offered: that of a teacher and union activist who actively campaigned for Bernie Sanders and Joe Biden.

Ingrid Robledo, a middle-school teacher who per her Twitter bio also serves “as FEA Governance Board, UTD Executive Board, Chairwoman FEA Minority Affairs & FEA Hispanic Caucus, Organizer & Activist”, played on anchor Carolina Sarassa's framing of the measure as a “death sentence” for all parties involved. Take a look at how it went on this July 22, 2020 report over Noticiero Univisión Edición Digital:

CAROLINA SARASSA: You basically said that going back to schools would be a death sentence.

ROBLEDO: But decisions are being made at the (statewide) level, something truly terrible because nothing and no one is above the law.

In addition to the “death sentence” angle, twice in the report both the anchor and her guest emphasized how terrible and reckless DeSantis was, with Sarassa stating that “Florida's largest teachers' union had filed a lawsuit against the governor of that state, Mr. Ron DeSantis, saying that reopening as early as the fall would be reckless,” and the “organizer and activist” adding that decisions made at the (statewide) level are “something truly terrible because nothing and no one is above the law.”

True. No one is above the law, nor pretending to be in this particular issue, and no one in Univision's audience – especially the parents of children who are being deprived of their education in the name of political agendas – deserves to hear one-sided, politically charged reporting with no pushback nor opposing views. Univision’s viewers did not hear from Hispanic parents who want schools to open, nor from experts with views on how to safely make that happen, nor from anyone from the DeSantis Administration.

Given how the network has reported on the coronavirus pandemic and school reopening debate, it’s not a stretch to say that Univision, a radical immigration advocacy PAC with a broadcast license seeking government permission to become a foreign-owned entity exercising undue influence in our electoral process, supports and advocates for infinite lockdowns.

Advertisers who enable 24-7 bias in Hispanic news need to be called out. Click here to contact Taco Bell, one of the regular advertisers on the Spanish-Speaking television, to express your concern.

Press on "expand" to read the complete transcript of the segment mentioned above:

CAROLINA SARASSA: Speaking of figures, in the past 24 hours about 10,000 cases of people infected with coronavirus have been reported in the state of Florida- for several consecutive days. The national topic comes in the midst of all this: the reopening of schools. That's why Florida's main teachers' union has filed a lawsuit against the governor of that state, Mr. Ron DeSantis, saying that reopening as early as the fall would be reckless. But to tell us a little more about the reactions to this, we are now connecting to the epicenter of the epicenter of the pandemic- Miami-Dade- with the teacher Ingrid Robledo. How are you? Welcome to "Digital Edition". You basically said that going back to schools would be a death sentence. Tell us more.

INGRID ROBLEDO: Well. The fact that students report to the school, as well as teachers and faculty and administrative staff, means that the possibility of infection has opened up. Let's not lose sight of these students returning home, they go back to their parents, their grandparents. And if they are carriers of the virus then we are simply spreading the epidemic. And that's terrible because the interaction in the classroom is so personal that direct contact with students is unavoidable, especially since in classrooms, there are so many students who participate and

the teacher interacts there almost in a maternal way. So, the possibility of going back to the classroom is totally wrong, given the very drastic circumstances that we are living.

SARASSA: These are drastic moments indeed. If you were told, “schools are going to open their doors five days a week”. What do you plan to do; are you going back to school?

ROBLEDO: You said something before. When I signed a contract with Miami-Dade County Public Schools, I never signed a contract for a death sentence. I do my job and do it in the best way. All teachers want to get back in touch with our students once the requirements are met that there is no risk, the number of infected persons decreases, and that we have personal protective equipment. None of that is in place after (the issuance of) orders without the necessary funding and measures that are being taken at the superintendent and school board level. But decisions are being made at the (statewide) level, something truly terrible because nothing and no one is above the law. And they are modifying absolutely everything and altering a process that could be very specific and beneficial to all who take the measures.

SARASSA: If Florida Governor Ron DeSantis has the chance to hear this interview, what would you like to tell him? Briefly.

ROBLEDO: First of all, that he must take care to make coherent decisions because of the situation; and delegate to the superintendents and school boards of each of the districts so that  they are the ones that, according to the specific circumstances of this district, make

the decisions that need to be made. But he can absolutely not impose a decision of that magnitude, where the lives of an entire community are placed at risk. When schools open up, the community opens up because we are the heart of that community. So be careful and consistent with the circumstances before imposing any decision.

SARASSA: And later we will continue this very interesting conversation with you. I agree they are the heart of the community. Ingrid Toledo, Miami-Dade County teacher. Thank you very much. There’s more ahead. 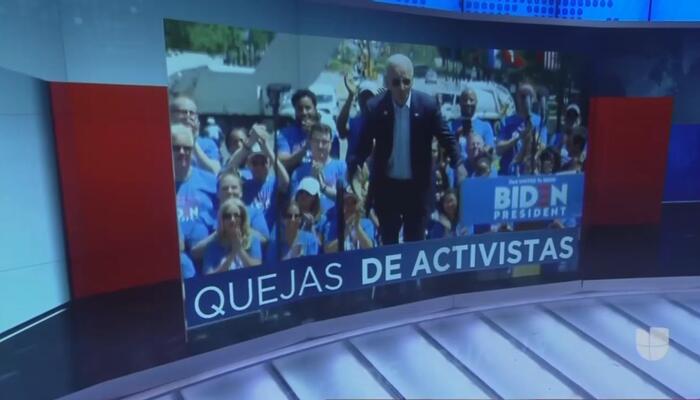 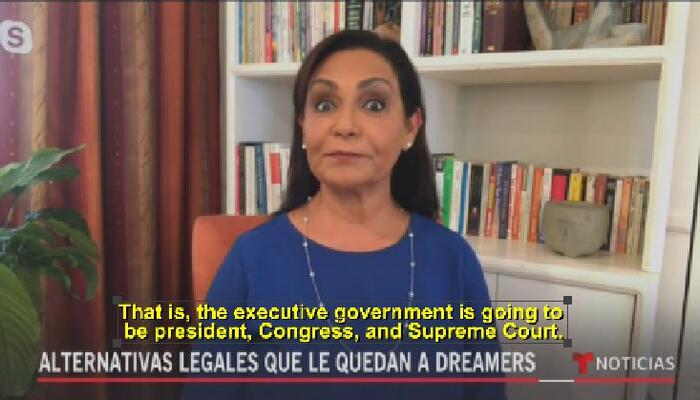 Latino
Telemundo Has a Sad Over New DACA Procedures 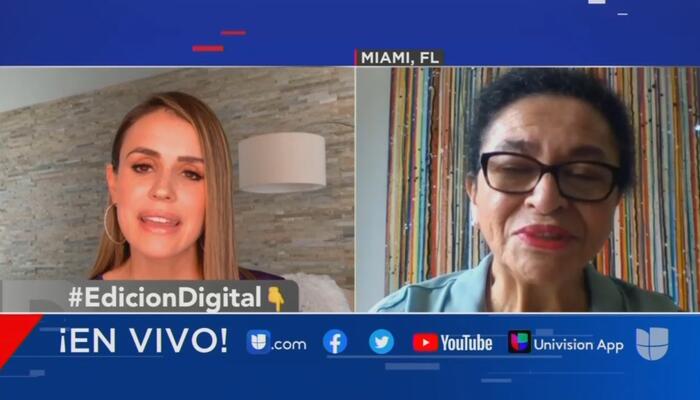 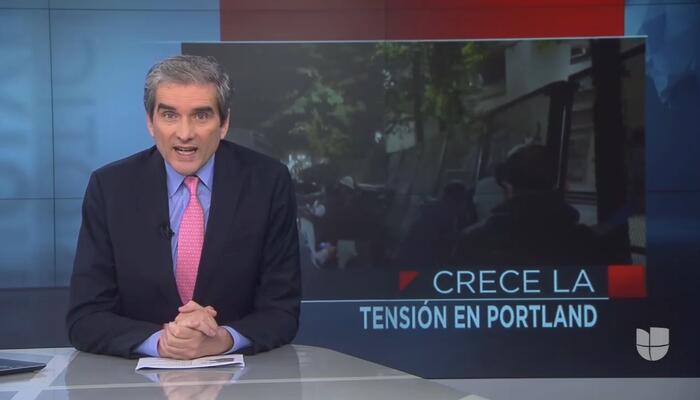 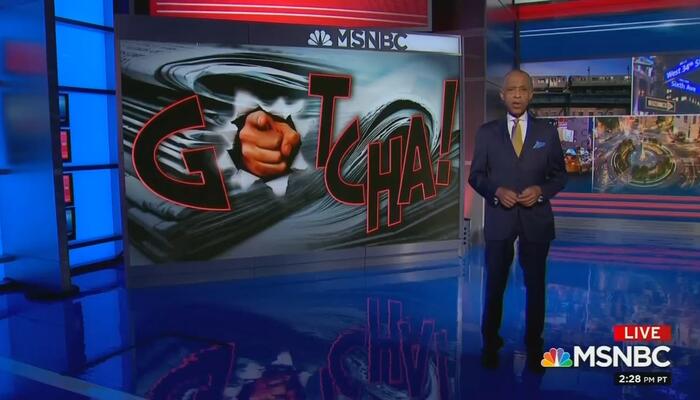 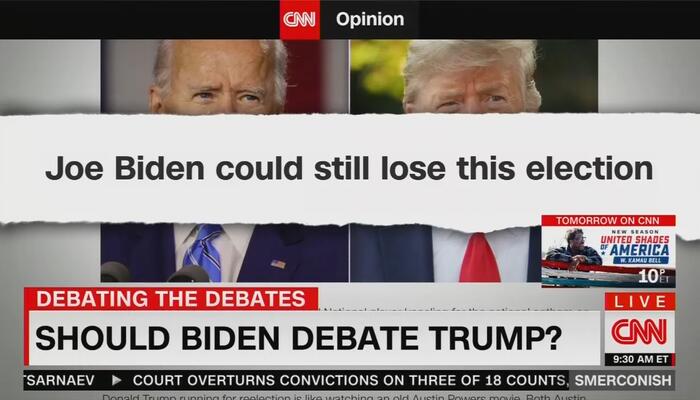