For those unaware: Axios Latino, a joint venture with Telemundo, is a twice-weekly feature aimed at English-dominant Hispanics in the United States that promises, per its initial press release, to:

Latinxios largely mirrors their counterparts in Spanish-language media in that its content is heavy on Mexico, immigration, identity politics and progressive policy. But as part of that curation of "best stories highlighting Latino perspectives", reporter Russell Contreras saw fit to publish an item titled, "Hispanic Heritage, Cuba's Literacy Legacy". Anti-communists will immediately identify that headline (as well as the rest of the piece) as one of the left's favorite go-to's when whitewashing the legacy of the murderous Castro regime. "But literacy!" "But child mortality and universal healthcare!" they reflexively shout as they attempt to drown out images of Havana literally crumbling, and of the regime brutally suppressing the voices of those who cry out for freedom. 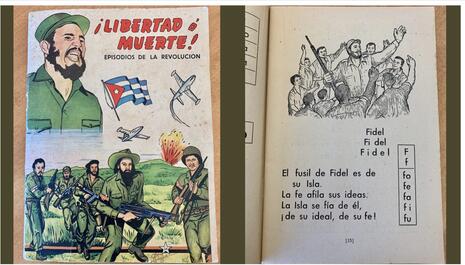 Missing from the piece is the fact that the "Patria o Muerte (Homeland or Death) Literary Brigades" were mainly a propaganda instrument led by murderous, racist homophobe Ché Guevara. The brigades, under the guise of eradicating illiteracy, spread revolutionary indoctrination throughout rural Cuba while furthering Fidel Castro's cult of personality. Contemporaneous propaganda even characterized the success as a blow to America, and further illustrated the point via a depiction of a brigadier driving a giant pencil through the heart of a bald eagle. (More imagery here, thanks to our friends at Babalú Blog.)

Cuba's literary history, a supposed focal point of the Axios piece, long preceded the murderous Castro regime and its literacy brigades. Thus, the piece serves no other purpose than to whitewash a key component of the communist Castro dictatorship before shoehorning it into Hispanic Heritage Month.

There may be some, among Latinxios' readers or staff who choose to embrace the murderous Castro regime as a part of their "Hispanic Heritage". But as for me and my house, that's going to be a hard pass.