In the run-up to the first debate among the Democratic presidential candidates, frontrunner Hillary Clinton sat down with Telemundo anchor María Celeste Arrarás for a tough, hard-hitting…ah, who are we kidding? The whole thing was practically a Hillary campaign commercial.

The last time Arrarás was on our radar, she was misappropriating portions of the Pope’s speech to Congress in order to slam conservatives that are both descended of immigrants and opposed to amnesty as “hypocrites”. Arrarás didn’t do that this time, choosing instead to cast herself as the host of a short-form political infomercial. 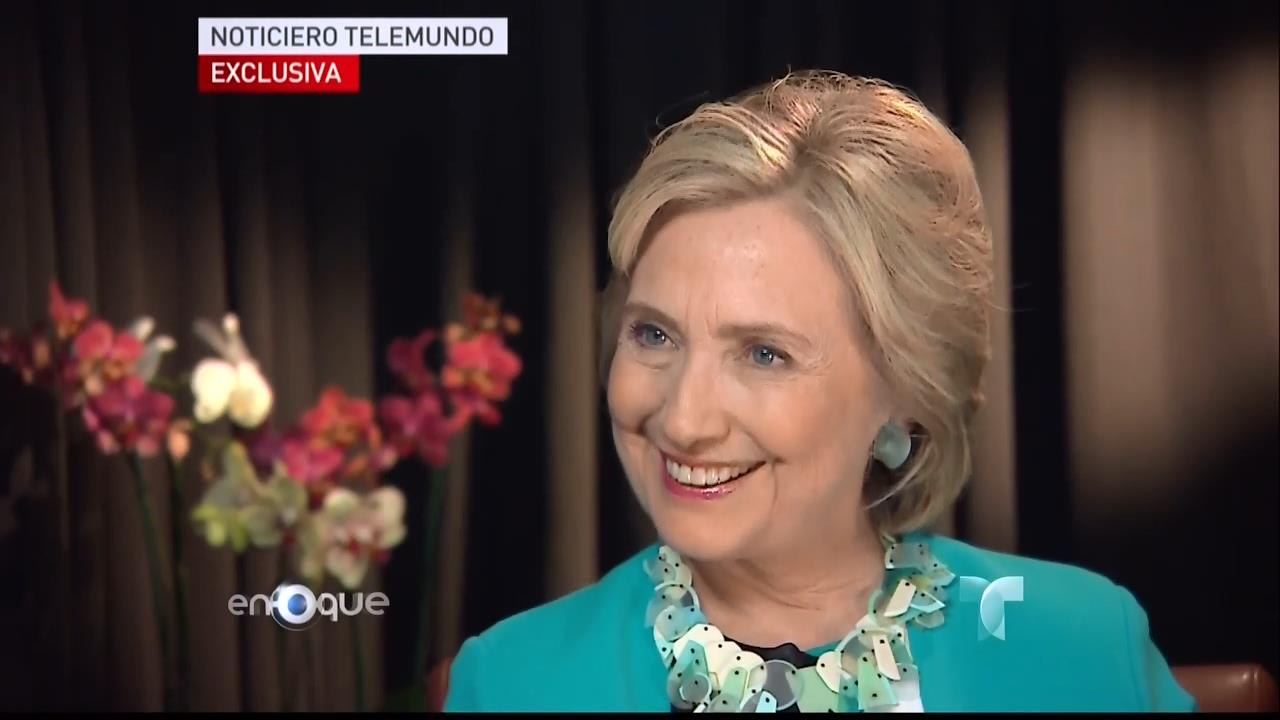 The scope of Arrarás’ tee-ball questioning was very narrowly limited to the campaign, immigration, Donald Trump, and to some Clinton Restoration daydreaming. I scoured the entire transcript (courtesy of Telemundo News), and failed to see the words “email”, “scandal”, “foundation”, “reset”, or “Benghazi”.

Did Arrarás make the editorial decision that these matters were not salient to Telemundo’s viewers, or did that call come from elsewhere? In any case, her viewers were done a cruel disservice by being subjected to such tumescent questions such as this one:

MARIA CELESTE ARRARAS, TELEMUNDO ANCHOR: Very well.  On Donald Trump, of all the inflammatory comments he-- he's made about Hispanics, (SIGH) which one was the most shocking to you?

Yes, Madame Secretary, which of Mean Old Trump’s Very Mean Statements did you find to be the Meanest? That was Arrarás’ follow-up to a question about Clinton’s plans to “eradicate” the “pay-gap” for Hispanic women, in which the very first proposal was to suggest an increase in the minimum wage.

It would have made sense to raise the counter-argument about the deleterious effects of such a wage increase on small businesses, given that the largest increase in business ownership is among Hispanic women. But that would cut into feeding Clinton the Trump question, and its subsequent stoking of continued racial grievance.

There were also no follow-up questions on Clinton’s statements regarding amnesty for DUI offenders. But the biggest Easter egg left by Clinton here is the claim made in response to Arrarás’ second question- which can best be summed up as “why do Hispanics love you so?”

HILLARY CLINTON: I wanna stand with and fight for the Hispanic community across our country because I know-- I-- I-- I have known people who were-- working in the fields near where I grew up in Chicago and their children through my church when I was just a young girl.

Shades of coming under enemy fire in Kosovo, or legit? I don’t know, but I’d never heard such statements before, and Clinton has been in the public limelight for a very long time.

Telemundo’s recent announcement of its commitment to “journalism without an agenda” is laudable, as is its premise that Hispanics are fully capable of deciding facts for themselves. However, this interview of Hillary Clinton is proof positive that there remain clear areas of opportunity before the promise of #yodecido (“I decide”) is fulfilled.

MARIA CELESTE ARRARAS, TELEMUNDO ANCHOR: You have been consistently-- dropping in the polls lately.  And yet when it comes to the Hispanic community, you are very much liked.  And you're the clear favorite.  What do you think that Hispanics see in you that maybe other voting groups don't see as clearly?

HILLARY CLINTON: I think that Hispanics know I'm a fighter.  And there's a lot that we have to fight for and fight against right now.  I believe that the inflammatory, hateful rhetoric coming from Republican candidates running for the White House-- is mobilizing the Hispanic community, as it should.

And it certainly is very much on my mind as I talk about what I wanna do as president.  I wanna stand with and fight for the Hispanic community across our country because I know-- I-- I-- I have known people who were-- working in the fields near where I grew up in Chicago and their children through my church when I was just a young girl.

And I have so many dear friends, and colleagues, and people who have contributed so much to this country.  I've had the privilege of meeting dreamers who are just the most exciting, dedicated group of people.  And I wanna be a spokesperson, a strong voice on behalf of the needs, the interests, and the rights of Hispanic people here in the United States.

MARIA CELESTE ARRARAS: On immigration, you have said that you're willing to further than President Obama if Congress fails to act.

MARIA CELESTE ARRARAS: I would like you to be very specific about how far is further.

HILLARY CLINTON: Well, you know I believe in comprehensive immigration reform.  And it would include in my plan a path to citizenship, which I think is absolutely essential.  That is the goal.  But if we still are working toward it, fighting for it, then I want to do everything in my power not only to continue-- the executive orders that-- President Obama has put forth, DAPA., and DACA, and the kinds of changes that he has made.

But I want to do more on an individual basis by putting more resources, more personnel into the system to try to help as many people as possible get a different status.  I will not be deporting parents.  I will not be breaking up families.  I will not be doing what we've seen too much of, which is tryin' to, you know, make immigrants the scapegoat for everything that people are concerned about in the country.

And the best way to do that is to build on what we have accomplished, keep fighting for comprehensive immigration reform, and then use the tools that exist for more individual determinations about how to keep more people who are hard working, contributing people in our country while we still-- fight over the comprehensive immigration reform-- plan.

MARIA CELESTE ARRARAS: Some may argue that-- President Obama did as much as he legally could with the executive action, and that th-- those executive actions are still in the courts-- and that you may have to do some legal homework in order to do more than he did to justify doing more.  What do you say to them?

HILLARY CLINTON: Well, it has to be legal.  There is no doubt about that.  And I am a strong supporter of what the president did because it was legal.  It was necessary.  It was important.  And I believe it was rooted in the presidential authority that he relied on.  But even within existing immigration law, there are provisions for trying to determine-- who can stay in the country, to try to change the deportation-- rules and regulations.

That's within existing authority within the executive branch.  I'm gonna look for every legal way I can find to make sure that we don't intimidate and terrify hard working immigrant families.  That they know that they will not have to worry about a knock on the door or a raid on their workplace.  Because I just don't think that's the right thing to do.

MARIA CELESTE ARRARAS: You don't think that President Obama has done that?  Because there's a lot of emphasis and a lot of-- interest in your-- concept of doing further than he did.

HILLARY CLINTON: Right.  I think he's done a lot.  But I also think because the deportation laws were-- interpreted and enforced, you know, very aggressively-- during the last six and a half years, (NOISE) which I think his-- administration did in part to try to get Republicans to support comprehensive immigration reform.

It was-- it was part of a strategy.  I think that strategy is no longer workable.  So therefore I think we have to go back to being a much less harsh and aggressive-- enforcer.  We need to, of course, take care of felons and violent people.  I mean, that goes without saying.

But I have met too many people in our country who were upright, productive people who maybe had some, you know, minor offense.  Like, you know, maybe they were-- arrested for speeding or they had some kind of-- you know, one incident of drunk driving, something like that 25 years ago.

And they were hauled in and deported.  And I've met their wives and their children.  And I-- I just don't believe in that.  I think everybody is entitled to a second chance.  And I don't wanna see families disrupted, families deported.  I wanna see comprehensive immigration reform.  And I'm gonna do everything I can as soon as I get into office to push on that.

But in the meantime, I'm not gonna be breaking up families.  And I think that is one of the differences.  But I totally understand why the Obama administration felt as though they did what they did under the circumstances.  But I think we've learned that the Republicans, at least the current crop, are just not acting in good faith.

MARIA CELESTE ARRARAS: I know you're big on closing the income inequality gap. And, as you know, when it comes to Hispanic women, that is even wider.  The gap is wider.  Hispanic women make 50 cents-- 56 cents to every dollar that white non-Hispanic men makes.  What would you do to eradicate that injustice and particularly for Hispanic women?

HILLARY CLINTON: Well, first of all, we have to raise the minimum wage.  And that will affect a lot of women.  Because two thirds of all minimum wage workers are women.  And a good percentage of that happens to be Hispanic women.  So by raising the minimum wage, getting a decent-- wage so that people who work hard should not end up in poverty when they have worked a full-time job will be my first priority.

I will be very aggressive in doing that.  I don't want any woman to be treated unequally with discrimination when it comes to her wages and her benefits.  And we have a long way to go to raise up the average wage of Hispanic women.  But I will start on that from the very beginning.

MARIA CELESTE ARRARAS: On Donald Trump, of all the inflammatory comments he-- he's made about Hispanics, (SIGH) which one was the most shocking to you?

HILLARY CLINTON: Probably the very first one.  You know, calling undocumented people rapists and criminals.  That was just so prejudicial--

HILLARY CLINTON: Well, I was furious.  And I was-- first, I was-- I thought, "Well, maybe I misread this.  Maybe I misheard this.  Why would he say something like that?"  He l--

MARIA CELESTE ARRARAS: He said that-- he said that he was mis-- misread.

HILLARY CLINTON: Well, I don't know. I mean, I-- it sounded like he said what he said.  And then he just kept doubling down and-- and-- criticizing and in my view sort of putting hate-filled rhetoric-- into the presidential campaign.  He, as you know, has gone after Mexicans, immigrants, Muslims, women...