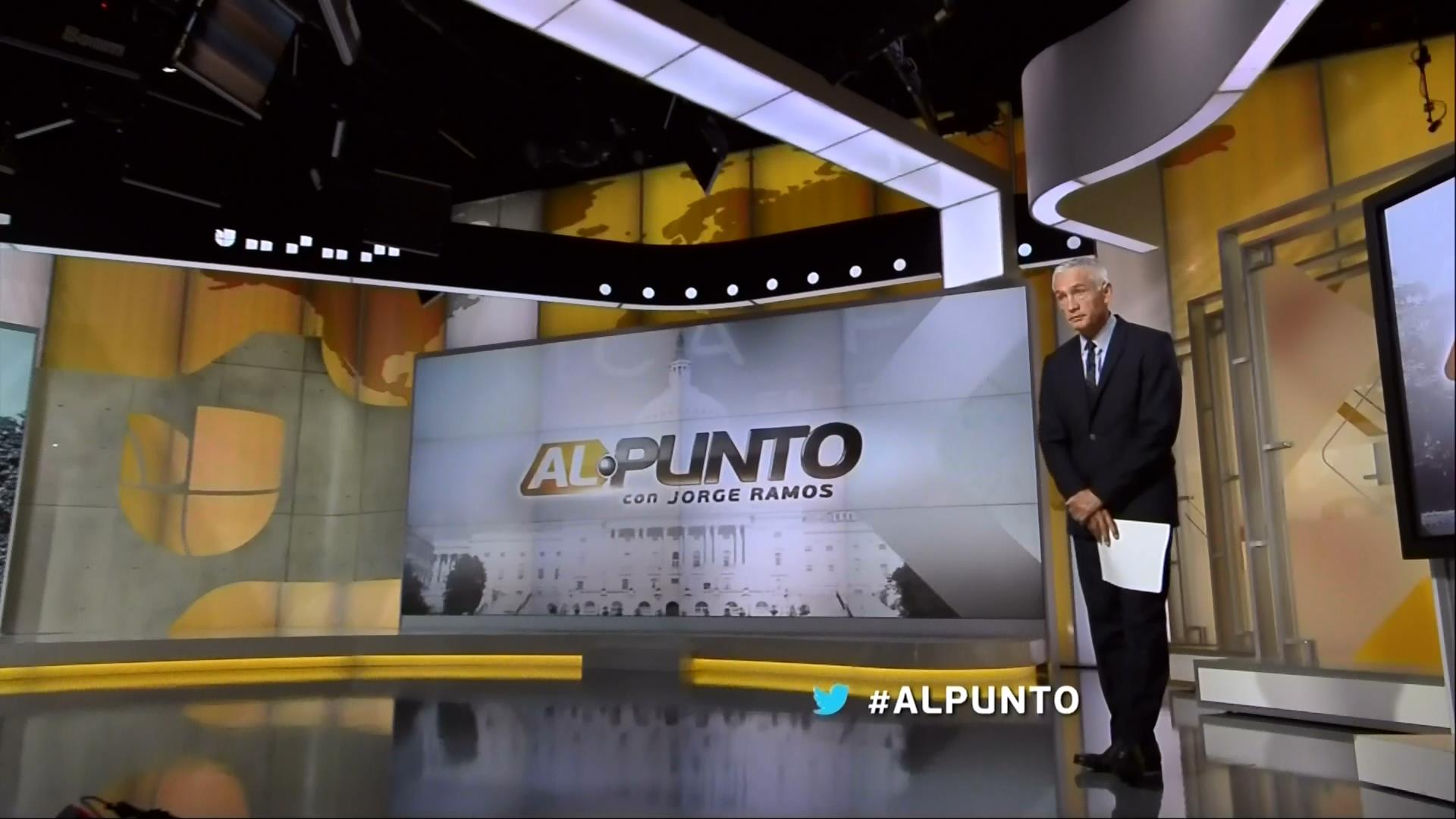 In fact, in four out of the five segments of the latest edition of the hour-long Sunday public affairs show, Ramos led guest after guest into a volley of broadsides against the GOP’s presumptive 2016 presidential nominee. At the same time, throughout the program, Ramos’ line of questioning failed to devote even a single second to Hillary Clinton’s own set of problems and scandals.

With Donald Trump having all but secured the required amount of delegates for the Republican nomination, it was probably only a matter of time before Ramos would turn his full fury against the candidate, which is just what he did by constantly goading his guests into anti-Trump tirades.

JORGE RAMOS, HOST, AL PUNTO: In this presidential campaign, with Donald Trump attacking so many immigrants, is it necessary for you to come out and defend immigrants?

JORGE RAMOS, HOST, AL PUNTO: Last June, Donald Trump said that Mexican immigrants, that is you, and me, and many others, that we're criminals, drug smugglers and rapists, have you ever felt discriminated in the U.S?

JORGE RAMOS, HOST, AL PUNTO: I only need to say Donald Trump and your reaction is...

With his daughter working for Hillary Clinton and his top boss at Univision squarely in the Clinton camp since 1992, it’s probably not surprising that Ramos has yet to dedicate anywhere near the same level of attention and scrutiny to Trump’s scandal-ridden Democrat counterpart, Hillary Clinton.

So far, Ramos has shown himself utterly unwilling to back away from his twisted narrative that anyone who thinks the laws of the land should be respected and enforced, and our borders protected, is “anti-immigrant.”

What Ramos doesn’t seem to know is that he is actually likely helping the very person he loves to rail against. Or maybe it’s just because it’s good for business.

Below is the transcript of the cited relevant portions of Univision’s Al Punto broadcast on May 8:

JORGE RAMOS, HOST, AL PUNTO: This is part of the first act of your play “Hamilton”, and it’s the phrase I’d like to highlight here, you say: “Immigrants, we do the work”. In this presidential campaign, with Donald Trump attacking so many immigrants, is it necessary for you to come out and defend immigrants?

LIN-MANUEL MIRANDA, ACTOR AND PLAYWRIGHT: Well, in truth, I’ve been writing this play for almost seven years, and the history of immigrants in the United States is of more than 200 years. And for me one of the things that was my inspiration to write “Hamilton” was the notion that one of our founding fathers was a Caribbean immigrant. He [Alexander Hamilton] was born in Nevis, grew up in St. Croix, came to the United States when they were colonies and helped create our nation. Since then, the story of the immigrant is part of the history of the United States. We’ve always come from other countries to improve our lives and to do the hard work to create opportunities for us and for our children, and it’s all falling in the same year that Trump is presenting himself to [run for] office is a nice coincidence to remind Americans that immigrants have always been a part of our history.

JORGE RAMOS, HOST, AL PUNTO: But, what’s been going on in the United States, Lin-Manuel? I have been in this country for 33 years and I’ve never seen a campaign, an environment, so anti-immigrant like the one we’re seeing now. I thought that in this moment you and I would be talking about, for example, comprehensive immigration reform – but no, we have to talk about someone who wants to deport 11 million undocumented immigrants. What failed or is failing in this country?

LIN-MANUEL MIRANDA, ACTOR AND PLAYWRIGHT: Well, what you’re seeing is a thing that has always happened in our political process that – and I don’t know if it’s as harsh as it is today, but immigrants are always the enemy in an election cycle. It happened in ’96 with Pat Buchanan. It happened with the Irish when they were new immigrants at the end of the 19th century. So there will always be people that use… use fear and capitalize on it to get votes, and we’re seeing it today too.

JORGE RAMOS, HOST, AL PUNTO: Alfredo, last June, Donald Trump said that Mexican immigrants, that’s saying you, me, and many others, are criminals, drug smugglers and rapists, have you ever felt discriminated in the U.S?

DR. ALFREDO QUIÑONES, NEUROSURGEON: Yes, sometimes we feel discriminated against because we have an accent. People think that because we have an accent, we think with an accent. And yes, it hurts my heart to hear those comments. I realize, for example, right now, in the rallies, in these functions where politicians are talking about how the border – the fence between the US and Mexico is gonna get bigger, and they’re telling for Mexicans to pay for it, as if we were demons, as if we were all criminals, and logically, it’s like a dagger driven into one’s heart…

DR. ALFREDO QUIÑONES, NEUROSURGEON: My answer is simple, to simply let people know that there’s people like us, like you and me, that are working hard day to day, not just taking care of patients, not just doing science, but also being role models, models for young people to follow. The way I reply is simple: writing more articles, doing more research, try to find the cure for cancer, try to better my care for patients.

JORGE RAMOS, HOST, AL PUNTO: Do you think that now – you have become an activist too? Have you lost your fear, Diane?

DIANE GUERRERO, ACTRESS: Yes, but I am also very motivated, and I say it like that because every day I would wake up like that. I would wake up and say, “I am not okay with the system we have, I am not okay with hearing about families being separated, it’s not okay that my family is still in Colombia and I can’t do anything about it.” I used to feel that way then, so when I started to speak out about this and get more involved in the movement for comprehensive immigration reform, something started to change in me, I felt better. Now I can live more calmly, and the fear goes away a little. And being an activist, well, has been a dream of mine, and well, I don’t know yet if I am one, but I am on that path and want to keep going.

JORGE RAMOS, HOST, AL PUNTO: I only say “Donald Trump” and your reaction is…

DIANE GUERRERO, ACTRESS: Well, sometimes I wanna laugh, because his words seem ridiculous to me, how he’s inspiring the party [Republican]. It looks like – it doesn’t seem that it’s something to take seriously, but that’s what I thought before. Now, well, obviously he will be the Republican candidate, and that’s what we’re seeing. I don’t know, he’s a person that divides people. I feel that we need a President that will unite the country, that will achieve solutions, and not just, you know, boring things that we’ve already heard, that we’ve been hearing for years and years. What he says is nothing new, of dividing us, spewing hate and exclusion, and to build a wall. This is – I mean, I don’t think it’s very modern.