Something odd happened in Telemundo’s coverage of Donald Trump’s debut major foreign policy speech: they kept wondering where his proposal for a U.S.-Mexico border wall went.

The Spanish-language television sister network of NBC seems to think the Republican presidential frontrunner can’t have a foreign policy speech without specifically mentioning that signature initiative of his.

The complaint led the network’s evening news teaser, and was echoed by reporter Liliana Henau in the report.

JOSE DIAZ-BALART, ANCHOR, TELEMUNDO: Looking to reinforce his image as presidential, Donald Trump offers a speech about his foreign policy plans but doesn’t mention the wall with Mexico.

Gordon said he believed Trump would be the best to “rebuild the country” and reduce its weaknesses. Chase echoed the Republican frontrunner’s emphasis on putting America first, and that America’s allies should understand that they, too, have a responsibility to contribute towards their own defense. 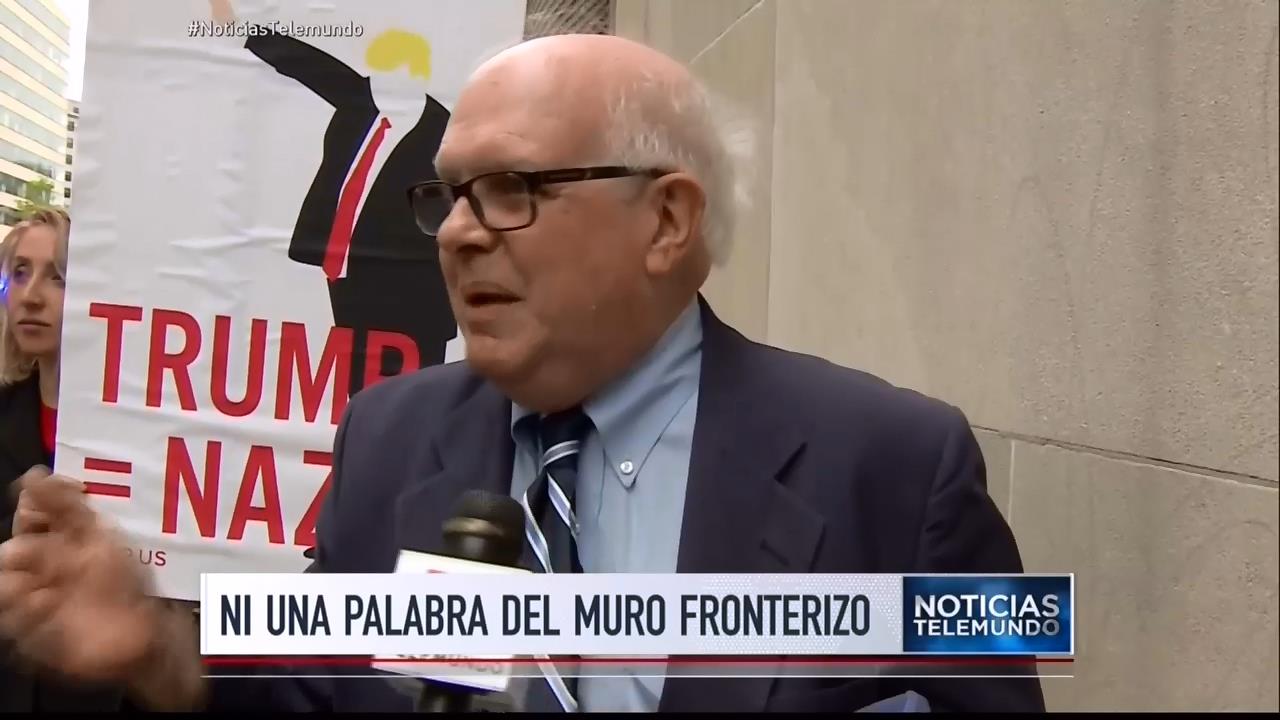 Trump detractor Peter Schechter of the Atlantic Council also weighed in, along with longtime Lyndon Larouche associate and 9-11 conspiracy theorist Webster Tarpley, who of all people condemned the GOP as “a party of crazy people.” This is also the same man who in 2012 denounced Mitt Romney for leading a “Mormon takeover of America.”

Though Trump did not directly mention the border wall proposal in his speech, there was an implicit reference to it when he declared “Many Americans must wonder why our politicians seem more interested in defending the borders of foreign countries than their own. Americans must know that we are putting the American people first again. On trade, on immigration, on foreign policy – the jobs, incomes and security of the American worker will always be my first priority.”

Below is the transcript of the cited report from the Noticiero Telemundo broadcast aired on April 27:

JOSE DIAZ-BALART, ANCHOR, TELEMUNDO: After sweeping the primaries on Tuesday, Donald Trump tries to dispel doubts about his ability to govern the country, today the candidate gave a speech in Washington on foreign policy, one of the issues that he has been criticized on the most. Liliana Henau has the details.

LILIANA HENAU, REPORTER, TELEMUNDO: In an unusual foreign policy speech by who is already considered the likely nominee of his party, he [Trump] directed his attacks against President Barack Obama and Democratic candidate Hillary Clinton.

LILIANA HENAU, REPORTER, TELEMUNDO: [Translating Trump’s statements] "Our foreign policy is a disaster, there is no vision, purpose, or strategy," Trump said. "And believe me I am the only one who can fix it." He said his priority will be the security of the United States. J.D Gordon, ex-military, listened to the speech and was satisfied.

J.D GORDON, EXVOCERO PENTAGON: I think President Trump would be a great hero in this country, and I believe he can rebuild this country. I think we are very weak now.

JO-ANN CHASE, PARTISAN TRUMP: He is talking about putting America number one. He is speaking to respect and deal with allies that understand that they too have responsibility.

PETER SCHECTER, POLITICAL ANALYST: I heard very little on clear and concise plans. I heard a lot of power projection, much bargaining power, and a lot of military growth.

LILIANA HENAU, REPORTER, TELEMUNDO: The magnate did not talk about illegal immigration, or the famous wall that he ensures will be built on the southern border, he said, funded by Mexico.

LILIANA HENAU, REPORTER, TELEMUNDO: And just outside the Mayflower Hotel, protesters against the candidate they called racist, sexist and fascist.

WEBSTER TARPLEY, PROTESTER: He will probably be the candidate of the Republican Party, which is a party of crazy people.

LILIANA HENAU, REPORTER, TELEMUNDO: According to Trump campaign advisers, this is the first of a series of speeches scheduled in the coming days in order to allay concerns of some Americans who question the ability of the Republican candidate for President.