Brian Williams Claims ‘I Was Not Trying to Mislead People’ 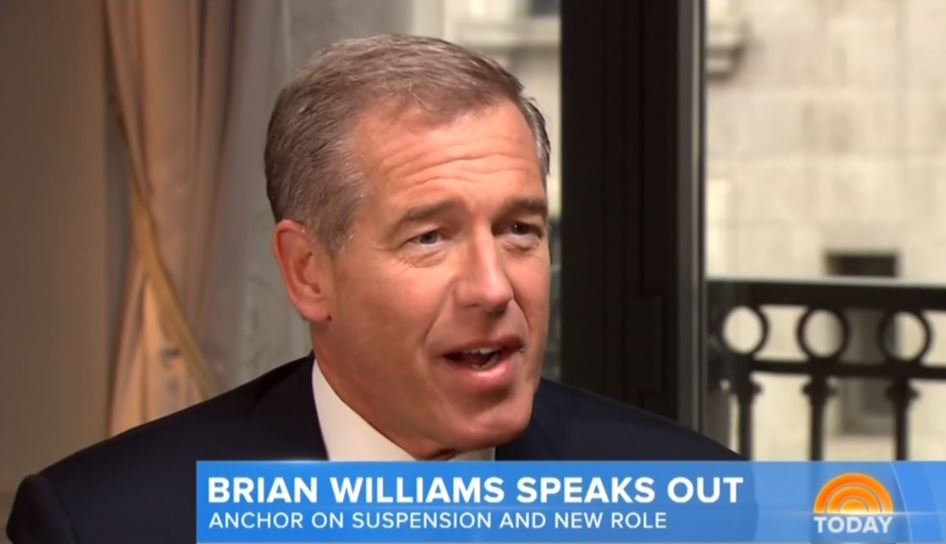 In his first interview since being suspended and removed as anchor of NBC Nightly News, Brian Williams told Today co-host Matt Lauer on Friday that he “was not trying to mislead people” when he fabricated stories about news events he covered.

Lauer asked: “...let's go back to January when you went on Nightly News and you recounted a story about a military veteran who played a role in a harrowing chopper ride you took while covering the Iraqi war....Did you know it was not true?” Williams replied: “I told the story correctly for years before I told it incorrectly. I was not trying to mislead people. That, to me, is a huge difference here.”

Lauer pushed back: “But wait a second, you say, ‘I was not trying to mislead people,’ but I need to make sure we understand each other here. Did you know when you went on Nightly News that you were telling a story that was not true?” Again, Williams denied intentional dishonesty: “No. I – it came from a bad place. It came from a sloppy choice of words. I told stories that were not true over the years, looking back. It is very clear. I never intended to. It got mixed up. It got turned around in my mind.”

Following up, Lauer observed: “I worry as you say this, Brian, that people who are going to have listened to your apology on air....are now going to hear what you’re saying now and they’re going to say he's still saying he didn't intend to mislead people, and yet, he didn't tell the truth.” Williams responded: “I see why people would say that. I understand it. This came from clearly a bad place, a bad urge inside me. This was clearly ego-driven.”

Continuing to press Williams, Lauer wondered: “Did you give thought at the time to going on the air and saying, ‘I lied’?” Williams argued: “I know why people would see it that way. It's not what happened.”

Lauer began the interview with a sympathetic softball: “What have these past five months been like for you?” Williams bemoaned: “It has been torture. Looking back, it has been absolutely necessary. I have discovered a lot of things. I have been listening to and watching the – what amount to the black box recordings from my career.”

Later in the exchange, Lauer fretted over “people [who] are not going to let this just rest” and asked: “And so if there are other circumstances and other situations where you didn't tell the whole truth, would you like to take this opportunity now to correct the record on those?” Williams asserted: “I would like to take this opportunity to say that what has happened in the past has been identified and torn apart by me and has been fixed, has been dealt with. And going forward, there are going to be different rules of the road.”

In the second part of the interview aired in the 8 a.m. ET hour, Lauer posed: “And to that percentage of viewers out here who says, ‘He doesn't deserve my trust,’ what do you say to them?” Williams pleaded: “I’ll work every day for it. I would go door to door if I could. I’ll go person by person. All I can tell people is hold me to account, judge me by as harsh a standard as you wish. Many already have. That's fair.”

In another softball to his colleague, Lauer noted: “You’ve been suspended and now you will no longer be the anchor of NBC Nightly News. Is it hard to get your head around that?” Williams admitted: “Was it my first choice? No. Obviously I wanted to return to my old job. I thought we had had a great ten-year run. We were on top for most of that time. I pushed back at first. Enough time has passed, I accept the decision.”

Lauer wrapped up the sit-down by urging Williams to write his own comeback headline: “You're a good writer. So write me the headline and then write me the final line of the story.”

Lauer added: “And the last line of that story?” Williams joked: “Hopefully, ‘Williams was 110 years old and lived in Sarasota, Florida.’”

After the taped segment, Lauer concluded: “I do believe in second chances.” Weatherman Al Roker chimed in: “I do think most of America does and wants him to succeed.”