During the five minutes of coverage that Thursday's NBC Today provided on President Obama reopening diplomatic relations with Cuba, only twenty-three seconds was devoted to critics of the controversial move. In addition, the only opponent featured was Republican Senator Marco Rubio, despite Democratic Senator Robert Menendez equally condemning the presidential action.

At the top of the show, co-host Savannah Guthrie proclaimed: "New era. The President's surprise move to restore U.S. relations with Cuba after fifty years of hostility. A history-making decision being praised by some, criticized by others." Such a tease would suggest equal time to both sides on the issue, but a sixteen-second soundbite of Rubio was relegated to the end of a report from correspondent Andrea Mitchell, who portrayed the Florida lawmaker as having "led the Republican opposition to the historic policy shift."

During a news brief at the top of the 8 a.m. ET hour, anchor Natalie Morales provided another seven seconds to Rubio's opposition.

The coverage ignored critics beyond the GOP – including Menendez and the editorial board of The Washington Post – blasting the decision.

Immediately following Mitchell's lopsided report, co-host Matt Lauer turned to correspondent Mark Potter in Havana, who proclaimed that Cubans were "elated" by the development and touted: "In Cuba, the announcements in Washington and Havana about the diplomatic openings are being celebrated as wonderful news. There is absolutely no controversy here."

ABC's Good Morning America also downplayed criticism of the policy shift, instead declaring that it "helped thaw a Cold War."

CBS This Morning was the only network morning show to mention Menendez denouncing the reopening of diplomatic relations with Cuba. However, it was also the only show to bring on prominent Obama supporter Colin Powell to defend the decision.

Here are transcripts of the two full reports on the December 18 broadcast of Today: 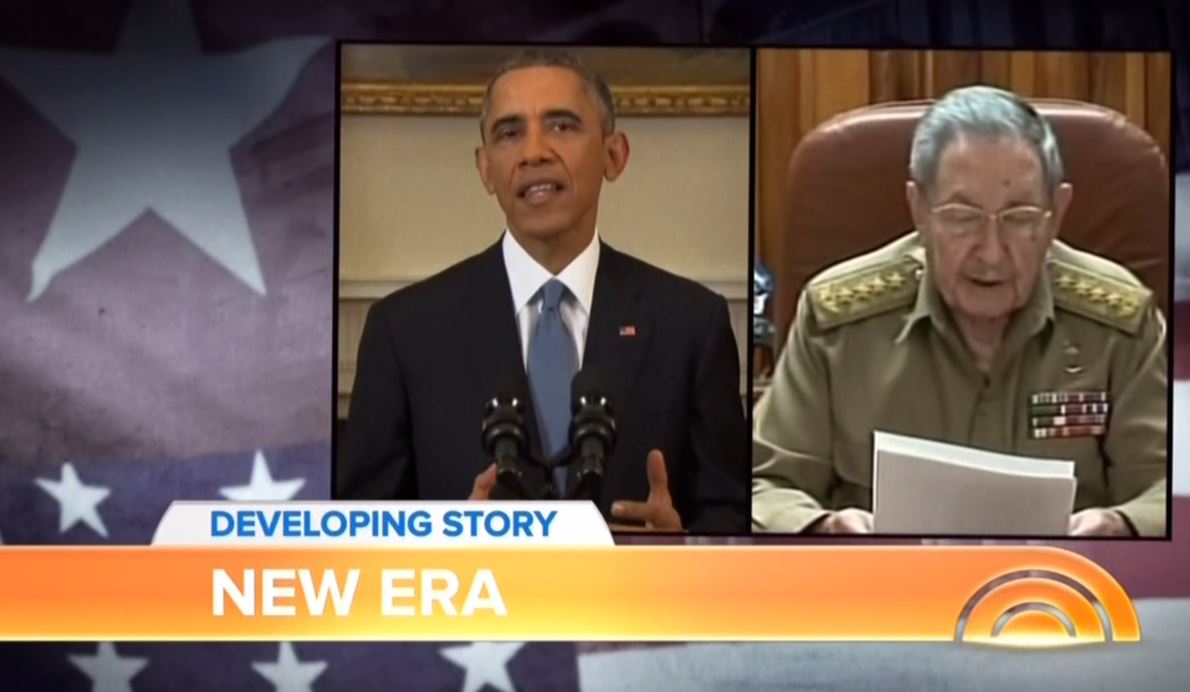 SAVANNAH GUTHRIE: New era. The President's surprise move to restore U.S. relations with Cuba after fifty years of hostility. A history-making decision being praised by some, criticized by others. We'll be live in Washington and Havana.

MATT LAUER [VERY POOR AUDIO]: We're learning more this morning about the historic prisoner swap and secret talks that are now ushering in a new era of relations between the U.S. and Cuba. Andrea Mitchell is NBC's chief foreign affairs correspondent. Andrea, good morning to you.

SAVANNAH GUTHRIE We're gonna start – we had a mic problem there. Let's go to Andrea Mitchell. Obviously huge news coming out of Cuba and a major policy shift. Andrea, do I have you in Washington?

ANDREA MITCHELL: You do, indeed, thanks to you and Matt. And no longer Cold War foes, today the United States and Cuba, Savannah, are beginning a new chapter, taking the first steps in more than a half century toward establishing diplomatic relations.

BARACK OBAMA: We will begin to normalize relations between our two countries. Through these changes, we intend to create more opportunities for the American and Cuban people. 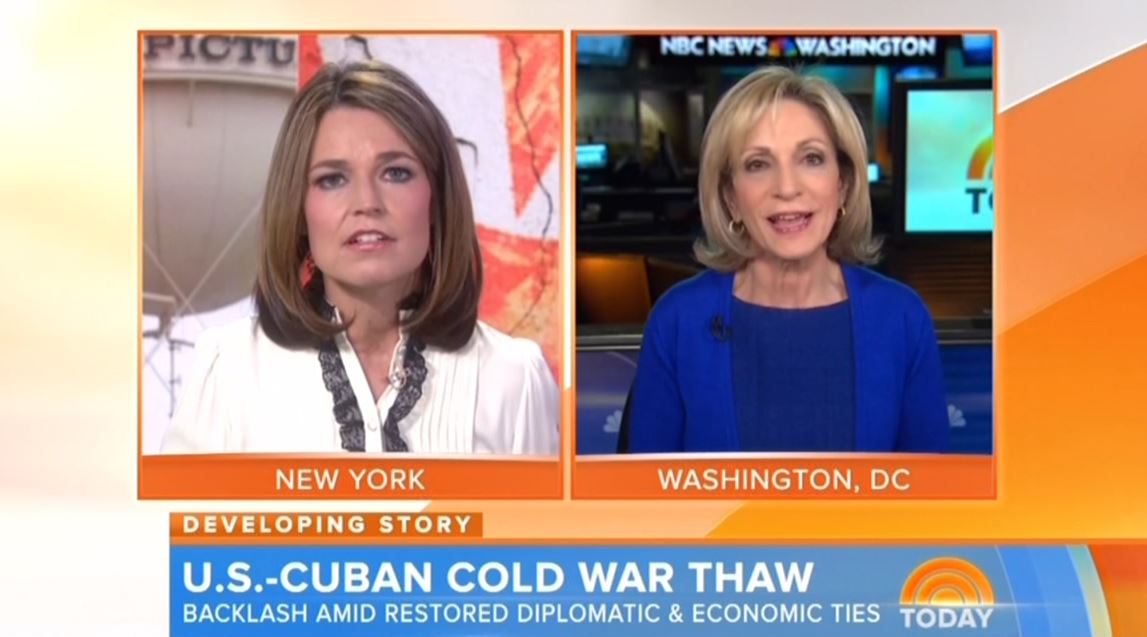 MITCHELL: Secretary of State Kerry will travel to Cuba to work on plans for a U.S. embassy and a Cuban embassy in Washington. Cuba will likely be removed from the list of terrorist states. The U.S. will permit more travel and trade, expanded banking, including the use of debit cards. Cuba promises internet access, what could be an information revolution for its people.

RAUL CASTRO: We both learned the art of co-existing in a civilized manner despite our differences.

MITCHELL: All made possible by secret negotiations, including at the Vatican, pressure from the first Latin American pope. A carefully orchestrated deal involving the return of three remaining Cuban prisoners from the U.S., greeted in Havana by Raul Castro. In exchange for Cuba's release from prison of a top-level American spy back to the U.S. and the humanitarian release of imprisoned State Department contractor Alan Gross, who cheered as he entered U.S. airspace and got a call from President Obama, before an emotional arrival at Andrews Air Force Base.

ALAN GROSS: It's great to be back, really.

MITCHELL: And with all of these people who have supported you so long.

GROSS: It's been a heck of a trip. It really did bring great comfort to me knowing that I wasn't forgotten.

MITCHELL: But on Capitol Hill, Marco Rubio, the son of Cuban-American refugees, led the Republican opposition to the historic policy shift.

SEN. MARCO RUBIO [R-FL]: This President has proven today that his foreign policy is more than just naive, it is willfully ignorant of the way the world truly works.

MATT LAUER: So how is this news being received in Cuba? NBC's Mark Potter is in Havana. Mark, I know you've made many trips to Cuba in the past. Does the mood there this morning feel different?

[ON-SCREEN HEADLINE: On the Scene in Havana; Cubans React to News of Restored Relations] 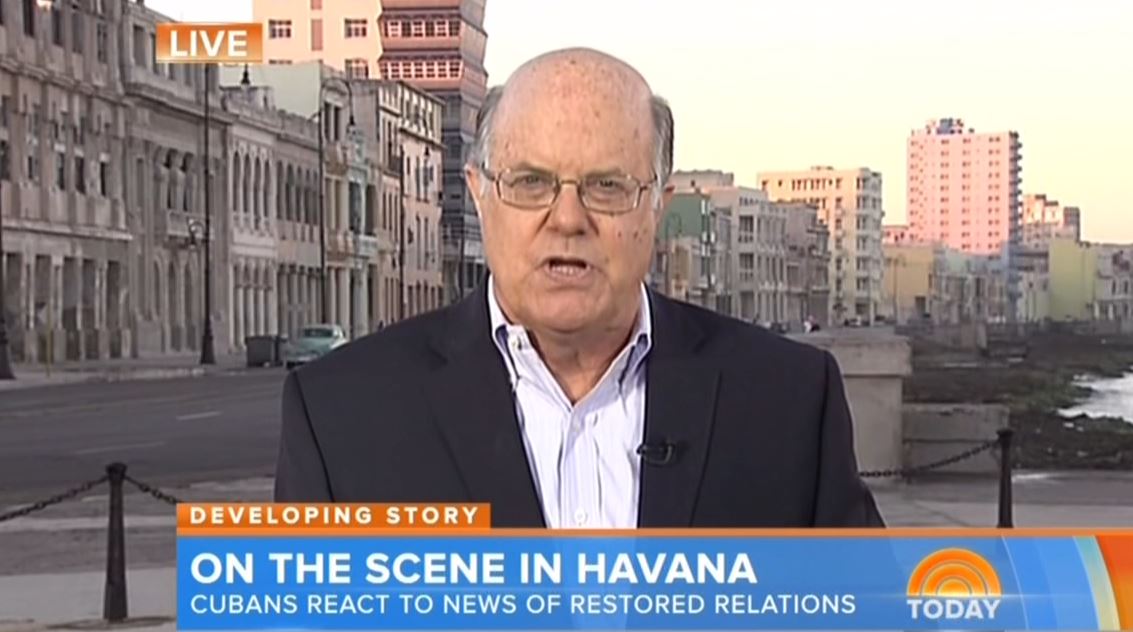 MARK POTTER: Absolutely. The people here are elated, Matt. In Cuba, the announcements in Washington and Havana about the diplomatic openings are being celebrated as wonderful news. There is absolutely no controversy here. For years the Cuban people have wanted better relations with the U.S., thinking that that could help end the trade embargo and also improve their lives economically and politically.

But the bigger celebrations here so far have been for the release of those three Cuban prisoners let loose by the U.S. on Wednesday. They plus two others released earlier are known here as the Cuban Five, they are considered national heroes, and they were seen on national television last night embracing the Cuban President Raul Castro.

As for other Cubans, many here believe that the easing of travel restrictions by the U.S., more trade missions, easier financing will bring more goods here, more opportunity, more money to an island that has long been strapped economically, Matt.

LAUER: So when you say their elated, they feel their lives are going to change dramatically in the near term?

POTTER: They think that their lives are going to change dramatically some time, they're hopeful. But I must tell you that there are many people here who are a little concerned about whether this will actually occur given the tortured relationship between the U.S. and Cuba over the years, also the up and down nature of U.S. politics. So they're watching it carefully. But there are many people here who believe that this is the best opportunity that they have had in decades to see actual and dramatic change, Matt.

LAUER: Alright, Mark Potter in Havana. Mark, thanks very much.