On Tuesday, the White House announced that President Obama would award the Presidential Medal of Freedom to former NBC Nightly News anchor and current special correspondent Tom Brokaw – among other 2014 recipients. Today news anchor Natalie Morales touted the announcement on Monday, noting: "Obama said in a statement, these citizens have made extraordinary contributions to our country and the world." 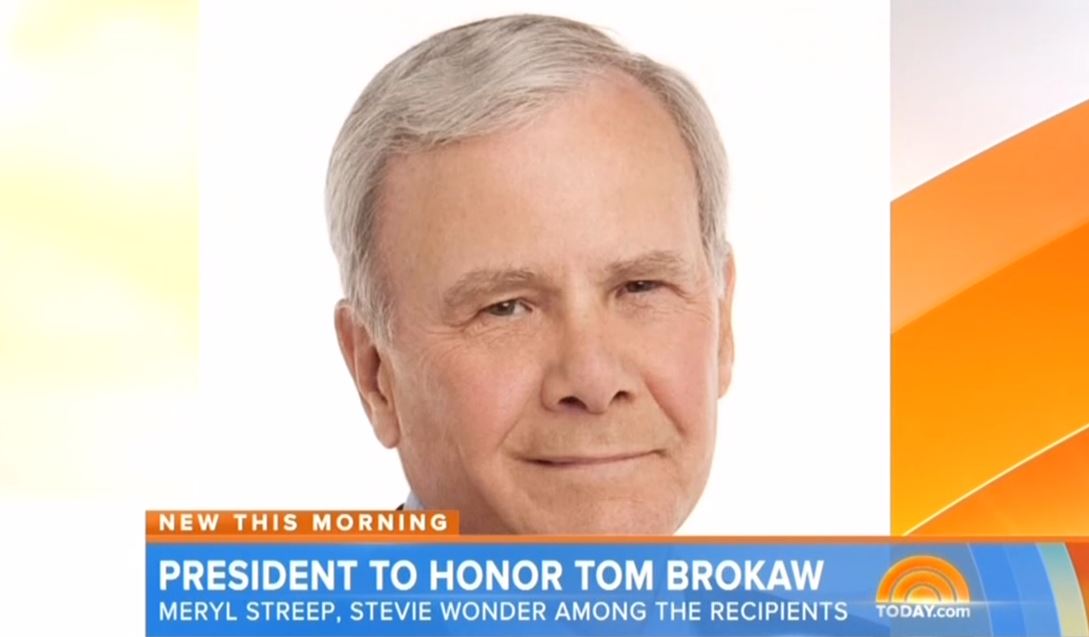 Brokaw has repeatedly taken the opportunity to boost or defend Barack Obama throughout his presidency. That made it no surprise that the commander-in-chief would want to reward such a loyal media supporter.

In fact, it would not be the first time Obama bestowed an honor on Brokaw. In 2009, the President named Brokaw to the selection panel for the White House Fellows program.

Here is a sampling of Brokaw's pro-Obama spin over the years:

You know what it reminds me of? It reminds me of the Velvet Revolution. I was in Prague when that happened. And Vaclev Havel was a generational leader and was in the square in Prague and the streets were filled with joy. And we're not overthrowing a communist regime here, obviously, but an unpopular president is leaving and people have been waiting for this moment. And there's that same sense of joyfulness and possibility even though, as in Czechoslovakia, they had enormous problems and we do as well.
– Tom Brokaw during NBC's January 20, 2009 pre-Inaugural speech coverage.

Forget High Unemployment Under Obama, Reagan Had It Too

If we can just – I've been wanting to share this on Meet the Press for some time, looking forward beyond the elections this fall about the political future of President Obama, here are some numbers that people may want to keep in mind. These are the unemployment rates in key states in 1982, well into President Reagan's first term. Look at the screen. Michigan, 16.8 percent; Alabama, 14.3; Ohio, 13.9; down through 12 and above. That went on into 1983. Did it spell the end of the Reagan presidency? Not exactly.
– Brokaw on NBC's Meet the Press, March 14, 2010.

No President 'In My Adult Lifetime' Has Faced So Many Challenges

Well in my adult lifetime. Certainly FDR did have these challenges. But in my adult lifetime and as a reporter, here you have a president who has two wars underway, is engaged in really what is a third war. The world's third largest economy, Japan, has been gravely wounded by a tsunami and an earthquake - now has a nuclear meltdown. One of the principle members of the President's national security team said to me last night, "I'm more worried about that, than I am about Libya." And then we have, here at home, a recession that we cannot completely get out of yet. And political paralysis in Washington over the budget. All of that has arrived at, at the Oval Office, at the same time. Now when presidents get elected, that's their job. Is to take on the big, the big assignments, the big challenges. But there have been few that have come as swiftly as all of these have from unexpected circumstances.
– Brokaw on Today, March 29, 2011.

By any objective analysis the Democrats have done a far better job of paying tribute to those wars the people are fighting and the cause that now everyone has to get involved in which is to find jobs for them once they come home....Barack Obama has been a commander-in-chief and he reminded the audience of that tonight. We heard almost nothing from Mitt Romney or Paul Ryan last week on wars and foreign policy. The President made it clear tonight that this is the party that will be the friends of the veterans who are still fighting and are coming home.
– Brokaw during NBC live coverage of the Democratic National Convention, September 7, 2012.

My guess is that the big theme for him in the second term, Matt [Lauer], is going to be big ideas that unite the country, not the small ideas that have divided us for the past several of years.
– Brokaw on NBC's Today, the morning of Barack Obama's second inauguration, January 21, 2013.

Obama's Not Nixon for Trying to Prosecute Journalists, Media Just Has 'Glass Jaw'

My friend Jim Goodale says they are worse than the Nixon administration. I don't buy that....I think that the press always has to be careful about having a glass jaw, and going down with the first punch and screaming First Amendment rights. Many of the same reporters who are tough on the gun lobby when it comes to Second Amendment rights, run behind the shield of the First Amendment, without doing it in a way that is qualitatively analytical, and not just a knee-jerk reaction.
– Brokaw reacting to the Obama administration trying to prosecute journalists, in a May 2013 interview with TVNewser.