On Friday's NBC Today, co-host Matt Lauer brought on political director and Meet the Press moderator Chuck Todd to discuss the latest NBC News/Marist poll on a major American institution being rocked by scandal. It wasn't the Obama administration getting the bad press, it was the National Football League.

That's right, NBC News conducted an entire poll just on the controversies surrounding the NFL and then put its chief political expert on air to analyze the findings. Not a single mention of President Obama's sinking poll numbers was mentioned during the Today segment, not even any reference to politics. [Listen to the audio]

The next morning on the September 10 Today, Lauer gave a mere 23 seconds to the poll.

If Obama was the commissioner of the NFL, the media would be all over him.

Here is a full transcript of the September 19 segment on Today:

MATT LAUER: Another night, another protest. A women's group flies a "Goodel Must Go" [sic] banner over the Falcon's game in the latest call for the embattled NFL commissioner to step down. This as a new NBC poll reveals how Americans feel about the scandal. And you may be surprised by the results. 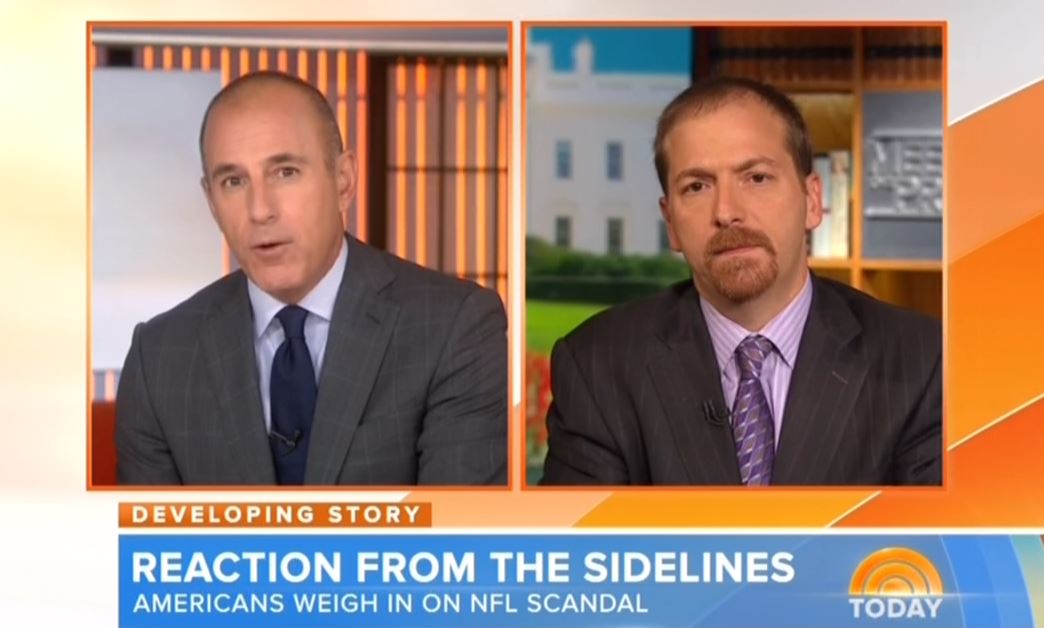 LAUER: Week three of the NFL season has begun with yet another protest at one of the league's biggest games. The league, of course, remains mired in crisis surrounding its reaction to the off-the-field behavior of some players. Meantime, a new NBC News poll shows that more than half of Americans aren't satisfied with how the NFL has handled the domestic violence scandal. Chuck Todd's gonna have more on the results from that poll in a minute.

LAUER: Chuck Todd is NBC's political director and moderator of Meet the Press. Chuck, good morning to you.

[ON-SCREEN HEADLINE: Reaction From the Sidelines; Americans Weigh In On NFL Scandal]

LAUER: I wanna get to these specific poll numbers in a second, but people have very strong feelings about what they're seeing unfold with the NFL. And yet, they don't seem to be letting those feelings create a wide-scale indictment of the game itself.

TODD: No, that's what we're seeing here. It was a whopping 85% of those we surveyed said they're not gonna change how much football they watch, that it's not gonna impact what they watch. In fact, only 11% overall said what's been happening in the game and how the NFL has handled it makes them want to watch less football. So if you thought that fans would be providing the pressure on the NFL to do something more, this poll indicates that's not the case, Matt. 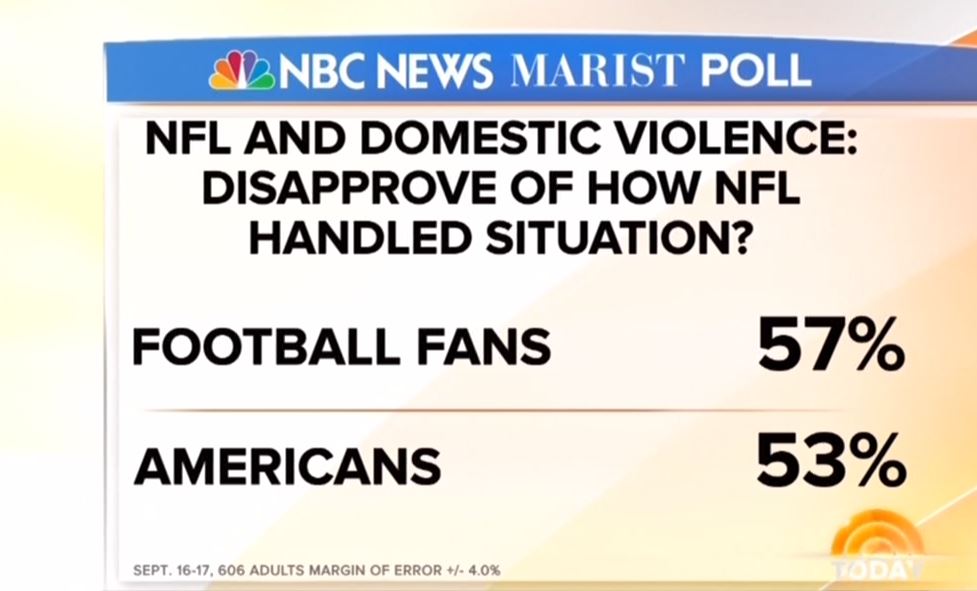 TODD: They are. And that's what is coming in here. And so, clearly, football fans wish they would handle it better, all that stuff. It's not impacting what they say about the game. But when it comes to Roger Goodell, Matt, at this point, they don't think he should lose his job over it. So even though they disapprove of how the league's handling it, which means they disapprove of how Roger Goodell's done the situation. 46% of football fans don't believe he should lose his job. Only 32% say he should. So he's got room to move. And it sort of explains, Matt, why we're watching it and wondering, "Why isn't the NFL acting sooner? Don't they realize they have this PR crisis?" Well, you know what? They're probably doing some of their own surveying of fans, too, and they're seeing the same numbers.

LAUER: Alright, and just an offshoot to this story. Obviously the Adrian Peterson situation, the Minnesota Vikings running back, charged now with reckless or negligent injury to a child. That prompted the question in our poll about corporal punishment, and the results there, Chuck, I think, are going to surprise a lot of people.

TODD: I think they are. I mean, overall, it shouldn't be surprising that a large majority, 60% , believe parents shouldn't use belts, paddles or switches to punish their child. But there is some cultural differences in our country. While 60% overall are against that, 51% in the south – Adrian Peterson, a Texan – 51% of the south say they believe that it is acceptable to use a switch, a belt to punish a child. So, the cultural differences there, which is something that some players who have backed up Adrian Peterson in this situation have said, are – do show up in this poll.

TODD: You got it.

LAUER: And just a reminder to our audience to catch Meet the Press this Sunday morning on NBC.