NBC and CBS Gush Over Hillary In Iowa: 'Can She Do It This Time?'

After fretting on Sunday's Meet the Press that Hillary Clinton may not be liberal enough for 2016 Democratic caucus-goers in Iowa, on Monday's NBC Today, correspondent Andrea Mitchell eagerly touted the Clinton campaign machine: "This time, Clinton organizers say they've learned their lesson, busing in volunteers from all over the country."

A clip played of Mitchell shouting a question to the former secretary of state: "Does it feel great to be back out here?" Clinton replied: "It's great. It was a great day. Couldn't have been better." To former President Bill Clinton, Mitchell enthused: "If she wants to, can she do it this time?" He dodged the question, remarking: "I have nothing to say. It's not my decision." Mitchell concluded: "I think I know which way you would vote." [Listen to the audio]

Monday's CBS This Morning treated the Clintons in a similar fawning manner. Like Mitchell, correspondent Nancy Cordes gushed over the unofficial campaign stop: "At this year's event everyone treated her like a candidate from the supporters on the rope line to the dozens of volunteers who flew in to hand out buttons and signs in this key caucus state."

Cordes lobbed this softball to Hillary Clinton: "Does this wet your appetite for another campaign?"

After the report, co-host Norah O'Donnell acknowledged that the former first couple "didn't talk to the press" but was thrilled by their barbeque skills: "The Clintons were both there but they were flipping steak, it was a steak fry. But Bill Clinton, true to himself, was flipping a veggie burger as he remains a vegan, or partial vegan."

Perhaps Mitchell and Cordes should have shouted questions to Bill Clinton about his nasty attack on the GOP during the event. Clinton proclaimed: "They're trying to get you to check your brain at the door, start foaming at the mouth. The last thing they want you to do is think."

ABC's Good Morning America on Monday only provided a single 15-second news brief on the Clintons' Iowa visit. However on Sunday's This Week, ABC joined NBC in worrying that Hillary was not far enough to left for Democrats.

Here are full transcripts of the September 15 segments on Today and This Morning:

MATT LAUER: Let's turn to politics now, Hillary Clinton returned to Iowa Sunday for the first time since the 2008 presidential campaign. She brought her husband along, so a lot of people asking the question, is she going to make another White House bid? NBC's Andrea Mitchell was there and joins us now in the studio. Hi, Andrea.

[ON-SCREEN HEADLINE: Clintons Head Back to Iowa; Visit Site of Key 2008 Loss Ahead of Possible Run] 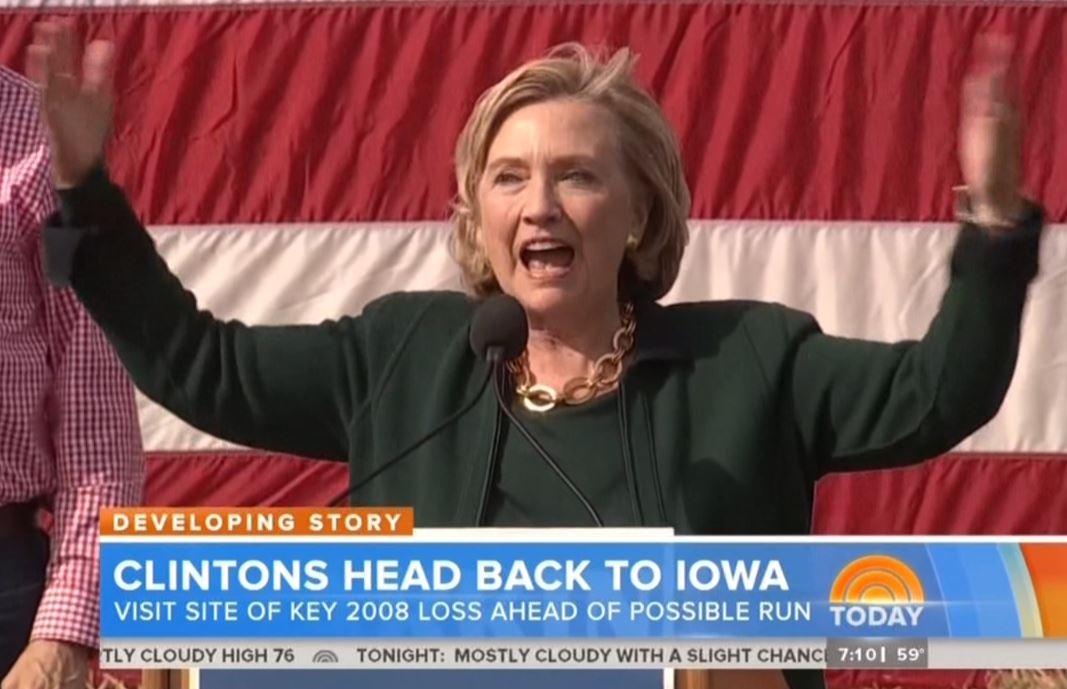 MITCHELL: Returning to the state that many say dashed her White House hopes in 2008, Hillary Clinton came back for an Iowa tradition, the Harkin Steak Fry, adding fuel to speculation that she will run again.

CLINTON: It is true, I am thinking about it. [Cheers and applause] But – but for today, that is not why I'm here. I'm here for the steak.

CLINTON: And let me tell you, he sure loves Iowa.

MITCHELL: But she didn't say she loves Iowa, describing her third place finish in the state's caucuses as "excruciating" in her new book. Clinton needs to prove she can run a different kind of campaign say former Obama supporters like state senator Janet Peterson.

MITCHELL: Rather than top-down?

MITCHELL: This time, Clinton organizers say they've learned their lesson, busing in volunteers from all over the country. Where are you from?

UNIDENTIFIED MAN B: Out of Washington, D.C.

MITCHELL: Clinton knows coming here will make it harder to turn back. [To Hillary Clinton] Does it feel great to be back out here?

CLINTON: It's great. It was a great day. Couldn't have been better.

MITCHELL: Her husband is still not making predictions. [To Bill Clinton] If she wants to, can she do it this time?

BILL CLINTON: I have nothing to say. It's not my decision.

MITCHELL: I think I know which way you would vote.

CLINTON: No, you don't. I don't know yet know which way I would vote.

HODA KOTB [OFF CAMERA]: What?

MITCHELL: So they say. Still, Clinton is not expected to make it official until after the new year, knowing all too well the political risks of being an early front-runner. Remember last time, right, guys?

LAUER: Yeah, that doesn't work out well for a lot of people. Andrea, nice to see you.

MITCHELL: Matt, nice to see you. 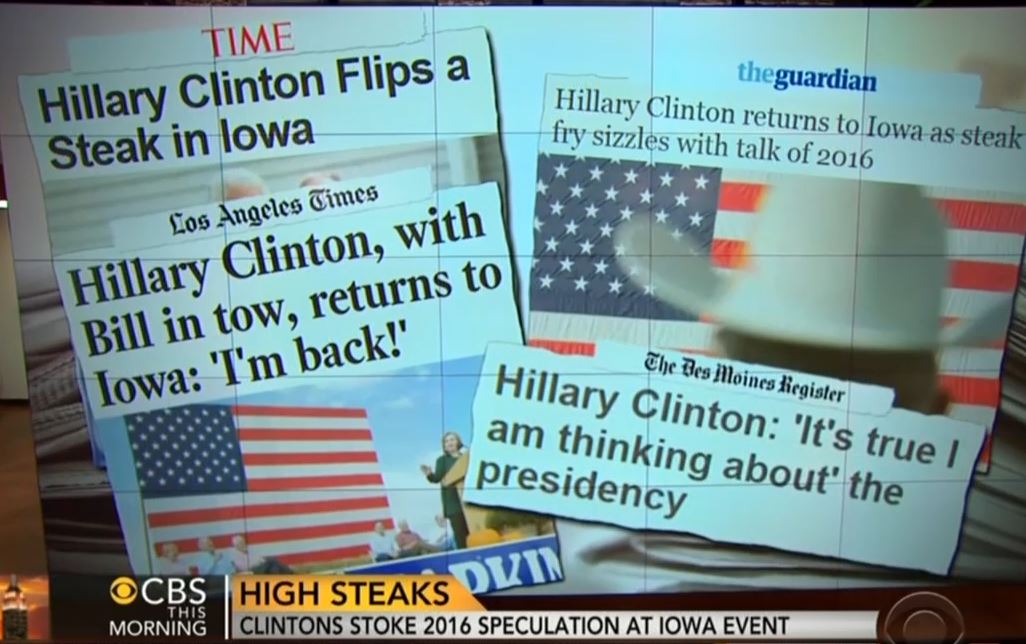 CHARLIE ROSE: Hillary Clinton's return to Iowa was in the headlines this morning. The former Secretary of State and her husband attended a major Democratic gathering and of course people there wanted to know one thing. Is she running in 2016? Nancy Cordes was there for Sunday's event. She joins us from Des Moines, the state capitol. Nancy, good morning.

NANCY CORDES: Good morning. And it's not just that Hillary Clinton came here to Iowa with those all-important first in the nation caucuses. It's that this event, the Harkin Steak Fry, has a long tradition of launching Democratic presidential campaigns.

CORDES: A cheerful but coy Hillary Clinton took center stage at a jam-packed event that had all the trappings of a campaign stop. 10,000 Iowans and 200 journalists all tried to divine whether her starring role here means she’s running for president.

CLINTON: It is true.  I am thinking about it. But for today, that is not why I'm here. I'm here for the steak.

CORDES: The last time she came for the steak was in 2007 when she was running.

CORDES: Her top five Democratic opponents were there too, including then-Senator Barack Obama. At this year's event everyone treated her like a candidate from the supporters on the rope line to the dozens of volunteers who flew in to hand out buttons and signs in this key caucus state. Does this wet your appetite for another campaign?

CORDES: Iowa was supposed to be the state that cemented Clinton's front-runner status in 2008. Instead she came in a surprise third and her campaign fully never recovered. In her book she called that loss excruciating which might help explain why she hasn't been back to Iowa until now.

CLINTON: It's really great to be back. Let's not let another seven years go by. Thank you all very much.

CORDES: Clinton is not the only potential candidate who is here courting Iowans 16 months before the caucuses. Vice President Joe Biden who is also mulling a run will be in Iowa later this week. And guess what, Norah and Charlie, he headlined the Harkin Steak Fry last year.

ROSE: It's clear she's paying a lot more attention to Iowa this time than in 2008.

O'DONNELL: Absolutely. I mean it's extraordinary to think it's been seven years since she's been in Iowa.

O'DONNELL: And she'll be back.

ROSE: And lots of Republicans.

O'DONNELL: They didn't talk to the press. The Clintons were both there but they were flipping steak, it was a steak fry. But Bill Clinton, true to himself, was flipping a veggie burger as he remains a vegan, or partial vegan.