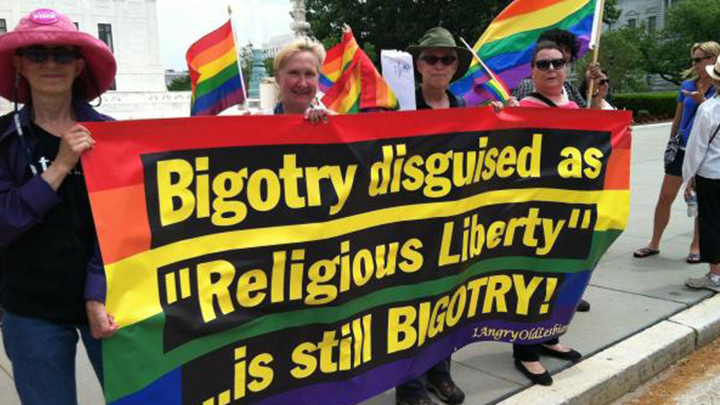 County clerks across the country are resigning after the June 26 Supreme Court decision that legalized same-sex marriage.

Just a few days after the monumental ruling, an entire county clerk office in Tennessee resigned. Decatur County Clerk Gwen Pope and both of her deputy assistants, Sharon Bell and Mickey Butler, resigned, saying the order clashed with their religious beliefs.  All three were long-time employees of the clerk’s office. Pope told The Jackson Sun they didn’t want to make the news.

Though the group has no back-up plan, Pope added, “I honestly believe God will take care of us.”

But they weren’t the only ones.

The Monday following the SCOTUS ruling, a 24-year-veteran of an office in Little Rock, Arkansas, resigned. Cleburne County Clerk Dana Guffey told her superiors that it would go against her “moral conviction” to marry same-sex couples.  She elaborated to CBS News that she “didn’t hate anybody” and it “wasn’t a decision she made lightly.”

In Grenada, Mississippi, County Clerk Linda Barnette made the same difficult decision to leave her job or face the consequences. Barnette, like Guffey, had also worked at the same office for more than 24 years.

She wrote in her letter of resignation, “I choose to obey God rather than man.” The New York Daily News’ Nicole Hensley bashed Barnette’s decision, saying, “Most clerks who objected to the Court’s ruling grudgingly complied or simply delegated the responsibility to staffers.” Hensley further complained, “she didn’t have to do it this way” but “evidently” Guffey “wanted to make a statement.”

Though the media may not understand why clerks are resigning, it continues to happen across the country. The most recent case happened in Texas. AP reported that Rusk County Clerk Joyce Lewis-Kugle resigned July 9 after explaining that she “could not in good conscience issue marriage licenses to same couples.”

Even more clerk offices have attempted to send same-sex couples to other offices rather than issue licenses themselves. The Christian Examiner reported that cases of clerks refusing to comply have happened in Hood County, Texas and Rowan County, Kentucky. Alabama Chief Justice Roy Moore issued an order saying that clerks could refuse same-sex marriage licenses for 25 days under state law, which still recognizes marriage as between a man and a woman.