In the latest example of “WTH?!” feminism, one liberal blog has taken a stab at conjoining one of your favorite childhood memories with militant abortion activism.

The fate of a young woman facing an unintended pregnancy is in your hands. What will you do? http://t.co/HJKaFyx4SP pic.twitter.com/LWFdkH8MM1

This is Fusion has come up with an interactive “Choose your own adventure” game about, of all things, getting an abortion. You remember, those stories where you choose at the end of each chapter, what should happen next?

Finally, feminists have found a way to make talking about abortion, fun! After all, they’ve already made an “abortion comedy,” why not make it a game as well?

Of course, the goal of the game is to show you how hard and awful it is to live in certain states, such as South Dakota, because of abortion regulations there.

Called, “Choose your choice; Fertile Ground: An interactive journey through an unintended pregnancy” the story starts by asking the reader to, “Imagine you’ve traded lives with a young woman in South Dakota, on the cusp of an important decision. Her fate is in your hands.”

As you move through the game, the decision to keep the baby proves to be the absolute worst decision you could make. You end up poor and constantly ill, with no support from the father or your family. Oh, and your baby was born premature with medical problems too.

But trying to get an abortion isn’t easy either. Of course, the only remaining local Planned Parenthood just closed because of those super-strict abortion laws just passed in your state; so now you have to go to the pharmacy to do it yourself. You face judgement from the “grandfatherly type” pharmacist who lies and tells you they don’t have any Plan B in stock. Finally you pay the exorbitant price of $49.99 at another pharmacy to end that growing life in you and phew, dodged that bullet!

The “game” was praised by Jill Filipovic, Senior political editor of Cosmopolitan Magazine as “so incredible” “innovative” and “creative.” 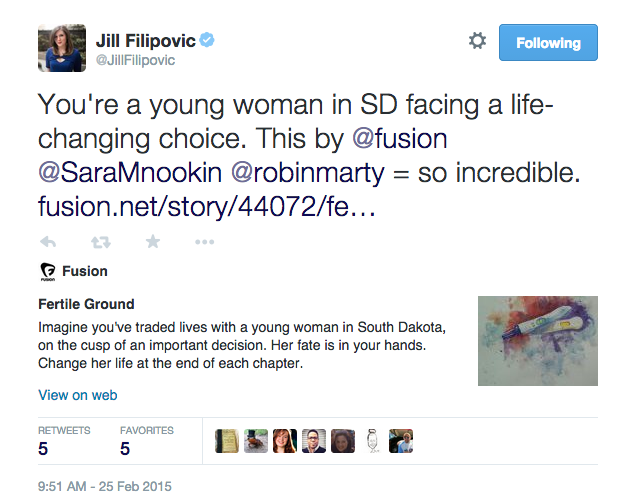 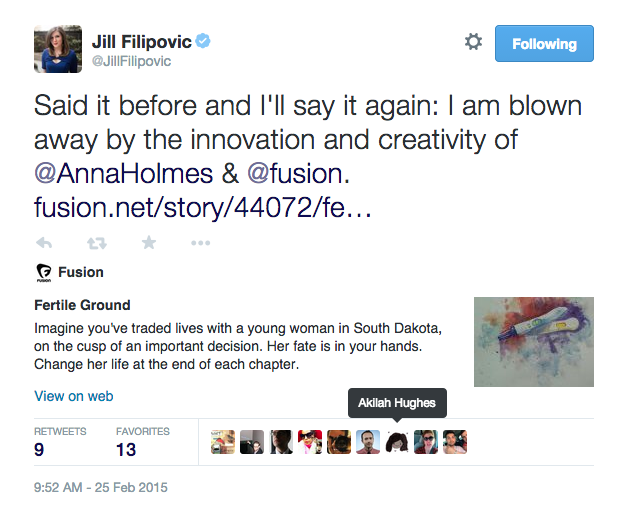 Katha Pollitt, who recently wrote a pro-choice book called "Pro" which was hyped by the liberal and feminist media, tweeted it out as “brilliant.”

But it wasn’t just feminist media showing love. Isaac Lee, President of news for Univision, and Jose Zamora, the strategic communication manager for Univision showed they agreed with Filipovic by retweeting her sentiments. Jamil Smith, of The New Republic and Olivia Crellin, journalist for the US division of BBC News, also favorited her tweet. Interestingly, the social media director for Charlie Crist, former Gov. of Florida, also tweeted out the game, calling it “incredible.”

Fusion’s front page currently boasts headlines such as, “What being transgender after 50 looks like,” and “Are ‘blue balls’ a real thing?”

Contributors to This is Fusion include the founding editor of Jezebel, Anna Holmes, who also writes book reviews for the Sunday New York Times.