Every year the media ignore the thousands who gather on the National Mall to celebrate life – in 2015, an estimated 200,000 gathered and ABC and NBC refused to acknowledge the March for Life. While conservative and religious organizations covered the annual event, one story that is often untold is the personal. This year, MRC Culture’s Katie Yoder spoke with six women eager to share their stories of heartbreak and hope on the other side of abortion – the perspectives the media want to censor.

“Just because my father was a rapist doesn’t mean I don’t deserve life,” she said.

Another woman, Travon Clifton, was pro-choice, until she found out that she too was conceived through rape. “Up until that point I did not know ... in High School, I was actually pro-choice. I used to write papers about that – a woman’s right to choose.”

But, “I realized that when I was supporting the exception, I was consenting to my own death.” 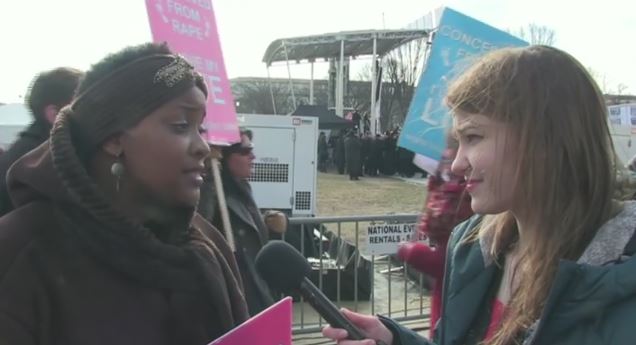 Others told of their experiences of being raped and choosing not to have an abortion. In light of the recent fallout over the Pain Capable Unborn Child Protection Act (which would have banned abortion after 20 weeks except in cases of reported rape), many women at the march wanted to assert that life was still worth defending, even amidst the trauma of rape.

Marisol Guzman was one who chose to have her baby despite going through the traumatic ordeal of being drugged and raped by a stranger. “Do I regret what happened? Yes. But was it also the greatest thing that happened to me? Yes.”

Another woman was raped by a friend’s husband. She now has a 3-year-old daughter whom she says is “the light of my life.” These women wanted to share that, after rape and after abortion. Despite the difficult situation, hope and healing can come. “I don’t look at my child as from a rapist, I look at her [as] from God,” she revealed.

Rebecca Kiessling, president of “Save the 1” campaign – referring to children who are conceived in rape – brought up the media bias in abortion coverage.

“There’s definitely a lot of media bias out there especially against a child of rape. They don’t ever want to talk about a woman with a story ... We get called horrible names. They never want to put a face to the issue.”

Travon Clifton agreed: “If we look at the message that society says, it says we are expendable. It says that there’s really no value in us, as if we were some kind of mistake.”

Not surprisingly, many women attending the March had abortions and came to regret them – a common situation. Even chart-topping rapper Nicki Minaj admitted the decision to have an abortion has “haunted her” the rest of her life.

“I bought into the radical Feminist lies of the 1960’s and 70’s ...Very typical of those who’ve had abortions, I had another one a year and a half later. It really did break me, but I just pushed forward.”

She explained that it took her decades of struggling with guilt and depression for her to realize the lingering effects of abortion.

“In those subsequent years you do a lot of things. You self-sabotage: drinking, drugs, eating disorders, risky behaviors, promiscuity – it just goes on and on.”

Eventually, she connected the dots. “It’s only through the grace of God that I started being truthful – and then I had to be truthful about what I had done.”

The thrust of the message these women shared was that there is not only help for women who were raped, but also hope and recovery after having an abortion. “It’s the greatest gift in the world to be a mother,” one woman from Silent No More stressed. “The pro-choice people that are screaming and yelling, they’re in pain. We need to not only pray for them but offer them healing. Love, and education of the young people, is the only thing that’s going to turn this thing around.”