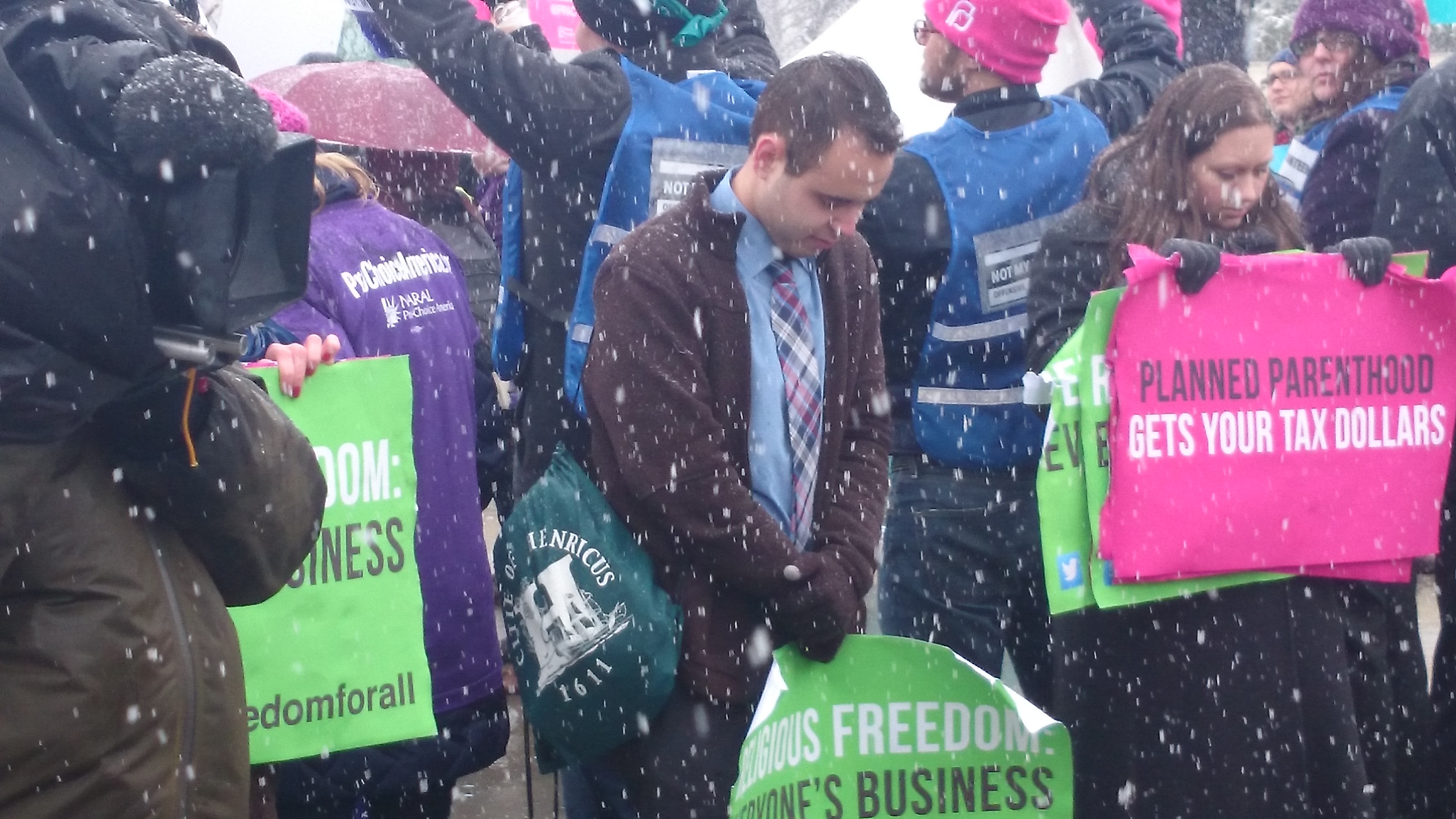 Friday is National Religious Freedom Day, and what better time to consider where threats to American religious freedom originate. (Hint – it’s not with Bible-thumping Baptist preachers or dogmatic Catholic cardinals.)

Progressives, who love to congratulate themselves on their tolerance and pluralism, are increasing intolerant when it comes to religion – or Christianity, anyway. Muslims seem to get a pass. On college campuses, Christian groups that refuse to allow non-believers to become officers have been forced to disband. In South Carolina, the atheist group Freedom from Religion Foundation pressured a privately-owned restaurant to cease offering discounts to customers who pray before their meals. The groups suggested Mary’s Gourmet Diner was in violation of the Civil Rights Act.

From ObamaCare to gay marriage to public prayer, the left and its media friends are squeezing the acceptable space religion is allowed in American’s lives – into a couple of hours on Sunday, and even that isn’t sacrosanct. Here are five recent examples.

1. The One Where the Fire Chief Got Fired

According to The New York Times, believing Christians who hold “virulent anti-gay views,” like those presented in the Bible, should not occupy high office. At issue was the recent firing of Kelvin Cochran as chief of the Atlanta fire department. Cochran had written a religious book and distributed it to his staff members. His self-published book, written for his church’s men’s Bible study group, included the offending passages:

“Uncleanness—whatever is opposite of purity; including sodomy, homosexuality, lesbianism, pederasty, bestiality, all other forms of sexual perversion.”

“Naked men refuse to give in, so they pursue sexual fulfillment through multiple partners, with the opposite sex, the same sex and sex outside of marriage and many other vile, vulgar and inappropriate ways which defile their body-temple and dishonor God.”

According to Fox News’ Todd Starnes, Atlanta Mayor Kasim Reed suspended Cochran last month. He was fired the day he was supposed to return, Jan. 6.

“I profoundly disagree with and am deeply disturbed by the sentiments expressed in the paperback regarding the LGBT community,” Reed wrote last November on his official Facebook page. “I will not tolerate discrimination of any kind within my administration.”

The Times weighed in with an editorial  on Jan.13, applauding the firing. The editorial claimed that Cochran’s “position as a high-level public servant makes his remarks especially problematic, and requires that he be held to a different standard.” Wow really? Well Cochran must’ve had a prior history of abusing gay employees, right? Actually, even the Times admitted, “that the investigation found no evidence that Mr. Cochran had mistreated gays or lesbians.”

Cochran’s firing got the attention of the national news media, as well as Christian groups across the country. The Family Research Council’s Tony Perkins led a rally Jan.13 in Atlanta in Cochran’s support at which he stated:

"The naked truth is that the actions taken against the chief are designed to send a message that will silence Christians and in effect force them to check their faith at the door of public service.”

2. The Case of the Gay Wedding Cake

Unfortunately, this has been all-to-common of a situation in recent years. One case is being re-opened however after audio from a July hearing, just released to the press Jan. 9, reveal the gay couple’s attorney, also a state official, made comments that were discriminatory and screamed of anti-religious bias.

Alliance Defending Freedom (“ADF”) filed a brief for Masterpiece Cakeshop in their case against Colorado Civil Rights Commission for being punished and made to take “re-education classes” (ie: indoctrination classes) for refusing to bake a “gay wedding cake” in 2012. Unfortunately, the court still found the baker guilty of discrimination, but not before Commissioner for the CCRC, Diann Rice made this revealing comment:

“Freedom of religion and religion has been used to justify all kinds of discrimination throughout history, whether it be slavery, whether it be the Holocaust… I mean, we can list hundreds of situations where freedom of religion has been used to justify discrimination. And to me it is one of the most despicable pieces of rhetoric that people can use – to use their religion to hurt others.”

Which is somehow worse than using one’s protected legal status to bludgeon others into compliant celebration of a lifestyle they find abhorrent.

3. That Time They Threw a Fit About Not Getting Free Birth Control From a Company They Didn’t Even Work For

When Hobby Lobby, along with several other small businesses filed a suit against the HHS Mandate that required certain birth control and abortifacient drugs be offered in every company’s health care plan, the media took note, claiming that not only was the business owner’s religious rights discriminatory, they were one step in the process of “religious extremists” taking over the country and controlling women.

When the Supreme Court effectively ruled in Hobby Lobby’s favor, the left went bananas. Writing for Salon, Al Jazeera columnist Paul Rosenberg claimed in his title, “This is a religious civil war” and warned Hobby Lobby was “only the beginning for new religious theocrats.” With the Tea Party in the House and “religious extremists” in the Supreme Court, he warned, “We're approaching a very scary time.”

Washington Post columnist Eugene Robinson explained how “long, long ago, there were segregationists who made a religious argument and said that they found somewhere in the Bible a justification for racial segregation in the South and, obviously, that did not hold water.”

4. The One Where “Your Religious Beliefs Seriously Infringe on my Right to Watch Reality Television”

“19 Kids and Counting’s” the Duggars and Duck Dynasty’s Robertson family have been frequent punching bags for the media because of their open sharing of their faith and values.  The media joined a petition made on Change.org to ban TLC’s “19 Kids and Counting” because the family matriarch, Michelle, participated in a local Arkansas campaign against transgender rights in public bathrooms. The media called the family “fear-mongers” who were “transphobic,” “bigots” “liars” and full of “total bullshit.”

Or what about that time when daughter Jessa Duggar compared abortion to the Holocaust? All hell broke loose in the feminist media who called her “deranged” “extreme” and “radical.”

Nothing is off-limits for these families. The New Yorker mocked the Duggars with a“Duggar Family Kama Sutra” satire piece, and Sadie Robertson, 17-year-old daughter of the Robertsons is frequently highlighted as some kind of strange creature for being openly celibate till marriage.

In October, the liberal Democrat mayor of Houston, Annise Parker, subpoenaed the sermons of five pastors who opposed a city “nondiscrimination law” that would, among other things, allow men to use women’s restrooms and vice versa.

The unprecedented attack on religious freedom was entirely ignored by ABC, NBC and CBS, while the Washington Post spun the story as being about “local pastors who oppose an equal rights ordinance that provides protections to the LGBT community.”