Matthews: Huckabee May Be Guilty of 'Sedition' for Urging Americans to Not Enlist for Military Until Obama Leaves Office

The offense which merits the charge? Huckabee urging Americans to not enlist in the U.S. military until after President Obama leaves office. Huckabee urges doing so because he asserts there has been "open hostility toward the Christian faith" by the Obama Pentagon toward America's servicemen and women, especially chaplains.

Later in the same program, Matthews ludicrously insisted that Huckabee is unaware of the Constitution's forbidding of religious tests for qualification for civil or military service and hinted that Huckabee is feverishly working for the Klansman vote.

Here's the relevant transcript (emphases mine: 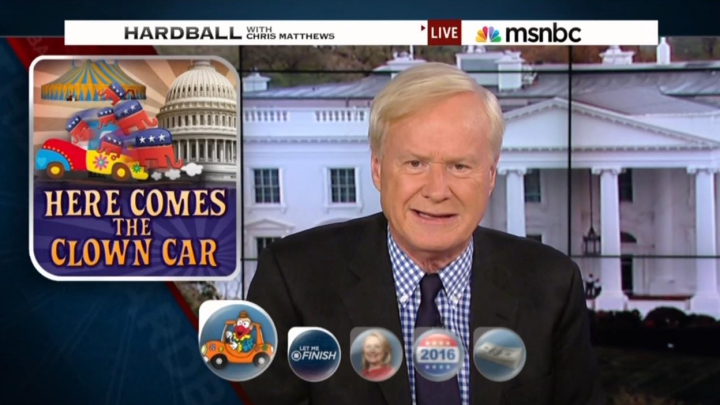 CHRIS MATTHEWS: And Mike Huckabee takes the wheel of the Republican clown car. He says parents shouldn't let their kids join the U.S. military until President Obama is out of office. Is that sedition? And this about a guy thinking about being commander in chief. What a full mooner he's become.

MATTHEWS: Hillary Clinton may be driving in her Scooby van, but former Arkansas Governor Mike Huckabee is currently behind the wheel of the 2016 GOP clown car. Huckabee, Huckle Chuckle, recently told a radio host that parents shouldn't encourage their children to serve in the U.S. Armed Forces until Barack Obama isn't president anymore. This from a guy who says he wants to be U.S. commander-in-chief.

MIKE HUCKABEE, radio clip from April 16 Mickelson in the Morning: I'd wait of couple years until we have a new commander in chief who will once again believe one nation under God and believe that people of faith should be a vital part of the process of not only governing this country, but defending this country.

MATTHEWS: Remember that thing in the Constitution, that curious little item that says no religious test for public office? Remember that one? The Chuckle Man doesn't know that.

MATTHEWS to David Corn: What do you make of Huckle Chuckle, Huckabee out there saying don't join the military. I thought it was patriotic service we're talking about in this country. Don't do it during a Democratic presidency.

DAVID CORN: We laugh at some of this stuff because it is so outrageous but at the same time it is so profoundly anti-patriotic. And it's really hard to imagine people saying this ten years ago. I mean I think, you know, the standards have fallen below where they used to be, even during the Clinton years. Go out there and saying don't join the military because this guy likes Muslims more than Christians. And, that's his message. It's untrue, it's insulting--

MATTHEWS: Yeah, I know. Some of these guys talk like they think the base is wearing sheets though. I think they may have underestimated who the Republican voter is. I think they have.

Of course Matthews and Corn are way off base. For one thing, yes, it is perfectly reasonable to think there were some Democrats out there in 2005 calling for parents to not let their kids enlist until George W. Bush was out of office. The Democratic Party was, after all, riled up in anti-Iraq War "Bush lied, thousands died" fervor.

What's more, nowhere in Huckabee's remarks did he say that the president prefers Muslims over Christians. Here's the crux of Huckabee's argument, as reported by The Blaze:

“This administration has had an open hostility toward the Christian faith,” Huckabee responded.

And I know that sounds like a bold statement, Jan, but when you have a president whose administration orders its chaplains to put its Bibles away, not to pray in Jesus name, not to counsel people on the issues of sexual morality; when you have this attitude that is more about promoting gay marriage and gay rights in the military than it is about being able to protect religious liberty for those people of faith, it’s going to be hard to find people that are truly devoted people of faith and Christian believers and Orthodox Jews and others.

Why would they want to be in a military that would be openly hostile and not just simply bring some scorn to their faith, but would punish them for it?

Hinting that Huckabee is a seditious "clown" who is vying for the Klansman vote is more proof that it's Chris Matthews who is driving the clown car at MSNBC.