Georgetown professor Michael Eric Dyson, himself an ordained Baptist preacher, was critical of black legislators and clergy who surrounded disgraced frat boy Levi Pettit at a March 25 press conference in which he apologized for his now-infamous racist chant about lynched blacks.

Appearing on Wednesday's Ed Show to discuss the apology, Dyson made these remarks shortly after Pettit left the press conference (emphasis mine):

Well, what I heard was an honest apology from a young man caught in a very difficult moment and publicly exposed in a way that he has not been used to and grappling with the consequences of his heinous act and the kind of vicious character of the racist slur that was used. 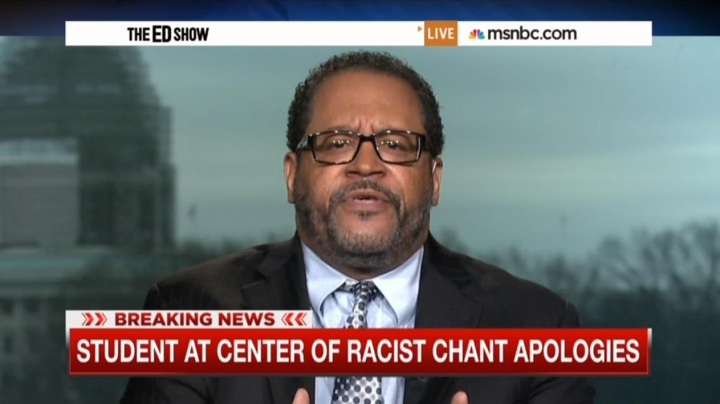 What I saw was the kind of choreography of black support to receive a white young man who has victimized others but who has now turned into a victim himself so to speak. He's the innocent victim of a process. He's a good kid, good looking boy, college student. He did a horrible thing and he's got the black elders surrounding, him putting their hands on his shoulder. I so wish black victims of white supremacy and victims of police brutality could receive the same in return. That white elders could surround them and extend to them an arm of love. I am not besmirching the character of those people or that young man, I'm talking about the choreography. This is the difficulty when we reduce the complexity of a systemic and structural problem to personal interactions. They are necessary, but they are insufficient.

The personal grief that he feels should also be connected to a broader systemic approach that talks about how we can uproot and then chastise these realities.

Perhaps it may depend on your own presuppositions, but my takeaway from the press conference was not that Pettit was being held forth as a "victim" but rather that while he rightly deserved the consequences of his actions, he was seeking forgiveness and reconciliation from those he offended and, indeed, sinned against.

After all, standing to Pettit's left throughout the press conference was, the Rev. Dr. J.A. Reed Jr., senior pastor of the Fairview Missionary Baptist Church of Oklahoma City, where the conference was held. According to the church's website, the congregation confesses that "The only means of being cleansed from sin is through repentance and faith in the precious blood of Christ." It's not surprising, then, that the interest of the church's senior pastor would be in publicly leading by example, extending forgiveness and demonstrating reconciliation for a repentant sinner, even when, or especially when, the sin is racism.

And of course, as a Baptist preacher, surely Dyson knows what Jesus had to say about the origin of sin. No, it's not some amorphous, soulless "system" outside of us but rather an evil sin-bent nature that lurks within us:

And he called the people to him again and said to them, “Hear me, all of you, and understand: There is nothing outside a person that by going into him can defile him, but the things that come out of a person are what defile him.” And when he had entered the house and left the people, his disciples asked him about the parable. And he said to them, “Then are you also without understanding? Do you not see that whatever goes into a person from outside cannot defile him, since it enters not his heart but his stomach, and is expelled?” (Thus he declared all foods clean.) And he said, “What comes out of a person is what defiles him. For from within, out of the heart of man, come evil thoughts, sexual immorality, theft, murder, adultery, coveting, wickedness, deceit, sensuality, envy, slander, pride, foolishness. All these evil things come from within, and they defile a person.”

It's incredibly easy for a TV pundit and left-wing academic to take potshots at Christian clergy who are practicing what they preach, and I'm sure the Rev. Dr. Reed will readily forgive Dyson, for he knows not what he does.