Bill Maher: 'I Am Much More Afraid of Ice [Melting]... Than I Am About ISIS'

In the midst of his September 10 sit-down chat with MSNBC's Chris Matthews, comedian Bill Maher blasted Republicans for hyping the threat of ISIS, which he insists is not that big a deal for Americans on American soil. Maher also took Joe Biden to task for thundering that we would chase ISIS to "the gates of Hell."

"Really, do we really need to make a bogeyman out of everybody?" Maher whined, noting that they are "not that different than so many other Islamic militants." Later in the discussion, Maher offered the he is "much more afraid of ice, as in melting, than I am about ISIS," Maher snarked as he praised former Secretary of State Hillary Clinton for suggesting days ago that climate change was a graver threat in the long term than Islamic extremism.

"Hillary Clinton was right about that. She won me back," Maher noted.

"Bill Maher, you're a smart guy," Matthews added in agreement before heading to a commercial break. 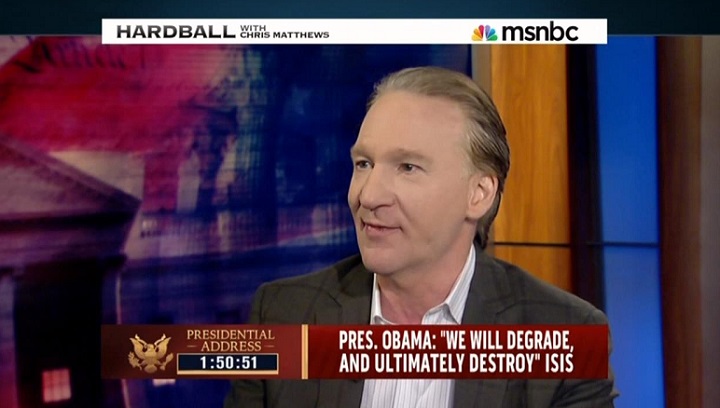