Truth is the first casualty in war, as the old saying goes. And truth about the Arab-Israeli war is hard to find. On Tuesday, CNN initially broadcast to the world news that Israelis had shot two Arabs in a "mosque" in Jerusalem. Only belatedly did they correct that false story and report that those terrorists shot in a synagogue had first murdered Jews worshipping peacefully. Those terrorists were armed with knives, axes, and a gun.

CNN apologized, of course, and will doubtless defend themselves as reporting only the news as it first came to them. It is nonetheless the case that blaming the Israelis first is part of the “narrative” the Left employs whenever dealing with the Arab-Israeli conflict.

In Gaza, celebrations broke out when news of this week’s murdered rabbis hit the street. This is the same reaction that Hamas supporters there had to the collapse of the Twin Towers on 9/11. Hamas is often translated as "enthusiasm," but the record suggests that "fanaticism" would be a better English equivalent for this murderous outfit. 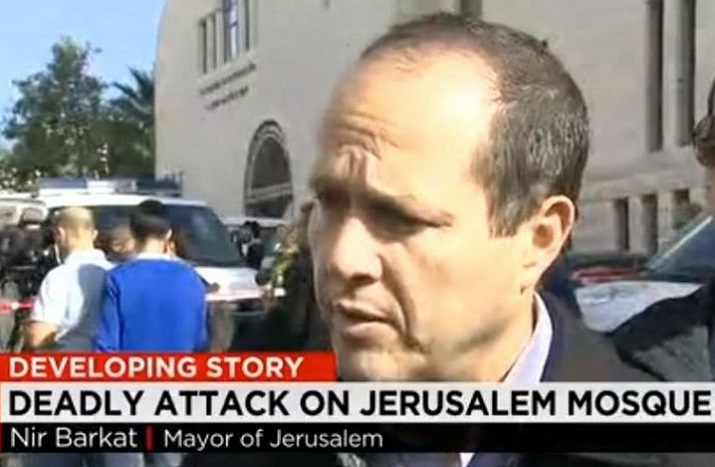 The other faction among the Palestinian Arabas is called Fatah (Triumph). And Fatah is the core group behind the so-called Palestine Liberation Organization (PLO), the group which invented airline hijacking in the 1970s as a terror tactic.

In 1989, Foggy Bottom began to view the PLO as a "partner for peace," and, with the collapse of the Soviet Union, the PLO had to hunt for another source of funding. They found it in a credulous State Department.

Since then, U.S. taxpayers have been milked up to $500 million a year to pay PLO chief Yassir Arafat and, following his death in 2004, his successor Mahmoud Abbas. The supposed reason for these payments has been to facilitate what is called "the Mideast Peace Process." Under this arrangement, the PLO has shrewdly pocketed our money and merely subcontracted its terrorist activities.

The PLO Charter still calls for the elimination of Israel. The PLO flag still shows a map of the Mideast with no Israel on it. In Arabic, Mahmoud Abbas regularly incites his followers to violence against the Jews—all the while he coos like a dove when he speaks in English. Abbas has dedicated public squares to "martyrs"—those terrorists who blow themselves up and kill Israeli civilians.

Lately, PLO boss Abbas has formed an alliance with Hamas, his former rivals. This has made public what was long true in secret—our supposed “partners for peace” are in fact partners in crime.

Little of this is being reported by CNN or by the so-called mainstream media in the U.S. Much less is it being accurately reported in the European press. Anti-Semitism is on the rise in Europe, even in such previously safe havens as Sweden.

Millions of Christians are praying for the peace of Jerusalem. We see renewed attacks from terrorists, but these are "incited"—in Prime Minister Benjamin Netanyahu’s words—by the PLO and Abbas. (He is routinely described in our press as the "president" of the Palestinian Authority. This authority is hard to credit when he has repeatedly canceled elections because he knows that Hamas fanatics would oust him.)

What should the United States do in this instance? We should not engage in hand-wringing and the usual round of deploring and issuance of pro-forma denunciations of violence. We should not call "on all sides" to refrain from violence when the terrorists are wielding axes and Israeli police are using deadly force only in response to cold-blooded murder.

Instead, we should cut off the PLO from all U.S. taxpayer funding. And we should immediately move our U.S. Embassy to Jerusalem. Such a move would only enrage the Arab "street," we are warned. How much more enraged can they be? Axe-wielding murderers cutting down peaceful worshipers? Dancing in the streets to celebrate terror attacks?

It’s time for an American policy of self-respect and firmness in the Mideast. It’s time to prove we stand with Israel. We don’t need more of President Obama’s empty words. He says he will "have Israel’s back" while hatchet wielding killers have their front.

We should remember Winston Churchill’s famous words: "Let the Jews have Jerusalem; it is they who made it famous." We believe it is God who made it famous, but He used the Jewish people as His chosen instrument.