When veterans recently accused a columnist of “defiling our flag, Veterans Day and their military service” for hyping her “Flag of Reproductive Freedom,” she tacked the blame on me.

On Veterans’ Day, I wrote a piece for NewsBusters that called attention to a “Flag of Reproductive Freedom” owned by Pulitzer Prize-winning columnist and Democratic senator’s wife Connie Schultz. Schultz had written about “a favorite piece of artwork,” based on the American flag, that boasts 28 buttons representing a month of birth control pills instead of the 50 stars for states.

Angered veterans responded to my piece – and so did Schultz. 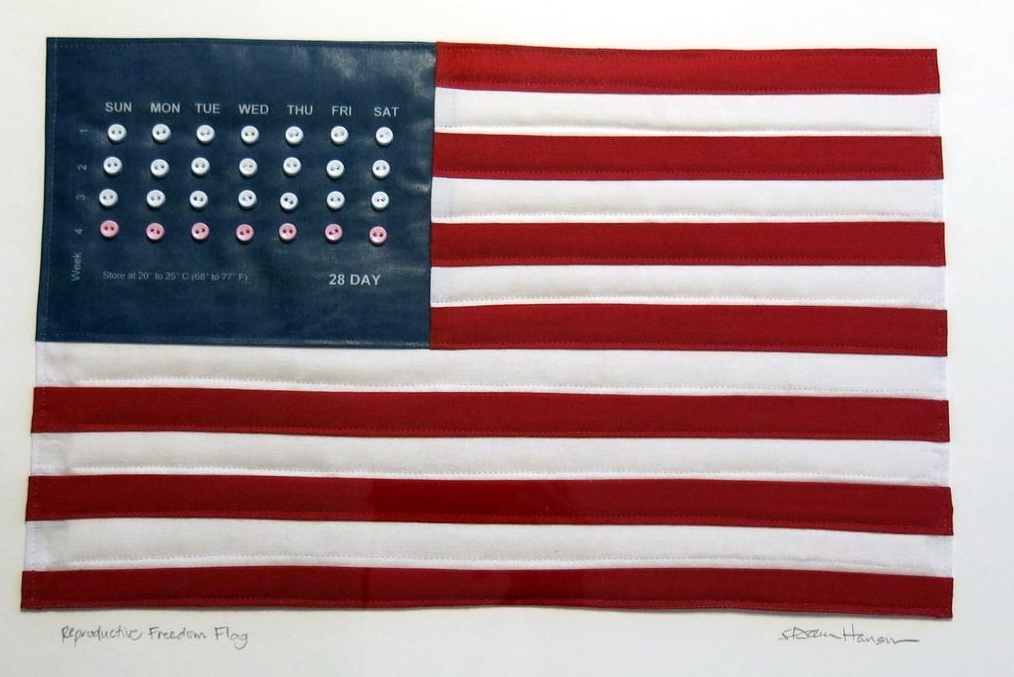 In her reaction, Schultz stressed that on Veterans Day, she tweeted twice about Vietnam veterans’ fight with Agent Orange. “I mention those two Veterans Day tweets,” she continued, “to help you appreciate my surprise the next morning when I discovered a story on NewsBusters depicting me as disrespectful of veterans.”

Schultz infers too much. I wrote the word “veterans” once in my piece – in relation to Veterans’ Day:

On the eve of Veterans’ Day, Pulitzer Prize-winning columnist and senator’s wife Connie Schultz tweeted a “Flag of Reproductive Freedom” to her 11,000 followers.

It was more to note the irony – or cluelessness – of her timing. From that reference, Schultz translated, “This piece is making the rounds and meant to shame me as disrespectful to veterans.”

No, the piece was meant to highlight the inanity of the flag and the left-wing feminist assumptions behind it. That veterans saw reason to take offense is incidental to the original intent.

And, as she whined soon after, I wasn’t the one accusing her of disrespect towards veterans. Veterans themselves were. She wrote:

You can imagine the email and social media response from angry veterans accusing me of defiling our flag, Veterans Day and their military service.

She continued, “Had Yoder committed the most rudimentary act of journalism — we like to call it reporting — she would have found both of my Veterans Day tweets and plenty of my coverage of veterans, too.”

I did see her tweets. They were irrelevant to my piece.

But I’m happy not to fit into Schultz’s definition of “reporting.” Reporting, according to Schultz, means “call[ing] an artist and interview[ing] her” – on “a favorite piece of artwork that hangs in a prominent place in our home.” 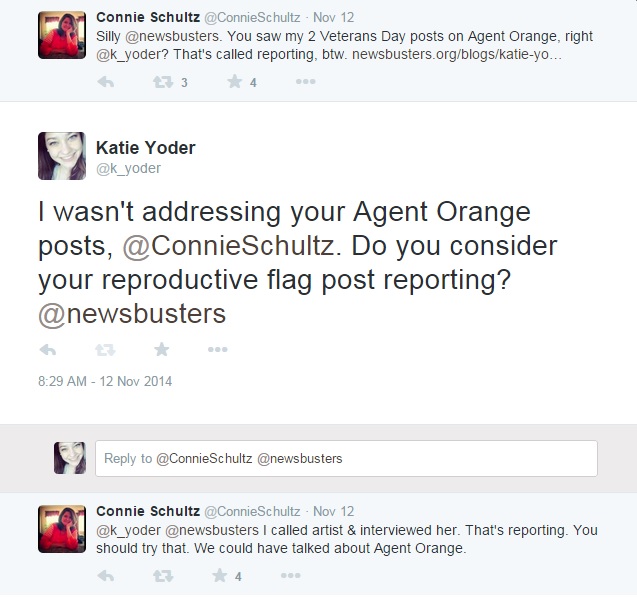 And while Schultz complained that “[Yoder] now thinks she's going take me on via Twitter. Because that's the place for meaningful dialogue, definitely,” she initiated our Twitter conversation.

“A quick tutorial,” her piece continued. “Birth control prevents unwanted pregnancies and, therefore, abortions. This has nothing to do with Veterans Day, but welcome to the world of right-wing blogging.”

(Or left-wing whining? She made abortion restriction an issue in her original “reproductive flag” story.)

Schultz added, “I usually subscribe to the ‘don't feed the trolls’ mantra and ignore right-wing screeds for attention. Yoder's piece, however, seemed to be getting some traction.”

Or, as she saw it, the incident was as an “opportunity to raise again the issue of Agent Orange and the ongoing problem of hit-and-run blogs masquerading as journalism.”

Schultz surely owes an explanation to these veterans who served and suffered proudly, even in the face of tragedies like Agent Orange. Where she sees “art,” they see a desecration of the flag they fought for –– and their friends died for.

And a response blaming me doesn’t quite cut it.