A man starts a multi-billion dollar business that employs tens of thousands, gives millions to charity and touches innumerable lives in his near century of life. So why would every obituary of him mention something he didn’t say about a topic completely unrelated to the man’s life and legacy?

Because of the media obsession with that most fashionable of victim groups – gays.

On Sept. 8, CBS Co-anchor Charlie Rose announced the death of the “billionaire founder of Chick-fil-A” on “This Morning.” While Rose noted how the “company built around faith” grew into an “1800 store fast food giant,” he also inserted how, “Cathy’s son, the company’s CEO, created controversy two years ago speaking out against same-sex marriage.”

The same day, NBC’s “Nightly News” Anchor Brian Williams also remembered the “well-known founder:” a man “as well known for his religious devotion as he was his devotion to fast food.” But Williams also brought up how “his son’s comments on gay marriage brought controversy.”

“Cathy's son, Dan, currently chairman and president of the chain, had told the Baptist Press in 2012 that the company was ‘guilty as charged’ for backing ‘the biblical definition of a family.’ Gay rights groups and others called for boycotts and kiss-ins at Cathy's restaurants. The Jim Henson Co. pulled its Muppet toys from kids' meals, while politicians in Boston and Chicago told the chain it is not welcome there.” 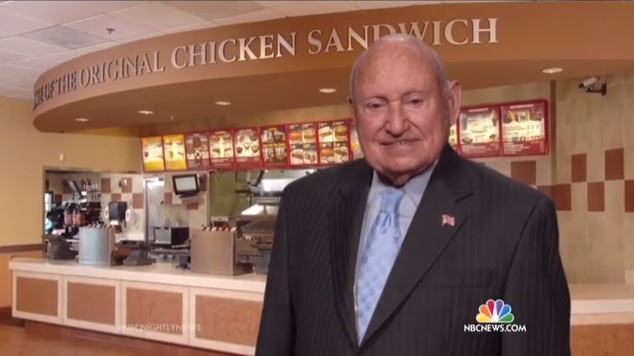 Also from The Washington Post, Abby Ohlheiser noted “Cathy’s son, Dan, who is currently running the company” and how his “2012 comments on gay marriage prompted a boycott of the chain” while, in another report, WaPo’s Fred Barbash repeated how: “the chain provoked controversy and a boycott among gay rights advocates.” Another WaPo piece from (Bloomberg News) delved even deeper –dedicating six paragraphs to the “controversy.”

“Their donations to religious organizations active in the debate over the definition of marriage landed the family, and Chick-fil-A, in the middle of an uproar,” writer Laurence Arnold explained. He continued to recognize how, “Gay rights groups,” revealed “Chick-fil-A’s charitable arm gives millions of dollars to Focus on the Family, the Eagle Forum, the Family Research Council and other organizations opposed to gay marriage.”

Also from Bloomberg, Venessa Wong mentioned the news – but as an aside: “Truett’s son Dan Cathy (whose remarks about gay marriage attracted controversy) has been chief executive of the chain since November.”

With another angle, USA Today’s Bruce Horovitz inserted: “Under conservative CEO Dan Cathy -- famous for comments, for which he has since apologized, that questioned gay marriage -- Chick fil-A is eager to attract Millennials.”

The chain “became embroiled in controversy” which “led to criticism and boycotts from gay-rights and liberal groups,” according to The Wall Street Journal’s Michael Calia and Julie Jargon.

Inserting a pun, CNN’s Saeed Ahmed declared that, “Gay and lesbian rights groups have had a longstanding beef with Chick-fil-A over what they claim is the company's opposition to gay marriage.”

Joining in with the rest, The New York Times’ Kim Severson highlighted how Cathy’s WinShape Foundation “gave millions of dollars toward their efforts to oppose extending marriage rights to couples of the same sex.” She continued: “Gay and lesbian activist groups and bloggers began investigating the foundation’s donations, and the issue blew up in 2012 after his son, Dan, the company president, gave a series of provocative interviews.”

From a more bloggy perspective, Bustle’s Lauren Barbato illustrated how, “Dan Cathy’s comments on gay marriage sparked nationwide boycotts and protests of the chicken franchise.” But she recognized that, “Despite the company’s anti-gay remarks, Chick-Fil-A has been performing incredibly well.”

Hollywood Life staff offered more inlflammatory remarks on “the chain [that] came under fire in 2012 following some fairly controversial statements about gay marriage.” Although “it was indeed Dan who made the controversial statements,” they noted, “Truett’s hands were not necessarily clean, either” because of his Winshape Foundation donations.

As in the past, the media are loath to forget any chance to bring up gay marriage.