On Wednesday night, NBC Nightly News anchor Brian Williams apologized for falsely claiming to have been shot down over Iraq in 2003 but failed to inform his viewers that he had repeatedly promoted this lie in the past, including during an appearance on CBS’s Late Show with David Letterman on Tuesday, March 26. 2013.

Speaking to Letterman, Williams proclaimed that while in Iraq “we were going to drop some bridge portions across the Euphrates so the third infantry could cross on them. Two of our four helicopters were hit by ground fire including the one I was in. RPG and AK-47's."

During the 2013 appearance, the NBC Nightly News anchor repeated the lie that while reporting in Iraq, his helicopter came under heavy fire:

We're not near any U.S. troops. So we got hit, we sat down, everyone was okay, our captain took a purple heart injury to his ear in the cockpit but we were alone. They started distributing weapons. We heard a noise and it was Bradley fighting vehicles and Abrams tanks coming. They happened to spot us. This was the invasion. The U.S. invasion they saw us.

In fact, according to Stars and Stripes, Williams’ account is far from what actually occurred on the ground: 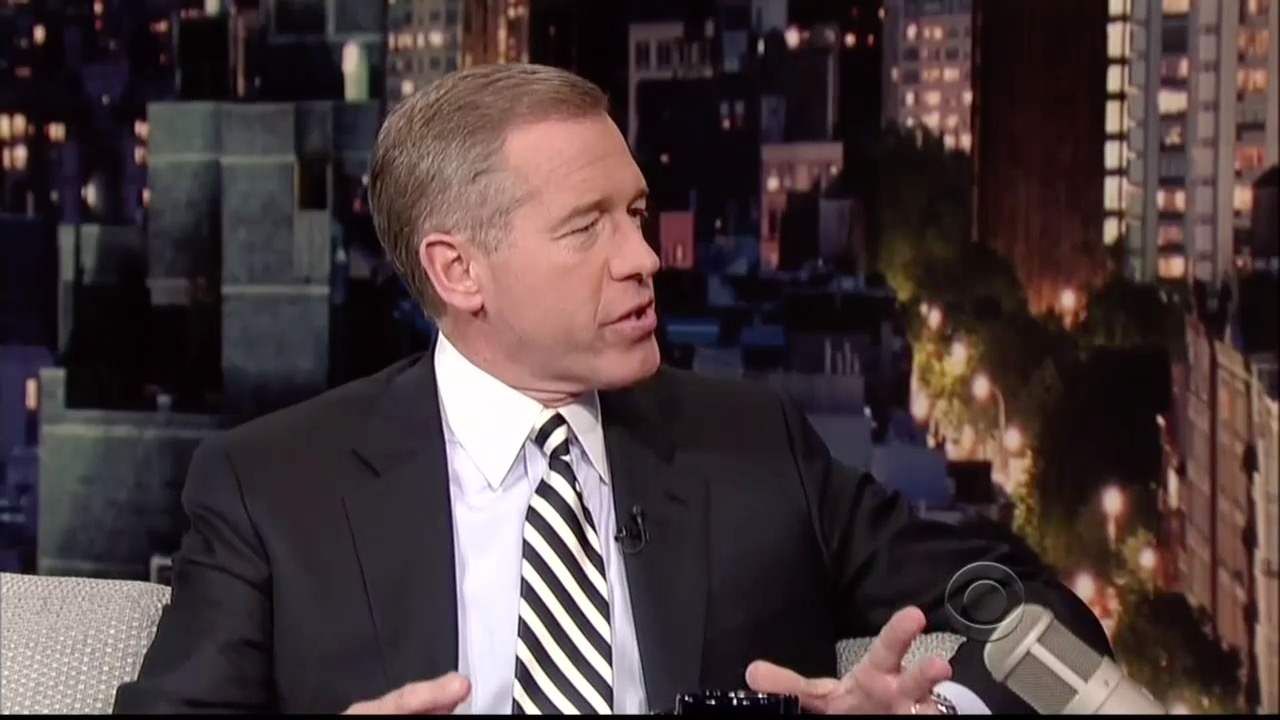 Williams and his camera crew were actually aboard a Chinook in a formation that was about an hour behind the three helicopters that came under fire, according to crew member interviews.

That Chinook took no fire and landed later beside the damaged helicopter due to an impending sandstorm from the Iraqi desert, according to Sgt. 1st Class Joseph Miller, who was the flight engineer on the aircraft that carried the journalists.

>> Flashback: “The Worst of Brian Williams: Marking His 10 Years of Liberalism as Anchor of NBC Nightly News” <<

While Williams did acknowledge during his interview with Letterman that his helicopter was stuck on the ground for three days due to a sandstorm, he allowed the CBS comedian to claim that the NBC reporter was “on the ground in combat." Rather than correct Letterman, Williams insisted that he was caught up in combat “unbeknownst to anyone back here” in the United States.

DAVID LETTERMAN: Tell me -- and if I knew this I forgot it, and if I forgot it I'm ashamed. Something happened 10 years ago in Iraq. Tell people what that occurred

BRIAN WILLIAMS: I brought a photo which arrived in my e-mail of where I was tonight a decade ago.

WILLIAMS: This very day. This was me ten years ago and a young command sergeant major. I was in Iraq. Now a couple of caveats here. As war correspondents go, I am the Herb Schmendrick of war correspondents. I’m not terribly good at it. It’s not what I do full time. I'm mostly New York-based. I do go cover these two wars we've been fighting and when I do I like to go out on patrol. I like to get out in it, a guy like Richard Engel.

The amount of fire we took on this day, his name for that is "Tuesday." His name for that is "every day of his life." We were in some helicopters. What we didn't know was we were north of the invasion. We were the northern most Americans in Iraq. We were going to drop some bridge portions across the Euphrates so the third infantry could cross on them. Two of our four helicopters were hit by ground fire including the one I was in. RPG and AK-47's. 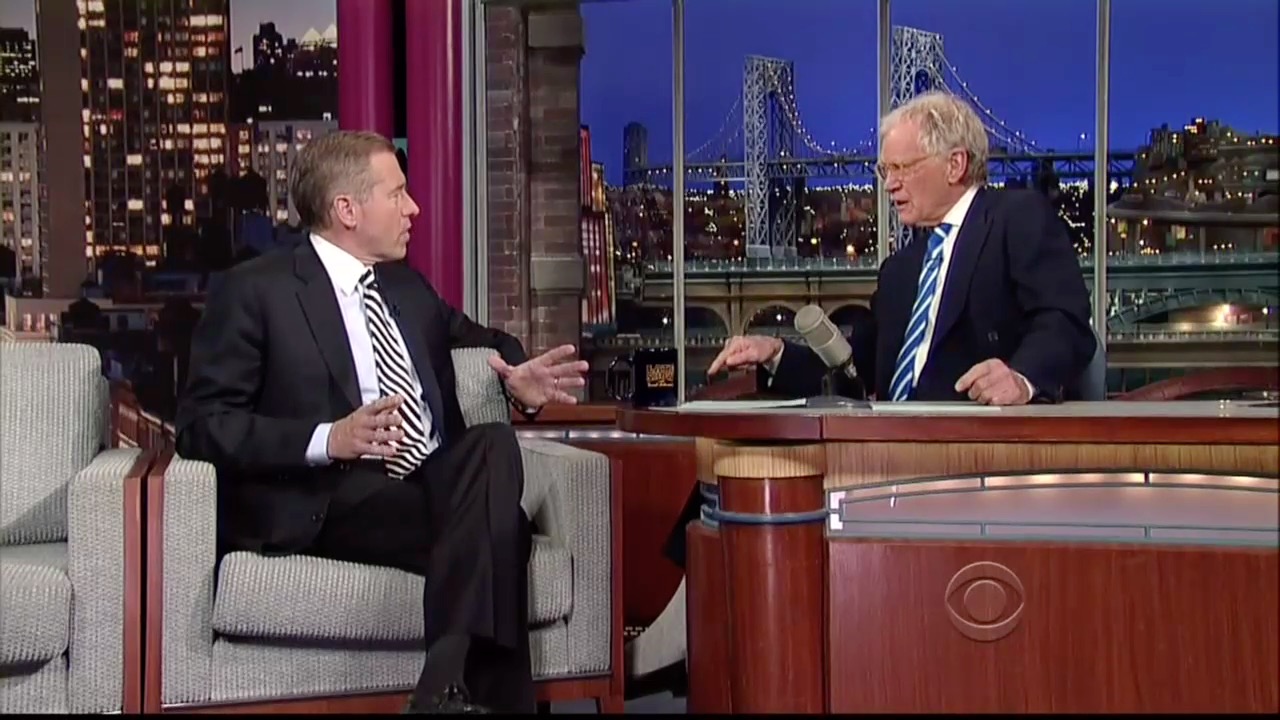 LETTERMAN: What altitude were you hit at?

WILLIAMS: We were only at 100 feet doing a hundred forward knots because we had these massive pieces of bridge beneath us on swings.

LETTERMAN: What happened the minute everybody realizes you've been hit?

WILLIAMS: We figure out how to land safely and we did. We landed very quickly and hard and we put down and we were stuck. Four birds in the middle of the dessert and we were north out ahead of the other Americans.

LETTERMAN: Oh, my, as a guy, as a journalist what do you think? This is a great position to be in or holy crap I've got to be out of here?

WILLIAMS: More toward the holy crap. The "this is great" was flying over Iraq. Holy crap started when I realized the now deceased former four star general we were traveling with, Wayne Downing-- said to me using an old Vietnam era term because he was a Vietnam infantryman "we're over Indian country." You'll forgive the political incorrectness. He said this is unpoliced virgin territory. We're not near any U.S. troops. So we got hit, we sat down, everyone was okay, our captain took a purple heart injury to his ear in the cockpit but we were alone. They started distributing weapons. We heard a noise and it was Bradley fighting vehicles and Abrams tanks coming. They happened to spot us. This was the invasion. The U.S. invasion they saw us. They surrounded us for three days. During the sand storm that was so big it suspended the war effort. It was called Orange Crush and they got us out of their alive.

LETTERMAN: You were on the ground in combat for three days?

WILLIAMS: Unbeknownst to anyone back here. NBC sent my wife and children to the breakers in Florida to keep their minds off of it and keep them occupied because no one knew where we were. We couldn't be in touch. Tom Brokaw was the anchor, the war coverage was going on. Our late friend David Bloom was traveling in a tank across the countryside. This was prior to his death not because of, but during combat. We got out of there and everything is fine. But this young command sergeant Major Tim Turpack who is on something like his eighth deployment, he's in Korea, sends me this picture "hey, buddy, here we were ten years ago this week."