​With the GOP set to officially take control of the United States Senate in January, Politico decided it was the perfect time to play up Democrats’ criticism of Senator Jim Inhofe (R-Okla.), incoming Chairman of the Senate Committee on Environment and Public Works, for being “the Hill’s most flamboyant critic of climate research.”

In a piece published on November 10, authors Elana Schor and Alexander Burns promoted how “Democrats aspire to make Inhofe the face of GOP knownothingism, while at least one Republican consultant says his style of skepticism could create headaches for candidates up and down the ticket in 2016.”

The article continued to highlight the efforts of liberal groups targeting Senator Inhofe:

Already, the liberal opposition research group American Bridge plans to monitor Inhofe’s every utterance on climate change, and liberal strategists are planning how to use his chairmanship as political fodder to attack Republicans more broadly in the next election. One Senate Democratic aide called Inhofe’s promotion a “silver lining” to Democrats’ losing the chamber.

“Leave it to today’s GOP to put someone who doesn’t believe in basic science at the helm of the committee that oversees environmental protection,” Democratic National Committee spokesman Michael Czin said in an email Monday, putting the party’s private smirking on the record. “It’s unfortunate that Republicans continue to put more stock in their rigid ideology than science and what’s best for the country.”

The Politico writers then turned to pseudo-Republican Mark McKinnon to offer some advice for the GOP: 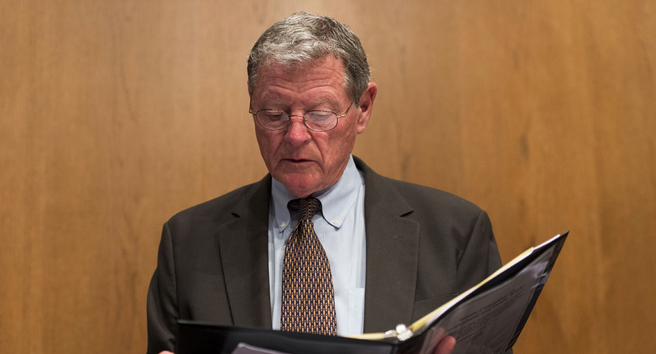 The turnabout threatens to put Republicans, who lately have deployed the artful dodge of “I’m not a scientist” when asked whether humans are altering the climate, in a tough position: Are you with Inhofe or are you with science?

“My own view,” Republican consultant and former George W. Bush adviser Mark McKinnon wrote in an email, “is that it would be helpful to the GOP brand that even if the candidates are not scientists, perhaps they could consult with some.”

Rather than consult actual Republican strategists to discuss Inhofe’s views on climate change, Politico instead chose to list off ways in which “Inhofe has never shied away from going much further” in his opposition to climate change:

During his previous turn chairing the Senate Environment and Public Works Committee, from 2003 to 2007, Inhofe gave greens chronic heartburn and colorful combat. He wrote in a 2003 paper that rising temperatures “may have a beneficial effect” and compared the U.N.’s Intergovernmental Panel on Climate Change to “a Soviet-style trial.” He invited author Michael Crichton to testify in 2005 about a novel that imagined eco-terrorist groups causing disasters to further their crusade against climate change.

While the authors do briefly concede that Democrats’ efforts to attack Inhofe “may sound more than a little hollow after the 2014” they made sure to promote anonymous GOP strategists who are pushing a different political strategy:

Yet national GOP strategists also privately agree that the party must avoid a Flat-Earther image to compete in national elections. As damaging as the war-on-coal attacks may be against Democrats in oil country and Appalachia, the national electorate is not quite as enamored of fossil fuels — and is acutely wary of candidates who appear impervious to scientific evidence.

"It all depends which Senator Inhofe shows up,” Kalee Kreider, a former Gore spokeswoman turned independent climate consultant, said by email. “If it’s the same old Senator Inhofe, known more for his grandstanding and posturing than policy-making, then I would suspect that the Senator will not only be seen as an ineffectual chairman but also a liability to his party.

If, however, the new Senator Inhofe shows up, the one who wrote the Tulsa World editorial this Saturday which articulated a positive vision, then, I suspect that it could be a new situation that the environmental community hasn’t seen from him before. “My wager?” she asked. “A leopard can’t change its spots.”