NY Times Blamed Reagan/Bush for LA Riots, But No Blame in Baltimore

Is President Obama responsible for the Baltimore riots? If you take a look at how The New York Times portrayed the reaction to the Los Angeles riots of 1992, apparently so.

For those who came in late, in 1992 one Rodney King was arrested by Los Angeles police after a high speed chase.  King was later found to be legally intoxicated under California law as well as having traces of marijuana in his blood. The arrest was captured on videotape. The police were seen beating King -- and, as with Baltimore and today’s case of Freddie Gray, all hell soon broke loose when the officers were acquitted. Unlike Freddie Gray, Rodney King did not die, and in the day eventually emerged amid the riots to plead for calm.

Today, as the events in Baltimore unfold - now with formal charges including murder brought against six Baltimore cops -  there is one striking aspect that is not present as it was in Los Angeles.

That would be blaming the President of the United States.

Yes, that’s right. As Los Angeles burned, the media was quick to finger the real culprit as then-incumbent Republican President George H.W.Bush. Not to mention his predecessor, Ronald Reagan - then four years gone from the White House.

CLINTON, IN ATTACK ON PRESIDENT, TIES RIOTS TO ‘NEGLECT' 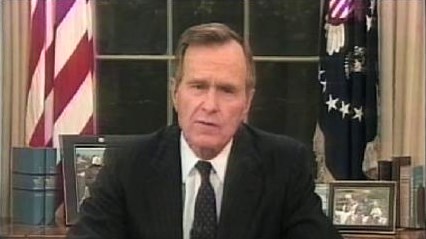 The story said, in part:

“….Gov. Bill Clinton said yesterday that the riots in Los Angeles resulted in part from ’12 years of denial and neglect’ of festering social problems under Presidents Ronald Reagan and George Bush.

….Mr. Clinton said the real cause of the riots included ’12 years of denial and neglect’ of social problems under the Reagan and Bush Administrations.”

Got that? Clinton’s charge was front-paged. The Times made a point of putting the-then Democratic presidential candidate’s accusation about the Los Angeles riots and what he said was the real reason behind them on the front page as if The Gospel itself. Which, in the way of liberal media, it was.

Now?  After Baltimore erupts over the death of Freddie Gray? With Obama, not Reagan or Bush, in the White House? With progressive Democrats in charge of Baltimore for almost five decades straight? And the last four of five liberal Baltimore mayors being black - two women and two men? And one of those liberal mayors -- the white Martin O’Malley -- now out there running for president as the new JFK?

Now there’s nothing but silence from the Times about just who is responsible for what surely must be the “denial and neglect” in Baltimore that has occurred in the Obama era and after the eight years of the Bill Clinton presidency. In fact, to do the math, fifteen of the last twenty-two years have seen the White House occupied by either Clinton or Obama.

So what’s up with this?

The answer isn’t hard to understand. What’s at stake in Baltimore - and in various cities around the country that have, like Baltimore, been run by liberals for decades - is liberalism itself. When all those protestors stand in front of cameras and complain about the system or no jobs or lack of opportunity or good schools or crime and gangs? They are citing the end result of decades of liberal policies that have had an iron grip on these cities. There is no way in the world that the liberal media - the Times in this case - will contribute to the bonfire by blaming Obama or Clinton much less the liberalism that has run Baltimore lo these several decades. 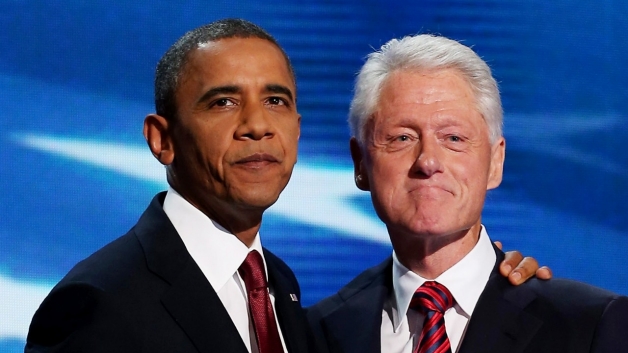 Case in point in this Times editorial on the Baltimore situation. One will read in vain to find any condemnation of liberalism or Presidents Obama and Clinton or the black mayors who have been running the city. Instead the paper says: “The Baltimore Police Department has a particularly egregious history” of  a “well-documented history of extreme brutality and misconduct.”

Yet mysteriously, this “egregious history” has somehow just, well, happened. President Obama has nothing to do with this, nor President Clinton. No “denial and neglect” from them. And that long string of liberal mayors? Beginning with today’s Stephanie Rawlings-Blake and including presidential candidate Martin O’Malley? Somehow all that “egregious history” and “well-documented history of extreme brutality and misconduct” just kind of, um, happened. All these liberal mayors who have been running this Baltimore Police Department for decades? How could they possibly have anything to do with this?  After all, they were only in charge.

Even more mysteriously still is that back there in May of 1992 as Los Angeles erupted as a result of what the Times headlined as the result of those Reagan-Bush years of “denial and neglect” - New York City was just fine. Calm. Cool. Not a riot in sight. And who did the New York Times credit with this? Not Reagan or Bush, to be sure.

No, the Times credited the black, liberal mayor of New York - David Dinkins. In a May 6, 1992 editorial - the very day it was front-paging Clinton’s charge of Reagan and Bush “denial and neglect” - the Times ran an editorial titled "New York Holds Together"  in which the Times rhapsodized about “Mayor David Dinkins’s sensitive leadership” which “certainly contributed to a sense of calm and control.”

Thus the game.  When Baltimore explodes, for the Times and liberals in general it isn’t Obama’s fault or Clinton’s fault. It certainly isn’t the fault of all those liberal Baltimore mayors - four of whom were black and one of whom is out there running for the Democratic presidential nomination - who have been in charge of both the cops and the city for decades. But when the riot is in Los Angeles in 1992? It’s those damnable culprits of denial and neglect, Reagan and Bush. And if the sainted black liberal Mayor Dinkins is in charge of a non-rioting New York? Why, its because he’s a good liberal and all those good liberal policies work!

The other day The Wall Street Journal ran an editorial on Baltimore titled "The Blue-City Model:  Baltimore shows how progressivism has failed urban America." The piece began by saying:

You’re not supposed to say this in polite company, but what went up in flames in Baltimore Monday night was not merely a senior center, small businesses and police cars. Burning down was also the blue-city model of urban governance.

…But as order starts to return to the streets, and the usual political suspects lament the lack of economic prospects for the young men who rioted, let’s not forget who has run Baltimore and Maryland for nearly all of the last 40 years.

The men and women in charge have been Democrats, and their governing ideas are "progressive."

Exactly. And note that first line? The one that reads “You’re not supposed to say this in polite company…”  That is precisely what is at work right now in the pages of the New York Times and what was at work all the way back there in 1992. If a riot happens on the watch of a conservative president - its not only his fault but also that of his conservative predecessor long gone from office. But a riot over police conduct in a liberal president’s era? In a city that has been run from top to bottom by liberals - black mayors, city council members and at this very moment a black police commissioner? Nothing to see here, folks. Move along.

Typical. Utterly. Worse still it is a silent OK for Baltimore’s liberals to just keep doing what they’re doing. The anguished pleas of their black citizens in fact, for all the noise, just one big no big deal.

The degree of outright cynicism of liberal media outlets never ceases to astound.