Look no further for a textbook example of why the Boston Globe is seen by critics as kneejerk liberal.

In today's paper, most of the cover and two full inside pages within the "Ideas & Opinion" section (eight pages in all) are devoted to a single cause -- urging Elizabeth Warren, a Bay State senator and the Democrats' most ardent class warrior, to run for president.

The lead editorial is titled "Senator Warren, step up and run," next to a huge photo of a contemplative Warren on the first page of the section. Adjacent to the editorial is a column by Anna Galland, executive director of MoveOn.org Civic Action, with the headline, "Her message for the middle class resonates across the spectrum." 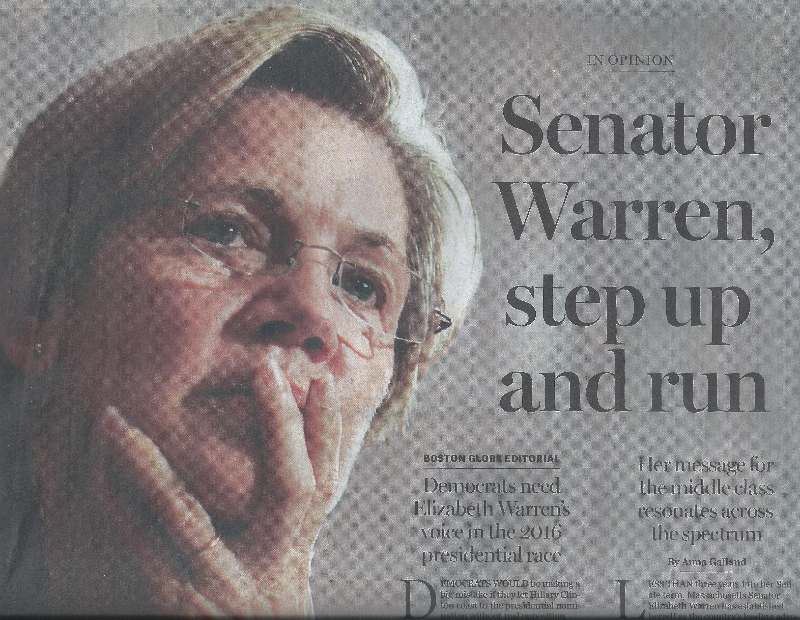 Just in case Globe readers miss the message that the broadsheet is bonkers for Warren, two more op-ed columns inside amplify the point. American Prospect co-founder Robert Kuttner, a Brandeis professor and HuffPo contributor, writes a piece titled "If she does run, she'll surprise the skeptics."

Making it four for four is an offering from Bloomberg Businessweek columnist Joshua Green, headlined "Party needs a credible threat to Clinton in the primaries."

Even the most Warren-besotted lefty can't avoid discerning a pattern -- the Globe's lead editorial and not one, not two, but a trio of pro-Warren for president columns, and not a single dissenting voice. In other words, the kind of debate she relished in the faculty lounge at Harvard.

Hold on a sec, there is dissension in the ranks, though easily missed unless you squinted. There on the bottom of one of the inside pages is a pull-quote from the only conservative in the mix, Washington Post columnist Charles Krauthammer. His observation -- "What you're feeling now is Early Onset Clinton Fatigue. The CDC is recommending elaborate precautions. Forget it. The only known cure is Elizabeth Warren." Yes, even the steely-eyed Krauthammer apparently isn't immune from Warren's alleged charm.

When I first saw the ensemble, I hoped it included an offering from Jeff Jacoby, the Globe's outstanding conservative columnist. Jacoby did have a column today in favor of a single election day instead of a "long-drawn-out election season." It easily could have run later this week, this month, whenever, with Jacoby instead possibly pointing out how a Warren candidacy could, for example, bitterly divide Democrats and grease the skids for GOP victory in 2016, along the lines of another senator from Massachusetts, Ted Kennedy, taking on the Democrat powers that were in 1980 (incumbent Jimmy Carter) and helping elect Ronald Reagan.

Two other things that stood out among the Globe's blanket Warren advocacy. Here is what Kuttner predicted would happen if she ran --

If Warren did join the race, she would take the party rank-and-file by storm. There is a hunger for a candidate who can articulate all the frustrations felt by middle- and working-class people, and especially by the young. The Republican Tea Party types get to play that role only because of the vacuum on the Democratic side.

As close as a Globe columnist ever comes, Jacoby aside, of writing something accurate and favorable about the tea party. And is it a "vacuum" among Democrats -- or indifference? It's tough to play that role when you're perpetually focused on expanding government and creating jobs for more bureaucrats.

Then there was this from Bloomberg's Joshua Green --

Hillary Clinton's protean tendencies make it hard to know exactly where she will come down on economic and financial-regulatory matters.

Protean? Run that one through the De-Euphemizer Machine and it comes out duplicitous.

By all means, here's hoping Warren tosses her headdress in the ring. We're long overdue for a Native American in the White House, though I'd prefer the real deal instead of the self-proclaimed.