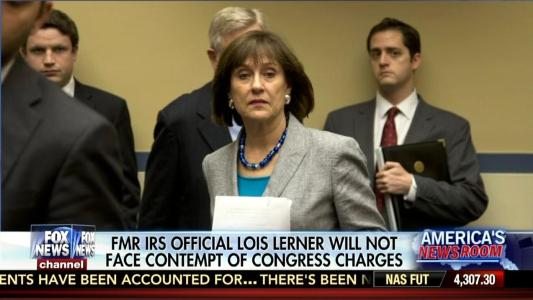 On Wednesday, the Department of Justice announced it would not be seeking contempt charges against Lois Lerner for refusing to testify to Congress on the IRS targeting scandal.

The Big Three (ABC, CBS, NBC) networks, so far, have refused to report on this big development in the Obama IRS scandal that they apparently just don’t want to talk about any more.

“The Justice Department will not seek criminal contempt charges against former IRS official Lois Lerner, the central figure in a scandal that erupted over whether the tax agency improperly targeted conservative political groups. Ronald Machen, the former U.S. attorney for the District of Columbia, told House Speaker John Boehner (R-Ohio) in a seven-page letter this week that he would not bring a criminal case to a grand jury over Lerner’s refusal to testify before the House Oversight and Government Reform Committee in March 2014. The House approved a criminal contempt resolution against Lerner in May 2014, and Machen’s office has been reviewing the issue since then....Lerner cited her Fifth Amendment right not to incriminate herself during congressional testimony on March 5, 2014, although then-Oversight Chairman Rep. Darrell Issa (R-Calif.) said she had waived that right by giving an opening statement at a hearing 10 months earlier when she asserted her innocence. Issa wanted her charged by the Justice Department with criminal contempt of Congress for failing to answer questions about her role in the scandal.”