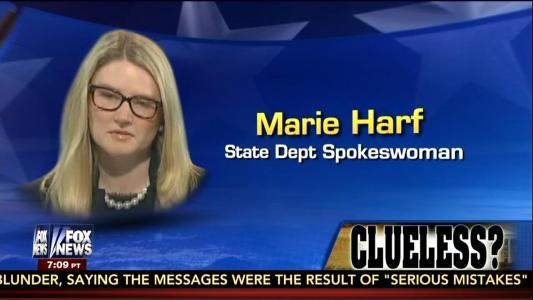 State Department spokeswoman Marie Harf’s statement that “we cannot win this war” against ISIS by “killing them” and suggestion that “we need...to go after the root causes” like “lack of opportunity for jobs” was even too ridiculous for a liberal like Chris Matthews to swallow. Yet this latest foreign policy embarrassment for Barack Obama’s administration has yet to be reported on any of the Big Three (ABC, CBS, NBC) network evening or morning shows.

Even Harf’s doubling-down on various cable outlets hasn’t sparked the networks to jump on the story. On Tuesday’s edition of CNN’s The Situation Room the spokeswoman told host Wolf Blitzer that her policy prescription for combating terrorists “might be too nuanced” for her critics. Harf also refused to walk back her statements in her Wednesday appearance on MSNBC’s Morning Joe.

The question has to be asked: Would the networks sit on an equally-embarrassing statement on such a serious topic if it came on the watch of a Republican president?

Harf’s stubborn commitment to her jobs for jihadis strategy was just too much for Fox News host Sean Hannity and Lt. Colonel Ralph Peters, as the two ripped into her on Tuesday’s edition of Hannity:

Hannity charged: “Among all of the stupid things that I think I have heard about radical Islam, the State Department jobs program has to be ranked the highest among them. I mean because if that’s their mentality, Colonel, then maybe we should give people free housing, terrorists housing, and maybe we should get them Ferraris, and Obamacare. I’ve seen a lot of terrorists on TV that need dental work. Maybe free dental care. Maybe that will make them like us.”

Peters responded: “Marie Harf is exhibit A for the comprehensive failure of the U.S. educational system. That woman has a masters degree in international relations from the University of Virginia. Moms and dads, save your money. Now what was saying today about jobs, terrorists just need jobs? Then we give them union cards and a path to citizenship? I mean, Osama bin Laden was wealthy. Major [Nidal] Hasan, the Ft. Hood butcher - he had a job as I recall. He was a Major in the Army. Do you think the, the guy in Copenhagen, just last weekend, when he pulled the trigger, trying to kill a cartoonist and as many other Danes as he could, was he screaming ‘jobs, jobs, jobs?’ No, he was screaming ‘Allahu Akbar!’ I mean this is sheer idiocy!