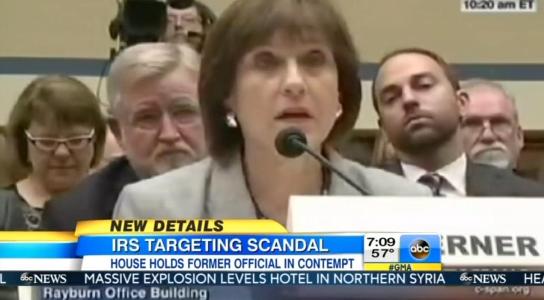 On November 5, Judicial Watch announced that the IRS admitted “that it failed to search any of the IRS standard computer systems for the ‘missing’ emails of Lois Lerner and other IRS officials.” The admission comes after the government watchdog group made a “request that a federal court judge allow discovery into how ‘lost and/or destroyed’ IRS records relating to the targeting of conservative groups may be retrieved.”

So how many Big Three (ABC, CBS, NBC) network stories have been dedicated to this latest revelation in the IRS scandal? 0.

In a statement Judicial Watch president Tom Fitton declared: “The Obama IRS couldn’t care less about the federal court’s orders to provide full information about the ‘missing’ Lois Lerner emails. Instead, the IRS, with the help of a compromised Justice Department, has engaged in a series of transparently evasive distractions...Having delayed accountability for over two years, the Obama administration is prepared to stonewall on the IRS targeting of Obama’s ‘enemies list’ until after the 2016 presidential election.”