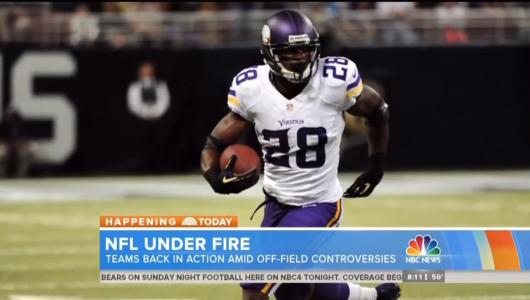 In the crucial weeks leading up to the midterm elections, the broadcast networks were obsessed with scandals, but not any of the Obama administration controversies that might influence how voters behave on Election Day. No, despite revelations in the Benghazi, IRS, Veterans Administration and Secret Service prostitution scandals it was the NFL domestic abuse scandals that captured the attention of the Big Three (ABC, NBC, CBS) networks.

Since September 4 (the start of the NFL regular season) through October 15 the networks, on their evening and morning shows, devoted a total of 171 (NBC 71, CBS 55, ABC 45) stories or briefs to five NFL players (Ray Rice, Adrian Peterson, Jonathan Dwyer, Ray McDonald, Greg Hardy) embroiled in domestic abuse cases. Number of stories on Obama scandals over that same time period? Just three. And while no one would dispute the seriousness of the charges underlying the NFL cases, the question has to be asked doesn’t the state of the body politic deserve at least the same amount of coverage as the state of the NFL?

On the September 11 NBC Nightly News, anchor Brian Williams used the type of terms usually reserved for a presidential administration cover-up: “Tonight, with the National Football League in full damage control mode, the former head of the FBI has now been called upon to head up what the league is calling an independent investigation into the handling of the whole Ray Rice case and the video evidence that has come to light.”

Over on CBS, Chip Reid used similar language on the September 22 CBS This Morning: “The latest revelations suggest that after Ray Rice was arrested for domestic violence, the Ravens organization was very concerned about protecting their star player and keeping the video under wraps.”

ABC anchor Robin Roberts, on the October 9 Good Morning America, announced: “Now to those scandals rocking the NFL, embattled Commissioner Roger Goodell meeting with all the owners for the first time on Wednesday to address those off-field problems, as one of the game’s biggest stars, Adrian Peterson, was in court in Texas on child abuse charges.”

However, the same kind of urgency expressed in the language used and in the amount of stories (171) devoted to the NFL’s scandal was not utilized in covering the latest developments in the following Obama scandals.

On October 8, the Washington Post reported senior White House officials knew that an individual with the White House advance team had a prostitute spend the night with him as part of the 2012 Colombian prostitution scandal despite the White House previously denying any involvement during the official investigation.

Network coverage: 1 full story by CBS’s Major Garrett on the October 9 edition of CBS This Morning.

On September 17, it was revealed that a whistleblower claimed the V.A. changed its final report to downplay any connection between patient deaths and long wait times. On the September 17 CBS This Morning Wyatt Andrews, in one of just two network stories on the allegation, reported: “Congress will investigate the investigators, asking why the inspector general found no link between the secret waitlist the V.A. kept in Phoenix and the deaths of up to 40 veterans...The inspector general’s final report in August concluded that it could not conclusively assert that long wait times caused the deaths of these veterans, but the line downplayed any connection between patient deaths and delays any and according to this whistleblower, it was not in the original draft of the report.”

Despite September 11 marking the second-year anniversary of the Benghazi attacks, the networks couldn’t be bothered to cover the latest developments in that Obama scandal. On September 4 two of the co-authors of 13 Hours, men who were on the ground in Benghazi, appeared on Fox News, and insisted that a  CIA official delayed a rescue attempt, it was a delay that they claimed proved deadly.

Missing e-mails, destroyed hard drives and smart phones couldn’t convince to the networks to exhaustively cover the IRS scandal during the summer, so it was no surprise when even a missing person couldn’t jumpstart network coverage. On September 3, Republican Congressman Jim Jordan sent a letter to Attorney General Eric Holder demanding to know, the information on the whereabouts of Lois Lerner’s one-time underling Andrew Strelka.

In the letter Jordan suggested the Department of Justice was hiding Strelka from the House Oversight Committee investigating the IRS-targeting scandal. Strelka is important to the case because, as Fox News.com reported, he was “employed as an attorney at the Justice Department’s tax division, until recently represented the IRS in civil lawsuits filed over the targeting. However, Strelka used to work under IRS official Lois Lerner in the exempt organizations division of the IRS.”