Charlie Rose: 'Where is the Resistance?! What Stands in the Way of Something that Clearly Threatens the Planet?' 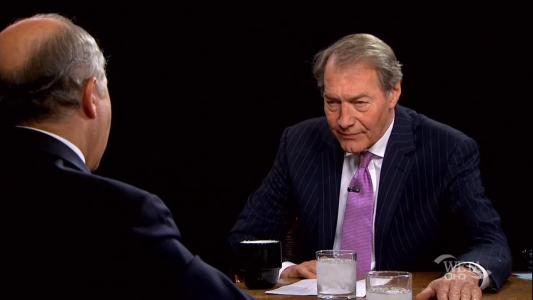 An adamant Charlie Rose, on Thursday night, was astounded that there could be any opposition to the fight against climate change as he blurted: “Where is the resistance?! What stands in the way of something that clearly threatens the planet?”

During a discussion with the foreign minister of France, on his PBS show, Rose asked Laurent Fabius what “progress is being made” at Climate Week at the United Nations General Assembly.

In his response Fabius unveiled a new and improved politically correct term to be used by the environmental left: “I don’t speak about climate change. I speak about climate disruption.” This made sense to Rose as he offered: “Change is too soft a word.”

A little later in the interview Fabius told Rose a scary story about “climate disruption” in China where “people couldn’t breathe in the street...and children couldn’t go to school.” This prompted Rose to erupt: “Where is the resistance?! What stands in the way of something that clearly threatens the planet?”

The following is a transcript of the relevant exchanges as they were aired on the September 25 edition of PBS’s Charlie Rose show:

CHARLIE ROSE: Let me turn to the U.N.G.A. There is, this is climate week here. And I think in 2014 you are going to chair the climate?

LAURENT FABIUS, FOREIGN MINISTER OF FRANCE: Yes, in December of 2015, yes, in Paris.

ROSE: What progress is being made?

FABIUS: Well, I should say that in terms of practical steps, well, there has been some progress. Maybe not enough. For instance, we have to capitalize we call green farm because you need money. And there are some countries which have announced some money but not enough. Okay. There have been, there have been lot of speeches and going all of them in the same direction, saying we have to have an agreement. Because this question of - I don’t speak about climate change. I speak about climate disruption because it’s complete disruption. And, and every single country -

ROSE: Change is too soft a word.

The local government, I mean town, regions, have decided to go in the same direction. And there is a very strong movement saying that we have to take the decision.

ROSE: Take the decision to?

FABIUS: Well, to, to halt, to stop this completely -

ROSE: Carbon in the air.

FABIUS: This situation where our world, it will be impossible to live in. And Ban Ki-Moon who is really involved in that has a great formula. And I asked Ban, “Mr. Secretary, can I use it?” He said yes. Therefore I use it. There is no plan B because there is no planet B. It’s the best summary. If we don't do it and do it quickly, because it’s not a question within 40 years or at the end of this - It’s right now! And we are the first generation to be aware of that and the last generation to be able to act.

ROSE: There’s a window of opportunity.

FABIUS: A window of opportunity and necessity.

FABIUS: Next, next year.

ROSE: My impression is that you - China is better than it has been before in its commitment?

FABIUS: Yeah, you are completely right. There are major shifts, both in U.S. attitude and Chinese attitude. President Obama, John Kerrey are completely dedicated. Obviously it is difficult for them to announce things now because you have the midterm election.

FABIUS: But I hope that they will do it at the beginning of next year. And so as Chinese are concerned, they are fully aware. It’s not a question of international pressure, it’s a question for them, for, for their own lives. Last time I was in Beijing the same day in Paris we decided to have alternate traffic because the pollution was ten percent more than the average. But the same day in Beijing it was not 10 percent more. It was 18 times the norm. And, and people couldn’t breathe in the street. And, and children couldn’t go to school.

Therefore it’s an absolute necessity. It’s very difficult for Chinese because it’s a complete shift in their economy and they need growth. But the new element you are asking is that now people understand that it’s not only constraint, it can be an opportunity which is offered. Green growth, creation of jobs. It’s a new big thing. And particularly for, for the big business.

ROSE: Where is the resistance?! What stands in the way of something that clearly threatens the planet?

FABIUS: Well the resistance is that many people think that a decision will have to be taken within 50 years. No.

ROSE: We can delay and delay?

FABIUS: No way. It has to be taken now. The resistance that all of us are conservative. We are all conservative. And it’s difficult to change our habit. We have to do it. But once more, no plan B, no planet B.

And you know at the beginning I was not a specialist of this question. But one, I have known that France has to chair it. But I’m serious and therefore I can tell you, Charlie, that really it’s the question, the big question. And we have to do it.