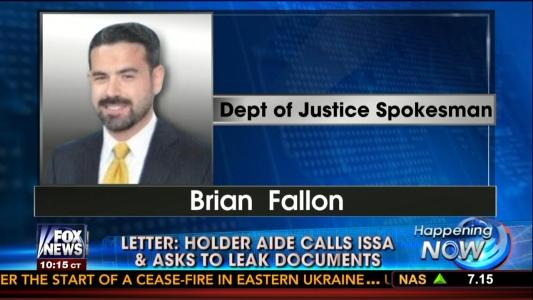 An aide to Eric Holder, who thought he was calling Democratic congressman Elijah Cummings’ office for help on leaking documents to selected reporters, accidentally spilled the beans of the latest IRS spin job because he called House Oversight Committee Chairman Darrell Issa’s office instead. This newest twist in the IRS targeting scandal, that broke last night, was not covered on ABC, CBS or NBC’s Wednesday morning shows.

According to Issa, the documents in question were related to Andrew Strelka - the former Lois Lerner employee that the committee demanded be turned over to them for questioning last week.

This isn’t the first time Cummings has been tied to the targeting scandal. In April it was revealed that Cummings office “communicated with the IRS multiple times between 2012 and 2013 about voter fraud prevention group True the Vote.” Back in March, Cummings’ shoutfest with Issa temporarily broke the network embargo on IRS scandal coverage.

On September 9, The Hill reported the following:

Could the Justice Department get some help leaking information about the IRS’s scrutiny of conservative groups? asked Brian Fallon, a top spokesman for Attorney General Eric Holder.

Apparently thinking he had reached the office of Democratic Rep. Elijah Cummings (Md.), Fallon said the department wanted congressional staffers to get documents to selected reporters so that officials could comment on them “before the majority” did.

After Issa spokesman Frederick Hill replied that Oversight Committee staffers would have to examine those documents first, the line went silent, and Fallon placed the call on hold for three minutes. When he returned to the line, Fallon was “audibly shaken,” according to an account of the conversation that Issa recounts in a letter sent to Holder.

The Justice official then said there had been a “change in plans,” that no documents would be released on Friday and that the main reason for the call was to seek a thaw in relations between the department and Oversight Republicans.

Issa said it’s clear that the Justice official meant to call Democratic staff and argued the mix-up is proof that President Obama’s administration and Cummings have been collaborating to “prejudice the committee’s work through under-the-table coordination.”

“This highly partisan and combative approach to oversight by the department shows a disregard for the independent investigatory prerogatives of Congress and a deliberate attempt to influence the course of a congressional investigation,” Issa wrote to Holder, adding that it was “unseemly” for the department to favor one party over the other when it came to sharing information.

The documents, Issa added in the letter, are about Andrew Strelka, a former Justice attorney that once worked for Lois Lerner, the ex-IRS official at the center of the Tea Party controversy.

Issa’s letter does not name the administration official or the three members of his own staff that were on the call on Friday. But Fallon acknowledged Tuesday that he spoke last week with Hill, a longtime Issa aide — an account also confirmed by a congressional aide.

In a statement to The Hill, Fallon suggested that there was nothing out of the ordinary about his conversation with Oversight Republicans.

“There is nothing inappropriate about department staff having conversations with both the majority and minority staff as it prepares responses to formal inquiries,” Fallon said. “That includes conversations between the spokespeople for the department and the committee.”

As for Hill, Fallon said following Friday’s conversation, “I guess this means he won’t be interested in having coffee.”

An Oversight Democratic staffer did not comment directly on whether aides to Cummings had ever held discussions with Justice officials similar to the conversation described in Issa’s letter.

The aide said that Cummings and his staff “make their own independent decisions about when to release information to the public and do not improperly coordinate with any executive branch agency.”

“If Chairman Issa’s account is accurate, this sounds like a dumb request from a Justice Department press staffer that Democrats never received,” the aide added.

Issa’s letter leaves some questions unanswered as well. The letter says that the Justice official asked for an Issa staffer by name before giving the pitch that was presumably intended for Cummings’s aides, raising the question of how much collaboration goes on between the Democrats and the administration. Issa added that the Justice official in question Fallon  had never called his communications department before.