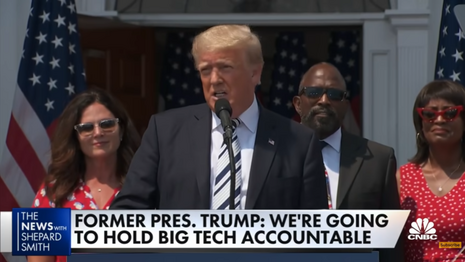 That The Washington Post can claim with a straight face that there was “no proof” of Twitter censoring conservatives when the Media Research Center has been documenting individual cases of censorship for over two years is simply ridiculous.

A Nov. 27 Post article written by three reporters brazenly claimed “[t]he right wing and conservatives for years have accused Twitter of censorship with no proof.”

That’s despite the fact that Twitter owner Elon Musk stated unequivocally days before the article’s publication that it was “correct” when conservative podcaster Dinesh D’Souza said that Twitter “[c]ensorship has been deployed as a one-way operation against conservatives.”

The Post glossed over Musk’s affirmation of Twitter censorship by teasing that he “agreed with right-wing figures on the site who accuse Twitter’s previous management of being biased against conservatives,” but only as a way of making it seem like the billionaire is misleading when “he says he’s a political moderate.”

MRC Free Speech America would also like to introduce The Post to its CensorTrack.org database, which was launched in September 2020 to specifically show the proof of the extent of Big Tech censorship of conservatives. It’s pretty convenient for the liberal rag to treat this database as though it didn’t exist. MRC Free Speech America researchers have logged 4,714 documented cases of Big Tech censorship across platforms like Twitter, Facebook, Instagram, TikTok, LinkedIn and others. Twitter alone accounted for 55 percent (2,583) of the total number of cases logged in CensorTrack.

The MRC’s exclusive database was so influential that an MRC Free Speech America study based on CensorTrack data was cited in an ongoing lawsuit from Missouri and Louisiana against the Biden administration for allegedly colluding with Big Tech to censor Americans. What’s ironic is that The Post has reported on the same lawsuit against Biden that cited CensorTrack data. One Oct. 25 story was headlined: “Cyber officials may have to testify about alleged social media collusion.”

Another MRC Free Speech America study released in 2021 showed that Big Tech overwhelmingly censored Republican members of Congress by a rate of 54-to-1 compared to congressional Democrats. But “[n]o proof,” right Washington Post?

The Post tried to act like a Twitter-rule gatekeeper by complaining that Musk “restored several major rule-breaking accounts, including former [P]resident Donald Trump’s, following an unrepresentative and unscientific Twitter poll.” Perhaps The Post forgot that Morning Consult released a survey of 2,005 registered voters in May showing that a plurality (47 percent) said  “Trump’s account should be revived.” Was that poll “unrepresentative and unscientific” too?

The Post continued, whining that Republicans were benefiting from Musk opening up Twitter to be more of a free speech platform:

On the day Musk’s purchase was finalized, Republican members of Congress saw their follower counts skyrocket. Greene gained some 37,000 followers, as did Jordan, then the chairman of the House Freedom Caucus. That same day, Democrats’ follower counts plummeted, with Warren losing nearly 19,000 followers and Schiff losing 13,000. The trend continued for days, with prominent online Republicans gaining thousands of followers and Democrats losing them.