The triggered liberals at The New York Times are having a cow over fears that Washington, D.C., won’t be able to install a censorship apparatus to root out so-called “disinformation.” 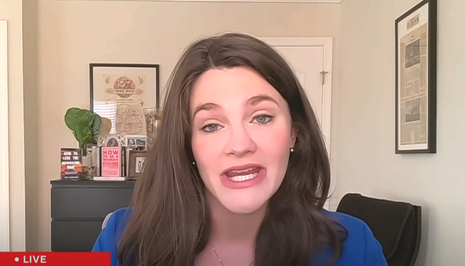 The Times published a whiny story headlined: “Disinformation Has Become Another Untouchable Problem in Washington.” The piece, plastered with a photo of a stone-faced former Disinformation Governance Board (DGB) Director Nina Jankowicz, whined that Biden’s Ministry of Truth “was dismantled — put on ‘pause,’ officially — undone in part by forces it was meant to combat, including distortions of the board’s intent and powers.”

The Times has tried for weeks to force-feed readers into believing that the DGB was a disinformation victim. Jankowicz resigned from the DGB following backlash to the Biden administration’s attempt to control the flow of information online.

The Times lost its marbles over the possibility that a biased referee for the Biden administration may not be created to govern the narrative on current events before the 2022 midterm elections:

There is wide agreement across the federal government that coordinated disinformation campaigns threaten to exacerbate public health emergencies, stoke ethnic and racial divisions and even undermine democracy itself. The board’s fate, however, has underscored how deeply partisan the issue has become in Washington, making it nearly impossible to consider addressing the threat. The failure to act, according to experts, has left openings for new waves of disinformation ahead of November’s midterm elections.

Way to just gloss over the fact that the current federal government that would run a disinformation enforcement apparatus just happens to be run by woke Democrats.

The liberal newspaper even attempted to paint Jankowicz as a DGB martyr: “Ms. Jankowicz became a focus of the furor, targeted online by false or misleading information about her role in what critics denounced as a Ministry of Truth.”

Jankowicz has a history of spreading misinformation herself. She spread false Trump-Russia collusion talking points ranging from the debunked Alfa Bank narrative from 2016 to praising a speech that parroted the debunked Steele Dossier. She even tried to dismiss the now verified New York Post Hunter Biden laptop story as a “Russian influence op.” Of course, The Times didn’t mention any of this.

Instead, The Times repackaged the generic “Republicans Seized” and “Republicans Pounce” mantras to label First Amendment concerns around the DGB as a partisan issue. “In Washington, there is not even agreement on the threats, with Republicans seizing on the fight against disinformation as an effort to silence conservative voices,” the story says. “Conservative commentators, including Jack Posobiec, pounced, joined by conservative media and Republican officials.”

Conservatives are under attack. Contact The New York Times at 1(800) 698-4637 and demand it stop shilling for Biden’s defunct Ministry of Truth.