Clinton stooge Robert Reich seemed to forget the meaning of the word “contradiction” while attacking the world’s richest man’s libertarian views on the internet. 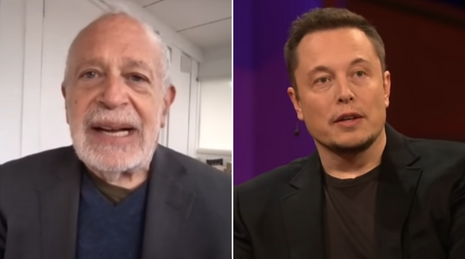 The former Secretary of Labor scaremongered to his readers how Tesla CEO Elon Musk’s “vision for the internet is dangerous nonsense.” But then Reich immediately contradicted himself in the subheadline for his April 12 Guardian op-ed: “Musk has long advocated a libertarian vision of an ‘uncontrolled’ internet. That’s also the dream of every dictator, strongman and demagogue.” Uh, what? Apparently Reich doesn’t understand the definition of the word “libertarian": “Libertarians are classical liberals who strongly emphasize the individual right to liberty.” 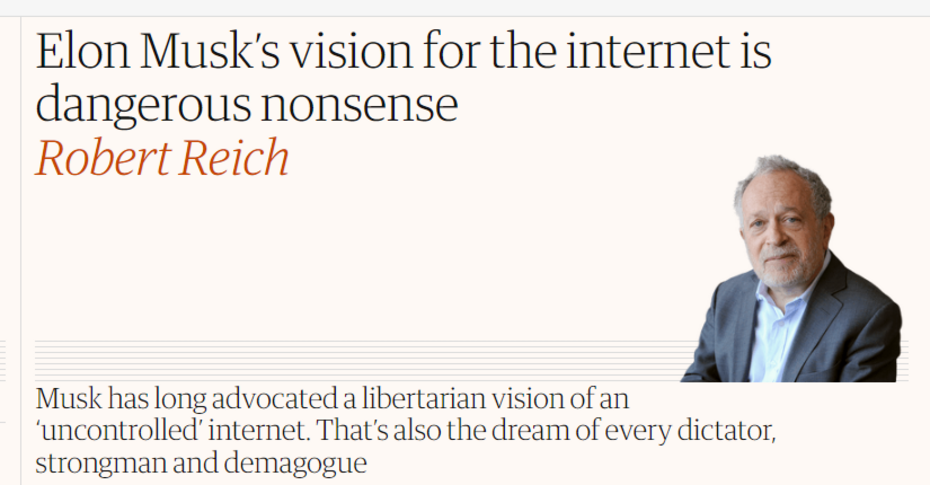 Ah yes - the authoritarian dream of a free, open, and uncensored internet. pic.twitter.com/uI19hJmUjo

The contradiction was apparently so bad that Reich’s sub-headline was changed within hours of publishing it: “Musk now faces no limit on how much of Twitter’s stock he can buy. He’ll buy as much as he needs to gain total control.” However, he argued against himself again by saying that Musk’s libertarian view of a free internet was bad because it needs a Big Tech oligarch who can pull the strings in the twelfth paragraph:

Musk has long advocated a libertarian vision of an ‘uncontrolled’ internet. That vision is dangerous rubbish. There’s no such animal, and there never will be. Someone has to decide on the algorithms in every platform – how they’re designed, how they evolve, what they reveal and what they hide. Musk has enough power and money to quietly give himself this sort of control over Twitter, [emphasis added.]

Earth to Reich: You can’t accuse someone of wanting a free internet then make him seem like he wants to be a dictator.

But Reich wasn’t finished. He then took a nosedive into whining and blatant hypocrisy:

Musk has never believed that power comes with responsibility. He’s been unperturbed when his tweets cause real suffering. During his long and storied history with Twitter he has threatened journalists and tweeted reckless things, [emphasis added.]

Quite a lecture coming from the same guy who tweeted “‘Democratic senators should have given [Sen. Kyrsten Sinema (D-AZ)] the backs of their hands.” Reich reportedly said this following Sinema’s vote against killing the Senate filibuster.

Conservatives are under attack. Contact The Guardian at guardian.readers@theguardian.com and urge it to defend free speech online.