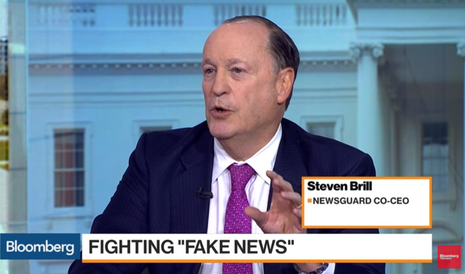 The firm’s report headlined, “Special Report: The U.S. Best and Worst of 2021,” claimed to “identify the misinformation websites with the most online engagement in 2021 in the United States.” In addition, NewsGuard alleged, “We also highlight a selection of the trustworthy sites that are producing reliable journalism, including for local and niche markets.”

NewsGuard had two lists sub-headlined “The Ten Most Influential Misinformers” and “The Ten Top ‘Trustworthy and Trending’ Sites,” respectively.

Not surprisingly, NewsGuard labeled websites like The Federalist, Newsmax, LifeNews, LiveAction and ZeroHedge “misinformation,” and mostly left-wing propaganda websites like NPR, The New York Times, The Guardian, The Washington Post and NBCNews.com “trustworthy.”

Two of the outlets panned by NewsGuard smacked down the firm as completely biased and unreliable in exclusive comments to MRC’s Free Speech America.

NewsGuard flogged Newsmax, which received an absurd 35/100 score, for allegedly publishing “false and unsubstantiated claims about vaccines and COVID-19.” Newsmax said in a statement to MRC’s Free Speech America that it “strongly supported both the effectiveness of vaccines and CDC efforts to contain COVID. We frequently quote top medical experts for our reports. Not every medical expert agrees with all government policies, and Newsmax will occasionally publish such disagreements.”

Newsmax then slammed NewsGuard: “News[G]uard is a leftwing media ‘critic’ that smears conservative media in favor of liberal outlets, as their ranking lists so well demonstrate. News[G]uard has no credibility as a neutral observer.”

The outlet is spot on. A recent study by MRC revealed that NewsGuard’s ratings system, which scores websites on a zero to 100 scale, is extremely biased in favor of left-wing news outlets. In summary, the study showed that the average NewsGuard score for the “left” and “left-leaning” outlets was 93/100, while the average rating for “right” and “right-leaning” outlets was a low 66/100. That’s a 27-point disparity.

LifeNews, which got a 30/100 rating, was smeared for allegedly publishing “false health claims about abortion safety and about COVID-19.” The outlet’s founder, Steven Ertelt, told MRC’s Free Speech America that “NewsGuard is not a legitimate fact-checking outlet, but rather it's a biased left-wing web site run by former liberal media staffers that presents a one-sided view falsely alleging that pro-life content is not factual simply because it disagrees with the content.”

Also notable – NewsGuard favored leftist media outlets in its special report by linking to all members of its top 10 “Trustworthy and Trending” sites, while not linking to a single outlet on the top 10 “Influential Misinformers” list.