Philanthropy Roundtable board member Vivek Ramaswamy blasted Big Tech for its unconstitutional censorship in a Fox News appearance. He argued that the government was using private companies as a backdoor to do what it could not do legally in an effort to subvert the First Amendment. 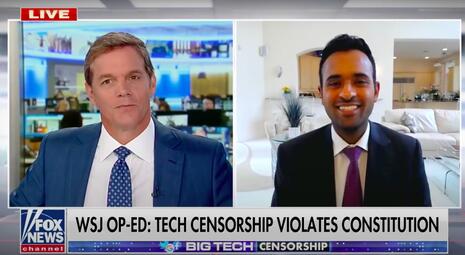 Ramaswamy, who is also founder of Roivant Sciences and author of upcoming book, Woke, Inc.: Inside Corporate America’s Social Justice Scam, appeared on the Monday edition of America’s Newsroom on Fox News where he insisted that Big Tech censorship violates the U.S. Constitution. After acknowledging that private companies are typically, of course, free to decide what appears on their own websites, Ramaswamy explained that this is not an ordinary situation:

“[I]t’s different when private companies coordinate directly with the government, respond to government threats, and are cloaked with the benefit of government provided immunity to do indirectly through the backdoor what the government cannot directly do under the Constitution.”

Ramaswamy went on to note that the Supreme Court has been clear that “government cannot dispatch its dirty work to private companies when the government can’t do that directly, and nowhere is that more important than in the case of censorship.” Ramaswamy supported this statement further in his recent Wall Street Journal OpEd with numerous case law references.

Host Bill Hemmer brought up an example when, in September of 2020, Facebook founder and CEO Mark Zuckerberg said that his company was working with the CDC in order to suppress content related to COVID that the CDC determined was not accurate. Hemmer noted, “That had a lot to do with the Wuhan lab leak. But once the thinking on that changed, they had to reverse course.”

Ramaswamy then explained those examples in more detail:

“Section 230 is the blanket of immunity. There are clear government threats from Congressmen and Senators at every level threatening companies to say that if they don’t deplatform Trump, actually, and certainly if they don’t censor misinformation and hate speech, they’re gonna be regulated. And further, these companies willfully coordinated with the government to take down information that the government didn’t want to see. That is not the action of a private company, that is the action of the state in the garb of private enterprise.”