Sandberg, who has donated abundantly to Planned Parenthood and a myriad of liberal members of Congress, said in a Jan. 11 Reuters interview Facebook’s guidelines clearly state calls for violence are not permitted. She explained that the platform took down posts it decided were inciting violence. She then rationalized the move: “In this moment, the risk to our democracy was too big, that we felt we had to take the unprecedented step of what is an indefinite ban, and I’m glad we did.” 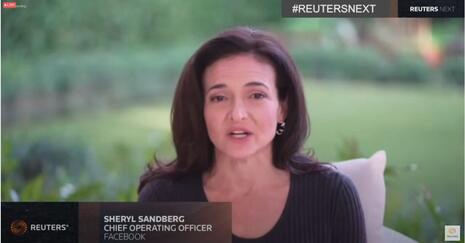 Tesla CEO Elon Musk used a meme to accuse Facebook of being partly responsible for the riot. The meme, which Musk captioned “This is called the domino effect,” showed a man knocking over a series of small to very large dominoes. The smallest one was labeled “a website to rate women on campus,” a seeming reference to how Facebook got its start as “Facemash.” The largest domino was labeled with a New York Times journalist Mark Leibovich quote: “The Capitol seems to be under the control of a man in a viking hat.”

But Facebook executive Sandberg disagreed with the accusation that Facebook was responsible for the riot. She denied that the Capitol riot was organized on Facebook, saying it was instead mainly organized on other “platforms that don’t have our abilities to stop hate, don’t have our standards and don’t have our transparency.” She did not elaborate on which platforms she believes hosted the majority of the organizing.

Sandberg was specifically asked about whether “other world leaders” who have “arguably incited violence,” such as Brazil’s president Jair Bolsonaro and President Rodrigo Duterte of the Philippines, could be treated like Trump and have their accounts suspended. Sanderg replied, “Absolutely. Our policies apply to everyone.” Bolsonaro has been accused of violent rhetoric that led to his own stabbing. The UN accused Duterte of rhetoric that could be viewed as “permission to kill.” To date, however, their accounts have not been suspended in the same manner as Trump.

Facebook announced on Jan. 6 that it was suspending Trump’s account “indefinitely,” and Sandberg said that there were no plans to end the suspension at this time. In Sep. 2019, Facebook made it clear that politicians were exempt from its hate speech rules and from fact checking. In June 2020, CEO Mark Zuckerberg appeared willing to reconsider that position in light of concerns over some of Trump’s comments, specifically “when the looting starts, the shooting starts.” In a late June post, he clarified new policy changes to say that “there is no newsworthiness exemption to content that incites violence or suppresses voting.”

Others besides Elon Musk, including a Los Angeles Times columnist and even Politico, have placed some of the blame for the riot on Facebook and other social media platforms. However, in removing support for free speech site Parler, companies such as Apple, Google and Amazon implicated the platform for a role in the riot. Apple reportedly suggested that Parler contains “direct threats of violence and calls to incite lawless action.”

Conservatives are under attack. Contact Facebook headquarters at 1-650-308-7300 or 1-650-543-4800 or Instagram at support@instagram.com and demand that Big Tech be held to account to provide clarity on “hate speech,” rules that seem to be applied inconsistently. If you have been censored, contact us at the Media Research Center contact form, and help us hold Big Tech accountable.