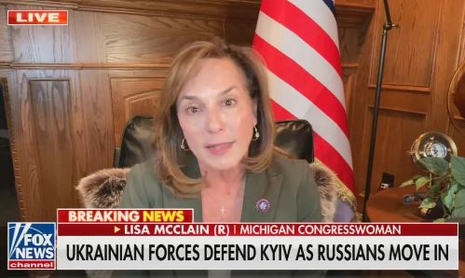 Rep. Lisa McClain (R-MI) said Twitter responded to her April 1 letter blasting the platform for going soft on Russian propaganda. But the platform completely ignored the congresswoman’s accusations of bias.

“It’s incredibly obvious from Twitter’s response that there’s one set of standards for conservative accounts, and another set of standards for every other account, including Russian dictators and Taliban terrorists,” McClain said in exclusive comments to MRC Free Speech America. “The American people deserve some truth, transparency and consistency from Big Tech.”

Last month, McClain led six other congressional lawmakers in a letter sent to company CEO Parag Agrawal. The letter highlighted that Twitter banned former President Donald Trump due to “the risk of further incitement of violence.” The signing lawmakers claimed Russia is “violating every international law, norm and custom, and is actively using Twitter to spread disinformation.” [Emphasis added].

The lawmakers asked Agrawal what Russian government accounts would need to do to qualify for a permanent suspension. Twitter ignored the lawmakers’ question and accusations of bias, according to the Twitter response letter McClain relayed to MRC Free Speech America.

“Since 2020, we have not recommended or amplified state-affiliated media accounts from

Twitter also paid lip service to its “responsibility to the public – particularly during periods of crisis.” According to the Twitter response letter McClain sent MRC, Culbertson added that her platform has obligations to proactively enforce its rules, “preserve access” to Twitter, elevate “credible and reliable information,” and to guard against efforts to “manipulate” public conversation.

MRC Free Speech America reported in February that as of Feb. 28, Russian President Vladimir Putin had a combined 4.9 million followers on his two verified Twitter accounts. At the time, 22 Russian state-affiliated accounts collectively had a collective total of 17,906,200 Twitter followers.