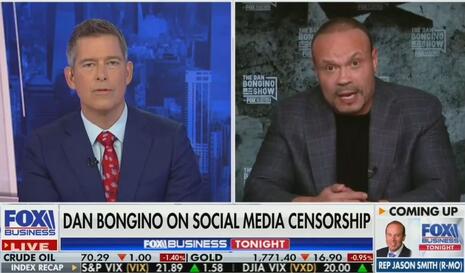 Bongino, a prolific user of the free speech-oriented video platform Rumble, explained on the Fox Business Network's Fox Business Tonight why he thinks free speech platforms are growing. “I think a lot of people are fascinated by the idea of an entirely parallel economy, and one committed to what was initially the purpose of the internet, Sean, to be free and fair.”

He later said, “you’re seeing [free speech platforms] all come together, Sean, and saying, ‘We’re committed to free speech and open conversation,’ and there’s a real, there’s a huge market for that.”

Bongino said that Big Tech censorship has aided the “flowering” of free speech-oriented platforms. He added, “This is the first time in history there’s an entire market – Rumble, Parler, other companies, GETTR, TM[T]G, Truth Social, that are going to develop by saying, ‘Listen, we’re not these idiots at YouTube, Facebook and Twitter. We’re committed to free speech.’”

Duffy asked Bongino whether the new companies have acquired the necessary technical talent to succeed. Bongino referred to the popular “myth” that “Silicon Valley’s all populated by liberals,” or that “[t]hey’re not going to work at these types of [free speech] companies.”

He argued against the stereotype, saying that “tech’s a global market, and one, there are a ton of U.S. citizens who are patriots, who are smart. It’s just so derogatory to talk about us like that.”

He pointed out that free speech is not always a partisan cause. “We’re appealing to basically fifty to seventy-five percent of America that believes in free speech,” said Bongino. He cited liberal Rumble users like liberal journalist Glenn Greenwald, comedian and actor Russell Brand and former Hawaii Congressman Tulsi Gabbard (D) as evidence of the platform’s diverse pool of influencers.

The Media Research Center joined the growing group of thought leaders on Rumble in April 2021. MRC President L. Brent Bozell said at the time: “I am proud to announce that the Media Research Center is officially on Rumble. As Big Tech uses its monopolistic grip over speech to silence conservatives, it is ever more important to adopt and support social media platforms that defend our freedom of speech. Starting now, you can find MRC’s video content on Rumble. Follow us and help us fight back against Silicon Valley’s leftist agenda!”