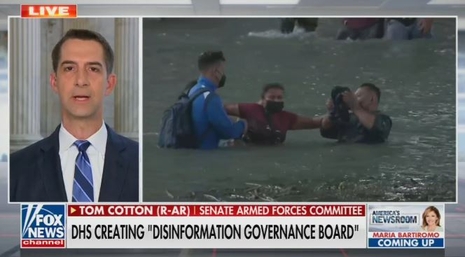 “The Department of Homeland Security and, frankly, no other department or agency in our government should have something called a ‘disinformation board,’” Sen. Cotton said Thursday in an interview on Fox News Channel’s “America’s Newsroom with Bill Hemmer and Dana Perino.”

“Disinformation, for this administration, is mostly facts that are inconvenient politically for Joe Biden and the Democratic Party,” the senator warned.

“They're willing to twist language to fit their own needs. Alejandro Mayorkas won't even call illegal aliens ‘illegal aliens’ - when that is what they are called in federal law,” Cotton noted. “Anything else that they don't like over at DHS or the White House now just gets dismissed as disinformation.”

“Because the Democrats see the polls slipping away from them, because they don't support the idea of free speech anymore, now they’ve labeled everything as disinformation or misinformation that doesn't fit into their preconceived storylines,” Sen. Cotton added. “This should not move forward and we should take steps in Congress to make sure it doesn't move forward.”

“DHS is failing right now at some of its core responsibilities, like protecting our border. They shouldn't be branching out and becoming censors, along with social media companies and other major media companies,” Cotton said.