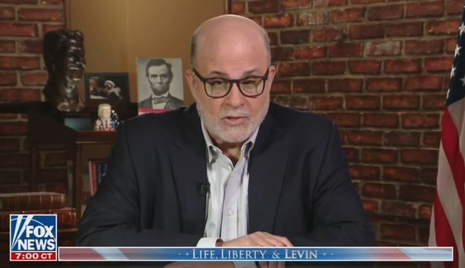 January 8, 2021, Levin tweeted that he was discontinuing use of Twitter due to “Twitter’s fascism”:

I have suspended my own Twitter account in protest against Twitter’s fascism. I ask all my followers to join me now on Parler and Rumble.https://t.co/XswC88juiGhttps://t.co/1YeTi0ywBk

Thanks to new ownership, I’ve decided to come back! 😊

After thanking Sen. Ted Cruz (R-Texas) for welcoming him back to Twitter, Levin then posted a link to a Top-20 list rating his “Thanks to new ownership, I’ve decided to come back!” post the top tweet of the day:

He followed up by greeting his followers once more, linking to a Newsmax story about his return.

Then, Levin got down to business.

White House Press Sec. Jen Psaki was the subject of two of Levin’s posts on Monday. In the first, he pointed the hypocrisy of her voicing concern about social media propaganda, now that Twitter has been purchased by a proponent of free speech:

MSNBC’s mouthpiece in the Oval Office is suddenly concerned about big tech? How about Comcast’s ownership of NBC & MSNBC? And the harm these leftwing propaganda mills do to our country? Joy Reid, Tiffany Cross, Scarborough, et al. Psaki will fit right in with these reprobates.

PSAKI: No matter who owns or runs Twitter, the president has long been concerned about the power of large social media platforms, the power they have over our everyday lives. He's long argued that tech platforms must be held accountable for the harms they cause.

“Repugnant Psaki,” Levin declared in a subsequent post, responding to Psaki’s claim that a border wall “was never going to work” to stop illegal immigration.

“The corrupt media and the Jan 6 Stalinist committee leakers lying yet again,” Levin tweet Tuesday, linking to an article debunking liberal media claims that, in 2021, then-House Minority Leader Kevin McCarthy (R-Calif.) wanted President Trump to resign due to the January 6 invasion of the U.S. Capitol.

Everyone despises McConnell, especially Republicans, yet GOP senators keep making him their “leader”https://t.co/RISsbjnzGK

To back up his claim that “Everyone despises McConnell,” Levin linked to an article detailing results of a Morning Consult poll finding that, among voters in their own states, McConnell is the least popular senator, with sixty percent of his constituents voicing disapproval of his job performance.

“Free speech is a God-given human right, it's not the social engineering that the left is used to,” Levin declared in a post on Tuesday.