Rep. Stefanik Asks ‘Why Does This ONLY Happen to Conservatives?’ When Twitter ‘Error’ Suspends Comm Director 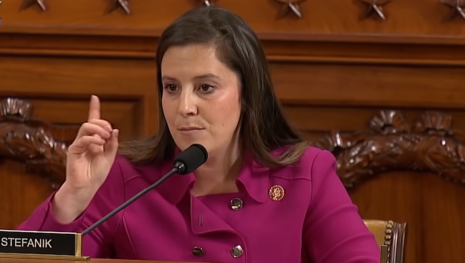 Rep. Stefanik called the suspension of Communications Director Karoline Leavitt’s Twitter account “an unconstitutional overreach SILENCING our voices and freedom of speech,” but vowed that “Republicans are united in fighting back against Big Tech’s tyranny. Millions of Americans will not be silenced!”

Later on Thursday, CNN Correspondent Donnie O’Sullivan replied to Stefanik, tweeting the news that Twitter claimed it had suspended Leavitt in “error” and that the account has been restored:

“Twitter spokesperson says @kc_leavitt's was suspended in ‘error.’ Adds, "This has been reversed, and the account has been reinstated. The account's followers will take 24-48 hours to fully restore."

Leavitt retweeted Stefanik’s post with a comment reaffirming that she’d “been released from Twitter’s Conservative Jail” – but, disputing that the suspension had been an “error”:

“BREAKING: It appears I’ve been released from Twitter’s Conservative Jail

“This was not an ‘error,’ as Twitter claimed. This was another purge in their ongoing effort to silence conservatives voices! We cannot back down to Big Tech Giants! Our movement is too important!”

“Why does this ONLY happen to conservatives?! Absolutely outrageous. Because Big Tech is corrupt. That’s why,” Rep. Stefanik tweeted in response to O’Sullivan’s post.

Social media platform claims of “errors” in censoring conservatives are nothing new, such as when Facebook Founder and CEO Mark Zuckerberg testified that the flagging of pro-Trump celebrities Diamond and Silk was caused by an “enforcement error.”