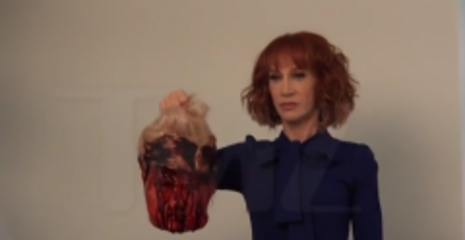 “Just resign now. You lost. It’s over,” Griffin tweeted tweeted to Trump, embedding the “severed head” photo on Wednesday at 6:12PM, after a mob broke into the U.S. Capitol during a pro-Trump rally in D.C. Griffin was replying to a Trump post that is no longer available.

“The DOJ contacted me within hours of posting an offensive photo of Donald Trump,” Griffin tweeted to the DOJ on Thursday, referring to 2017 “severed head” photo, which prompted a visit from the Secret Service.

In her Thursday tweet, Griffin replied to a DOJ tweet requesting information that could help identify those who had stormed the Capitol – contrasting the ease with which the Justice Department had identified her with its ongoing efforts to identify Wednesday’s mob:

“With all due respect, you work for the Department of Justice. The DOJ contacted me within hours of posting an offensive photo of donald trump. Hours. There is ample evidence all over the Internet clearly identifying thousands of these actual terrorists.”

Last October, after Trump tested positive for the potentially-deadly coronavirus, Griffin send another ominous tweet to the president, snarking that she’d “like to volunteer to be your caregiver.”

Five months earlier, Griffin posted a tweet insinuating she’d like someone to stick a deadly air-filled syringe into Trump’s arm.

The image of Griffin holding up the president’s “severed head” prompted widespread public condemnation in 2017 – so much so that Griffin was forced to issue an apology. CNN felt so much heat that it severed ties with Griffin, firing her from her scheduled gig on its New Years Eve program.

Editor's Note: This blog was first published on CNSNews.com.