No one in the media or in tech companies bats an eye when football players kneel during the national anthem as a protest. But when a football player tries to offer an inspirational message of faith, Twitter censors it as “potentially sensitive content.”

“We get to trust an unknown future to a known God, because we know how much he loves us,” said former Heisman Trophy winner Tim Tebow in a video posted to his Twitter page. The athlete looked as if he was finishing a heavy workout, offering a message of hope to his followers. But Twitter found this video to be potentially sensitive content, covering it up with an interstitial, or filter. 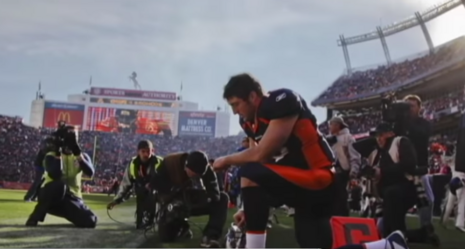 A Twitter spokesperson told the Media Research Center that “It was a mistake and has since been corrected.”

Twitter has a habit of censoring both Christian content and pro-life content regularly. The platform suspended the account for the pro-life film, Unplanned, and prevented users from following the account. More recently, the platform has been cracking down on conservatives, even President Trump himself.

“Right where you’re at, whatever you’re doing, whatever you’re going through, He loves you. You were enough for His Son to die on the cross. That’s how much you’re loved. Hold on to that in your time of need,” Tebow ended his video. While many Christians might find that uplifting during these troubled times, Twitter slapped a “potentially sensitive content” label on it.

Conservatives are under attack. Contact Twitter on the platform @TwitterSupport and demand that the platform provide transparency: Companies need to design open systems so that they can be held accountable, while giving weight to privacy concerns. If you have been censored, contact us at the Media Research Center contact form, and help us hold Big Tech accountable.