Facebook, Twitter, and YouTube all worked in concert to mass censor material from President Donald Trump, his son, Donald Trump Jr., and a Facebook event hosted by the Tea Party Patriots that involved doctors discussing COVID-19.

Yet these tech companies are about to be grilled in Congress on July 29 at an antitrust hearing. 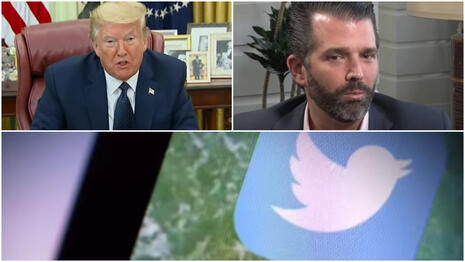 “The Big Tech Gestapo are at it again! Facebook, Google, and YouTube went insane yesterday and again shut down free speech, removing a viral @BreitbartNews video of a @TPPatriots event. Big Tech can’t be allowed to choose whose voice is heard,” said MRC President and founder L. Brent Bozell on Twitter.

After a video hosted by the Tea Party Patriots on Facebook went viral, Facebook, Twitter, and YouTube took down the video, which was a press conference hosted by America’s Frontline Doctors, even though it had been shared by President Trump and his son, Donald Trump Jr.  Both their Twitter accounts were censored. According to Breitbart, the video had 17 million views over the eight hours it was allowed on Facebook. Breitbart was also suspended from Twitter for sharing the video.

President Trump had retweeted a video that showed doctors discussing COVID-19 in front of the Supreme Court building. According to NBC News, the tweet was removed by Twitter. A spokesperson from the company told NBC, “Tweets with the video are in violation of our COVID-19 misinformation policy." Several tweets from Trump have been censored, with an interstitial, or cover, placed in front of the tweet. But this tweet, along with others mentioning the video, was removed without warning.

Donald Trump Jr. was also suspended from Twitter after he had tweeted the same video discussing hydroxychloroquine, with the caption, “This is a must watch!!! So different from the narrative that everyone is running with.” According to Republican strategist Andrew Surabian, who reported the suspension, “Big Tech is the biggest threat to free expression in America today & they're continuing to engage in open election interference - full stop.”

Twitter denied that Trump Jr. had been suspended, telling Vice Media that it was a “temporary lockout until the Tweet is deleted—not a suspension."

The New York Times tech columnist Kevin Roose had tweeted about the video while it was still trending, which prompted Facebook to take the video down. Roose is still tracking the video, mentioning that popular conservative entertainers Diamond and Silk still had the video on their page.

Facebook spokesperson Andy Stone commented on Roose’s thread, saying, “Yes, we removed it for sharing false information about cures and treatments for COVID-19.” He also mentioned that anyone who had engaged with that video would receive messages that the video was “misinformation” and be directed to the World Health Organization (WHO). Conservative pundit Robby Starbuck pointed out that Stone used to work for the Democratic Congressional Campaign Committee.

Breitbart was suspended from Twitter for hosting the video stream on Periscope, Twitter’s live video app. YouTube, Google’s sister company, followed suit, removing the video from its platform. “This video has been removed for violating YouTube’s community guidelines,” said the message on the screen.

On July 29, Facebook CEO Mark Zuckerberg, Google/Alphabet CEO Sundar Pichai, Apple CEO Tim Cook, and Amazon CEO Jeff Bezos are appearing before the House Subcommittee on Antitrust, Commercial, and Administrative Law. The hearing will be led by Rep. David Cicilline (D-RI). It would appear that Facebook and Google, YouTube’s sister company, would be acting together to curry favor with the House Democrats.

These tech companies arbitrarily apply their rules and standards only when it appears to hurt the conservative movement. Facebook still allows violent Antifa groups and pages on its platform. Iran still has accounts on Facebook and Twitter.