Guterres called for more censorship during the Digital Transformation session of the G20 Summit on Nov. 16.

But then again, Guterres previously praised the “great achievements” of the Chinese Communist Party (CCP), so it’s hardly surprising he wants restrictions on speech.

Guterres began his recent remarks by calling for a freer internet, portraying himself as a free speech advocate and noting the “harm” of “suppression of free speech.” He also called for “fewer barriers” online. So far, so good. But Guterres was quick to explain that free speech does not include supposed “disinformation.”

“But free speech is not a free pass,” Guterres stated. “The Global Digital Compact should consider the responsibility of governments, tech companies and social media platforms to prevent online bullying and deadly disinformation that undermines democracy, human rights and science.”

The UN head then called for a global internet “code of conduct.” 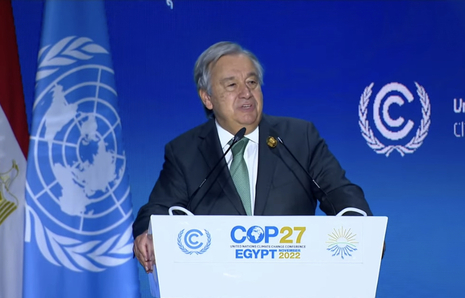 Guterres and the UN have supported authoritarian governments and movements. The UN called legitimate Israel an “apartheid” state, for instance, while ignoring anti-Israel terrorists’ control of the Palestinian people.

But Guterres also seems to admire China. In April 2018, Guterres traveled to China and the UN released his highly complimentary sentiments on the CCP, which had been persecuting Chinese Catholics and Xinjiang’s Uyghurs at that point.

Guterres paid “tribute” to China’s “commitment to peacekeeping,” and said “the United Nations continues to count on China’s leadership and commitment to the implementation of the 2030 Agenda.” The 2030 Agenda is a plan to make the world more authoritarian, including through woke environmental, social and governance (ESG) standards. The UN press release doesn’t once mention Guterres challenging or questioning the CCP.

Then, in May 2021, Guterres was particularly laudatory in his message for the centenary of the CCP, according to a readout of his phone call with Chinese President Xi Jinping. Guterres said “the United Nations highly appreciates China's great achievements in the country's poverty alleviation, as well as its firm support for multilateralism and the work of the United Nations,” according to the Chinese government’s readout of the call.

Guterres highlighted China’s “vital” role, saying the UN looked forward to “closer cooperation with China,” according to the readout.

China runs a vast censorship enterprise. Former White House National Security Council Chief of Staff Alexander Gray previously told MRC that China practices “civil-military fusion,” where everything in the economic and tech spheres is accessible to the Chinese military. That includes data held by Chinese tech companies (including U.S. data). The CCP is also responsible for up to 500 million deaths.

Conservatives are under attack. Contact your representatives and demand that Big Tech be held to account to mirror the First Amendment and provide transparency and an equal footing for conservatives. If you have been censored, contact us using CensorTrack’s contact form, and help us hold Big Tech accountable