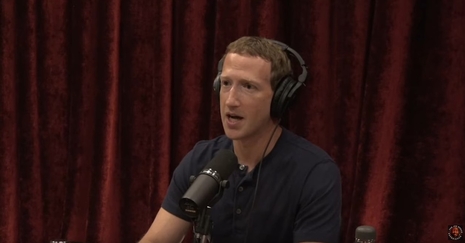 Zuckerberg went on Rogan’s podcast Aug. 25, and Rogan asked him about how Facebook deals with supposed “misinformation,” specifically highlighting the Hunter Biden laptop scandal. Big Tech censored the Biden scandal just before the 2020 election, an action which the Media Research Center revealed helped Big Media and Big Tech steal the 2020 election for President Joe Biden. Zuckerberg readily admitted that the Federal Bureau of Investigation (FBI) had pressured his platform to censor content.

“I mean, basically the background here is the FBI, I think, basically came to us, [to] some folks on our team, and was like, ‘Hey, umm, just so you know, like, you should be on high alert. There was—we thought that there was a lot of Russian propaganda in the 2016 election. We have it on notice that basically there’s about to be some kind of dump of, of—um, uh—that’s similar to that. So just be vigilant.’”

Zuckerberg then tried to claim that Facebook’s response had actually been pro-free speech—in comparison to Twitter’s censorship of the story. “So our protocol was different from Twitter’s,” Zuckerberg said. “What Twitter did is they said, ‘You can’t share this at all.’ Um, we didn’t do that.”

“What we do is we have, um—if something is reported to us as potentially, um, misinformation, important misinformation— We also have a third-party fact-checking program. We don’t want to be deciding what’s true and false. And for the, I think it was, five or seven days when it was basically being, um, being determined whether it was false, um, the distribution on Facebook was decreased, but people were still allowed to share it.”

Zuckerberg then explained how Facebook suppressed the Hunter Biden laptop story while the platform’s fact-checkers reviewed it. “The ranking on [Facebook’s] newsfeed was a little bit less,” Zuckerberg said. "So, fewer people saw it than would have otherwise.”

Rogan asked if Zuckerberg had a percentage as to the change in readership because of that censorship.  Zuckerberg said he had no exact number, but added, “It’s meaningful.”

Zuckerberg then attempted to defend Facebook’s biased censorship. “We just kind of thought, hey, look, if the FBI—which, I still view as a legitimate institution in this country; it’s a very professional law enforcement — they come to us and tell us that we need to be on guard about something, then I want to take that seriously.”

Rogan inquired if the FBI had asked for censorship of the Hunter Biden scandal specifically. “Did they specifically say you needed to be on guard about that story?” asked Rogan. “No. I don’t remember if it was that specifically, but it was—it basically fit the pattern,” Zuckerberg answered evasively.

Both Facebook and Twitter silenced the bombshell New York Post reporting implicating President Joe Biden’s son Hunter in corrupt foreign business dealings, and Facebook did so before any fact-checks were issued on the story. A Newsweek analysis showed that the Post’s story reached about 1.94 million people, whereas anti-Trump stories reached roughly 5.37 million people.

All Facebook fact-checkers must be approved by the Poynter Institute’s International Fact-Checking Network. Poynter has been funded in part by leftist billionaires George Soros and Pierre Omidyar.