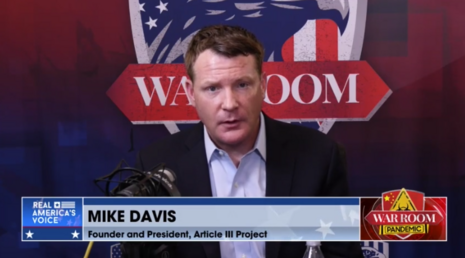 But both senators have pushed for increased online censorship before. Internet Accountability Project president and founder Mike Davis slammed the hypocrisy of the senators and Big Tech’s overall biased censorship in exclusive comments to MRC Free Speech America.

“It’s very troubling that Democrat politicians don’t consistently show the same concern for speech with which they disagree,” Davis wrote. “The right to free speech is only realized when all sides of an issue can speak freely and openly without fear of reprisal or censorship.”

Davis called out Warren specifically. “As a leading advocate for censoring those with whom she disagrees, Senator Warren’s selective outrage is shamelessly hypocritical but unfortunately all too predictable,” Davis wrote. Warren previously demanded that Amazon increase censorship of so-called COVID-19 “misinformation.”

Davis suggested this represents a double standard on Warren’s part. “When Senator Warren starts defending conservatives from being de-platformed, censored, downranked and silenced, then she should be taken seriously,” Davis said. “Until then, she should continue to be ignored as the lame partisan she is.”

Davis proposed a solution to the pro-censorship mode of operation of Big Tech, saying the U.S.’s “century-old antitrust laws” should be leveraged to hold tech “monopolists” accountable and break up Big Tech companies.

Platforms like Google, Facebook, Apple and Amazon would not be able to “get away with their leftwing censorship” if they were not monopolies and had to compete for users in the free market, Davis said.

Conservatives are under attack. Contact your representatives and demand they support free speech. Big Tech giants should afford their users nothing less than the free speech embodied in the First Amendment. If you have been censored, contact us using CensorTrack’s contact form, and help us hold Big Tech accountable.