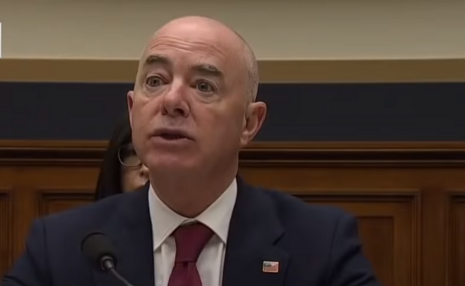 Senate Republicans alleged this in a letter Monday, as The Washington Times reported. Mayorkas said during a May 4 congressional hearing that the DGB had “not yet begun its work,” but documentation released by Sens. Josh Hawley (R-MO) and Chuck Grassley (R-IA) contradicts that.

The documents show that Mayorkas formally approved the start of the board on Feb. 24, and that the board even met with “social media companies,” including Big Tech giant Twitter, on Feb. 25 “to discuss potential of influence operations stemming from the escalating geopolitical issues.” That means the DGB was functioning and holding meetings with Big Tech companies more than two months before Mayorkas told Congress the DGB had “not yet begun its work.”

Sen. Rob Portman (R-OH), the top Republican on the Senate Homeland Security and Governmental Affairs Committee, headed up the letter, which featured signatures of six other senators, including Hawley, Rand Paul (R-KY) and Ron Johnson (R-WI).

The Republican senators also said that Mayorkas “misrepresented” the purview of the DGB, claiming it would not monitor Americans’ activities. However, statements by former DGB Executive Director Nina Jankowicz “appear to show that the Department does in fact monitor American citizens and that the Board’s work is concentrated on domestic threats,” the senators wrote.

The letter also says Mayorkas dismissed Paul’s suggestion at the May hearing that the DGB might try to control the COVID-19 masking debate, but the documentation indicates the “efficacy of masks” was a topic the DGB was interested in.

“The American public deserves transparency and honest answers to important questions about the true nature and purpose of the Disinformation Governance Board and it is clear that Secretary Mayorkas has not provided them — to the public or this Committee,” the senators wrote.

Just like George Orwell’s “Ministry of Truth,” the Biden administration’s Disinformation Governance Board is full of hypocrites who claim to be experts on stopping disinformation, even though they spread false information themselves.