YouTube CEO Susan Wojcicki proudly described her company’s censorship efforts and her pro-abortion stance during an interview at the annual World Economic Forum conference on Tuesday. Meanwhile, both she and another YouTube executive claimed that the platform is “open” or pro-free speech. 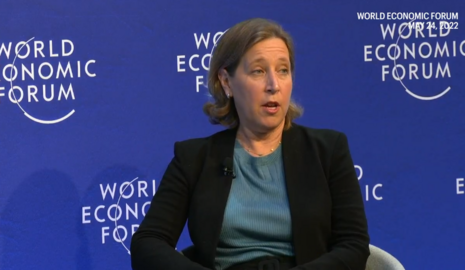 Wojcicki rambled about how essential she thinks censorship of alleged “misinformation” is, according to Reclaim The Net.

Wojcicki claimed that YouTube is a free speech platform and politically agnostic, as Fortune reported. “I believe that reproductive rights are human rights and to take away a law and a right that we’ve had for almost 50 years will be a big setback for women. But that’s my personal view,” she told Shontell.

Wojcicki said that YouTube is considering the “changes” that the repeal of Roe v. Wade could cause and “benefits” the company might offer to employees in states where abortion would no longer be available. “Running a company that has–that really focuses on free speech, we want to make sure that we’re enabling a broad set of opinions that everyone has a right to express their point of view, provided they meet our community guidelines.”

Ironically, YouTube Chief Product Officer Neal Mohan also claimed on May 20 at an event in London that YouTube is “an open platform,” one “without gatekeepers,” as Reclaim The Net reported. Mohan noted that YouTube has “robust” community guidelines but still asserted the platform does not have “anybody telling us whether our idea is good or bad.”

YouTube has come under fire for its draconian censorship over the last few years, particularly its incredibly detailed COVID-19 “misinformation” policy. Yet Mohan said he and his fellow YouTube employees should not be “arbiters of the truth.”

YouTube isn’t the only Big Tech company openly supporting abortion, however. T-Mobile expanded its employee benefits for workers traveling for abortions. There are at least 15 other companies on NewsBusters’s “Moloch List” for companies that promised to pay travel expenses for employees wanting out-of-state abortions, including tech companies Amazon, Apple, Microsoft and Tesla.