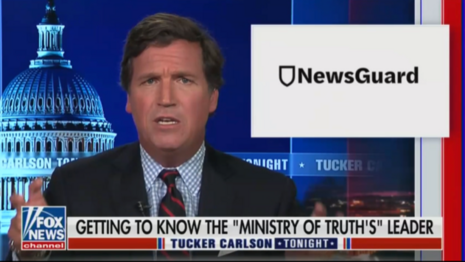 Carlson reported on the outlandish contract between Biden’s Pentagon and leftist online “credibility” arbiter NewsGuard. “Biden’s Pentagon, another group with guns, awarded a $750,000 contract to a group called NewsGuard,” Carlson began. “Now, that contract is for ‘misinformation fingerprints.’”

NewsGuard is not to be trusted, however, as Carlson elaborated. “NewsGuard is an organization that claims to fight ‘misinformation’ but, in practice, it’s a censorship organization, [it] targets anyone who challenges the people in power.”

NewsGuard is yet another organization getting involved in the Russia-Ukraine conflict, too. “NewsGuard is currently preparing a black list of sites that contradict the national security state’s talking points on Ukraine and Russia,” Carlson said.

Carlson quoted The Gray Zone editor Max Blumenthal to hammer home just how untrustworthy NewsGuard is as an objective judge. “So this week NewsGuard wrote a threatening email to the news site Gray Zone, informing The Gray Zone that they’re spreading ‘disinformation,’ ’cause they’re not reading the script,” Carlson explained.

He quoted Blumenthal, “‘Do you seriously expect us to grovel for approval from the same tentacle of the national security state and financial oligarchy that has rated CNN as a highly credible news source, and whose board of advisors is a grotesque gallery of corporate propagandists, spooks, documented liars, war criminals who have never faced a scintilla of accountability for their actions?’”

The language isn’t as much exaggeration as it seems, as Carlson noted. “Kind of overheated language. Is it true? Yeah, every word of it,” Carlson said emphatically. “So when Joe Biden’s censors come, that’s the way you respond. ‘Hey pal, up yours. You want some disinformation? Here you go.’”

Carlson concluded, “You are a free person in a free country and no law enforcement agency can ever tell you what to think or say. Period.”

NewsGuard boasted about the Pentagon partnership in a 2020 press release, saying it shows how a “Human Intelligence Solution Can Work with AI Tools” through “Misinformation Fingerprints™.”